FOLKLORE ON FRIDAY - Babes in the Woods 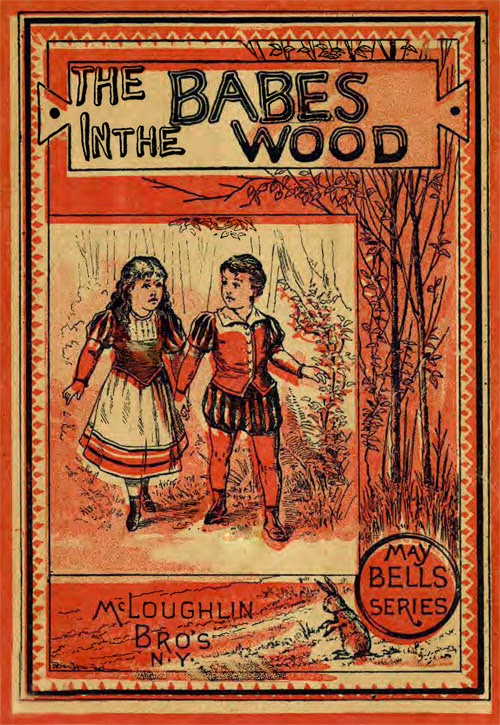 Babes in the Wood is a perennially popular pantomime (bet you can't say that quickly!*) running in many theatres up and down Britain every Christmas time. And this tale of orphaned children, wicked uncles and Robin Hood is actually one of the oldest of all the traditional pantos.

It was first performed in 1827 at the Drury Lane Theatre, London, under the title Harlequin and Cock Robin: or, The Babes in the Wood. Indeed this original title tells us just how early a pantomime this is. For the British pantomime was evolved from performances of the older Harlequinade, in turn a British development of the Continental commedia dell'arte. In the 18th century Harlequinades were performed as part of the stagings of Classical plays, usually occurring in between Acts One and Two. However in the following century, it became more popular to perform the traditional Harlequinade as part of a retelling of a traditional fairy story and the modern pantomime began to emerge.

Now while other pantomime stories come from traditional fairy tales, Babes in the Wood, while being part of the British folk traditions, has somewhat different roots. As we learned last time, the pantomime Babes in the Wood was formed from joining together the story of an old English ballad with legends about Robin Hood. The ballad story line is played out in Act One with the titular characters being rescued by Robin and his Merry Men in Act Two. However this is not the ending of the original tale - to briefly recap - a boy and girl are orphaned and fostered with an uncle. However the uncle is a wicked rogue who  hired two rogues to kill the children so he can claim their inheritance as his own. However the hired ruffians quarrel and the children are allowed to escape into a forest. However rather than being found and the wicked uncle being defeated, as the modern panto tells, in the original ballad the children starve to death and are buried by kindly robins. 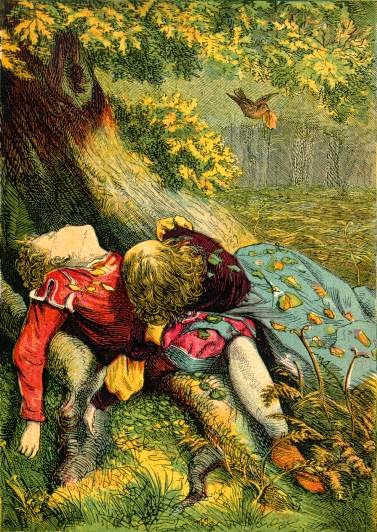 Surprisingly while the first stage version of the tale, penned by Dr. Samuel Arnold and performed in 1793, added a happy ending with the children being restored to her loving parents, the first pantomime version of 1827 retained the original's grim ending for the babes. And this was because this story was already well-known, and furthermore had been extremely popular for several centuries.

Before its theatrical incarnations, the ballad of The Children in the Wood had being reprinted many times in many different chapbook editions, and versions of it had appeared in Mother Goose collections of nursery rhymes. Hence these early stage versions stayed true to the original, for the public would be expecting the tale to have a dark and tragic end. And while Robin Hood first enters the story to save the day in an 1867 pantomime, even at the close of the 19th century the original tragic ending was retained in picture book versions from children such as the one illustrated by Randolph Caldecott from 1879.

The first known reference the ballad actually dates back to the 16th century, with a version printed by Thomas Millington of Norwich in 1595 under the somewhat unwieldy title of The Norfolk gent his will and Testament and howe he Commytted the keepinge of his Children to his own brother whoe delte most wickedly with them and howe God plagued him for it. Mercifully for librarians and humble scholars like myself, the title was soon shortened to The Children in the Wood, and indeed that is the title of the earliest complete surviving text of the ballad, a blackletter edition published in 1640. And you can read in the full text here 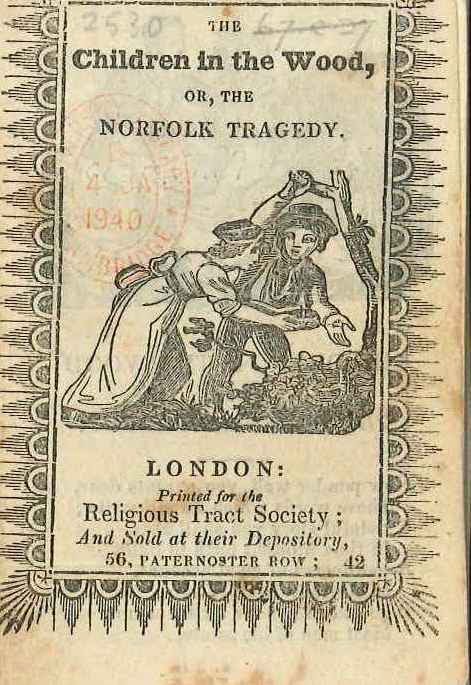 While later versions would end with the death of the babes and their robin-assisted burial, the original ballad goes further and proceeds to detail the fate of the wicked uncle -


And now the heavy wrath of God
Upon their uncle fell;
Yea, fearful fiends did haunt his house,
His conscience felt an hell:
His barns were fired, his goods consumed,
His hands were barren made,
His cattle died within the field,
And nothing with him stayed.

And it goes on to describe how his sons died young, he lost his lands and riches, and seven years after his foul plot he was arrested for robbery and died a miserable death in while rotting in gaol.

Now then the origin of the story has been much debated by folklorists. An early theory was that it originates as a piece of Tudor propaganda, essentially being a thinly disguised version of the famous accusations that Richard III murdered the princes in the tower. However while it is possibly, and indeed likely, that the tale was circulating a good deal earlier than 1595, there's no clear reason to link this ballad to Richard III. Indeed it doesn't make much sense to disguise Richard as a gentleman of Norfolk, as he had no lands or titles in that county, and furthermore the uncle's demise hardly matches the downfall of the last Plantagenet king. Given that the accusations that Richard murdered his nephews were already widely circulated by the time the ballad appeared in print, there is no reason why they would be coding the allegations in such an obtuse and cryptic manner.

The fact that it first saw publication in Norwich also suggests a different basis for the ballad. At this time ballads and tales were only printed because they were popular, and therefore we should perhaps be looking for more local origin: a well known tale told in Norfolk. And indeed a quick look at the signs for the villages of Watton and Griston seems to confirm we are on the right track - 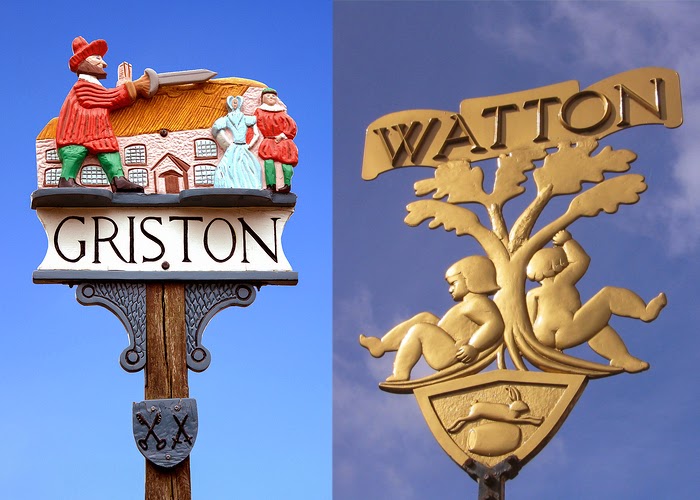 Indeed local lore does affirm that Norfolk is not only the source of the tale but claims it is a true story too. The sinister events unfolded in the mid 1500s while the de Grey family lived at Griston Hall. Thomas de Grey Snr. died in 1562 and left Griston Hall, its lands and a considerable inheritance to his son Thomas Jnr. who then was a mere seven years old. The boy was made a ward of Queen Elizabeth, and as was customary at in Tudor times, was arranged a marriage with another child Elizabeth Drury. However should young Thomas die, then his uncle Robert de Grey could claim the inheritance and lands. However there was no great love between Robert and the lad, and records show there had been some argument between Thomas Snr. and Robert over the will. Four years later in 1566, young Thomas was sent away to visit his step mother Temperance Carewe (his late father's second wife) and while there, or while en route, the lad died and Robert claimed the lands and monies.

Now Robert de Grey was not well liked to begin with as he was a Catholic and his corner of Norfolk was predominately Protestant. And so soon rumours began to circulate that he was responsible for the boy's death, and that the boy had been done away with while travelling through Wayland Wood. Robert provoked further ill feeling and strengthened the credibility of the allegations by attempt to seize the dower funds (that is the assets and monies agreed to be provisioned for a bride should her husband die before her) promised to Elizabeth Drury. The Drurys did not take this lying down and the matter was taken to court with a lengthy legal battle ensuing, which ended with Robert having to return some of the seized lands and assets.

For the rest of his life, Robert was in trouble with the law: later he would be fined and imprisoned in both Norwich and London for recusancy (the failure to attend Anglican services) and is said to have died disgraced and bankrupt. Furthermore there is another link to the original ballad - Reverend Thomas Kent in his The Land of Babes in the Woods (1910) reveals there was an expedition to Portugal organised by a Thomas Cavendish of  Suffolk in 1588, which he speculates that Robert's sons had joined and did not return from. The Reverend Kent also postulates that the inclusion of the robins burying the children may well be a poetic allusion to Robert - the uncle who was robbing his nephew and covering up the evidence. 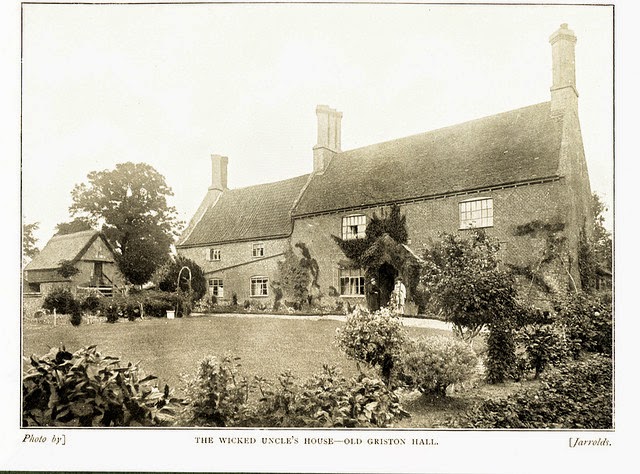 Having lost the lands and fortune, Griston Hall passed into new ownership and was extensively rebuilt in 1597. A new wing was added and local lore holds that rooms in that new extension were named "The Babes", "The Wicked Uncle" and "Robin Redbreast". Furthermore it said that there were carved mantle pieces which showed scenes from the ballad, even including the robins - sadly however they were removed around a hundred years ago and have since vanished.

The story is certainly well embedding in the local culture, with the deeds of the ballad finding their way into the signs of the nearby villages, and Old Griston Hall was locally known for many years as 'the Wicked Uncle's House'. Furthermore in Wayland Wood, there was a huge ancient oak tree which was said to be where the babes met their tragic end. And such was the popularity of the ballad, this venerable tree apparently was a popular place to visit, something of a tourist attraction, until it was destroyed by a bolt of lightning in 1879.

But local legend goes further, for it is said that Wayland Wood is haunted. Ghostly children have been seen flitting between the ancient trees, and there have been so many reports of folk hearing spectral sounds of infants crying and sobbing that locally it is called "Wailing Wood". Indeed some have said that is how the wood gained its name. But sadly, as appealing as this is, this tract of forest is documented in the Domesday Book in 1086 as Wane-lone, and so the similarity between 'wailing' and 'Wayland' is purely coincidental.

However all this talk of a wicked uncle, wailing in woods, and the ghosts of a boy and girl, cannot help but put me in mind of a certain tale by MR James, namely Lost Hearts (1895). This famous ghost story features all of these elements, albeit in a different shaped tale, but one we must note occurring in the neighboring county of Lincolnshire. And indeed Dr James was familiar with the Norfolk legends, for in his guidebook Suffolk and Norfolk (1930) he notes -

Watton is undistinguished except that near it the deaths of the
Babes in the Wood is located, in Wayland or Wailing Wood

And while the stories of the ghostly babes may have influenced Lost Hearts, Jamesian scholars also speculate that the local nickname for Wayland Wood may have inspired the haunted location and title of another tale - Wailing Well written in 1927.

So then, with rich associations with robins, pantomimes, ghost stories and MR James, the tale of Babes in the Woods, despite being based on a possible case of murder most foul, could be said to contain most of the quintessential elements of the traditional British Christmas! 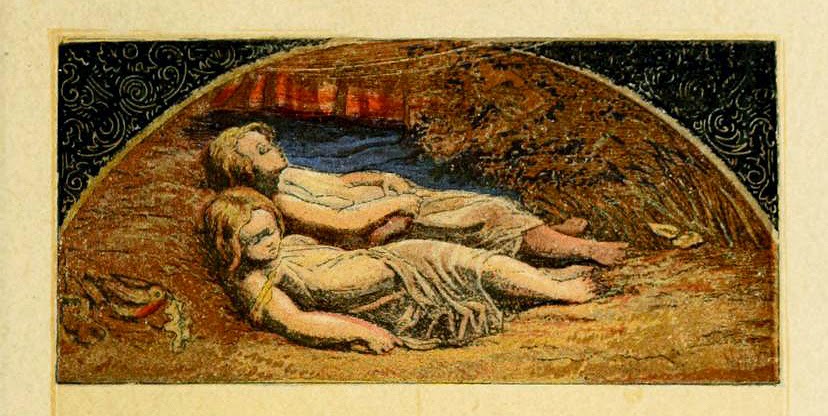