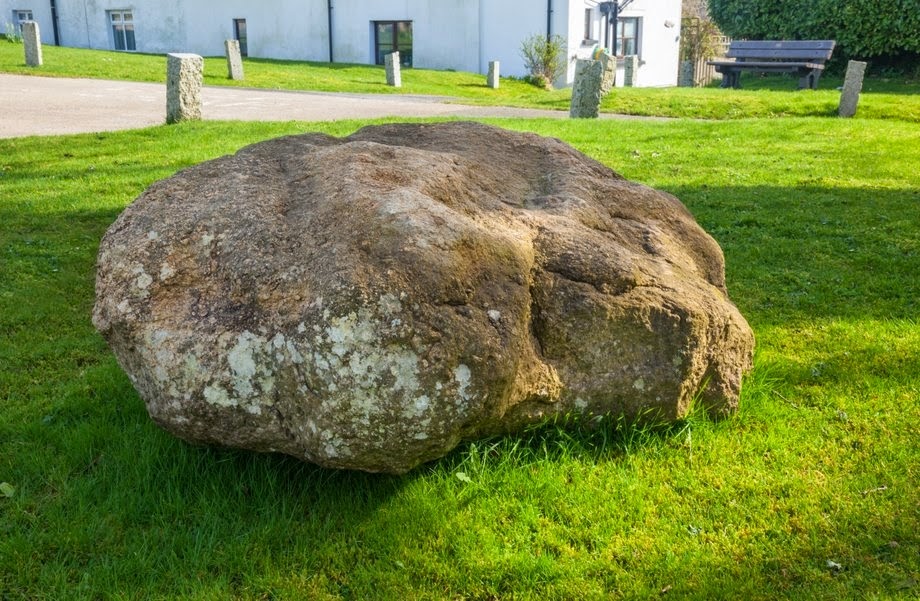 Remember, remember the 5th of November... Yes, in the United Kingdom the first week in the eleventh month sees countrywide celebrations involving firework displays and bonfires. Variously known as Firework Night or Bonfire Night or Guy Fawkes Night supposedly commemorates the foiling of a plot to blow up Parliament in 1605. Now I say 'supposedly' for two very good reasons: firstly that old Guido Fawkes has over the years become a bit of a folk hero and is widely, and these days only slightly comically, dubbed "the last man to enter Parliament with honest intentions". And secondly there's good reason to assume that the British custom of having great bonfire parties at the start of November is linked to older celebrations originally held at Halloween.

Now the links between Halloween and Firework Night customs are very hotly debated, with many serious historians insisting it is a British tradition born of political events in the early 17th century. However given that there is historically proven traditions of lighting bonfires on Halloween, this view would seem to be somewhat myopic. The tradition parkin - a form of cake - baked and eaten for Bonfire Night would seem to be highly suspiciously close to the earlier traditions of cooking soul cakes at Hallowmas. And furthermore while today we make effigies of Guy Fawkes to burn on the bonfire, in the early days of the celebration revellers actually dressed up as Guido Fawkes and went around soliciting "pennies for the Guys" with a threat of mischief if pennies weren't to be had -  a practice clearly derived from going Hallowmas mumming and going a-souling, the roots of our tradition of trick or treating.

More tellingly however, there are some curious folk customs occurring on November 5th that seem to address the supernatural world growing close to us, something more suited to Halloween, and indeed there are some that have nothing to do with fireworks or bonfires. One such tradition, which may well have had its date moved from October 31st to November 5th, occurs every year in a little village in North Devon. 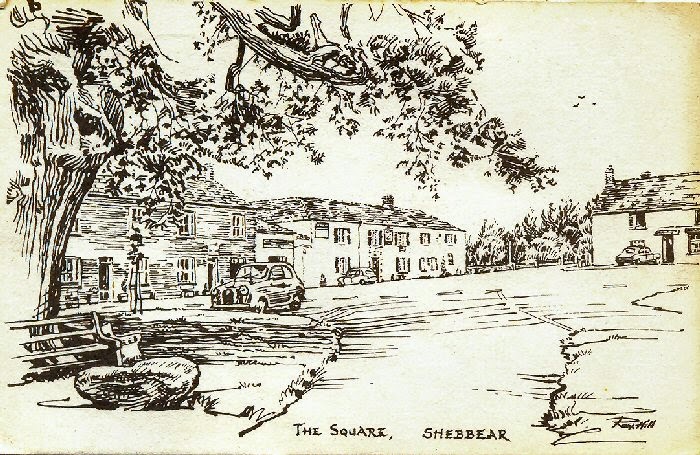 Shebbear is a small rural community of under one thousands souls but an ancient one. It is mentioned in that great survey of England carried out by William the Conqueror in 1086, the Domesday Book and the village boasts a very beautiful medieval church, St Michael Parish Church, built in 1358. Nearby this venerable place of worship, by an ancient oak tree, is a large stone locally called The Devil's Stone.

Quite how the stone got there nobody knows. Geologists have ascertained that it is not composed of the rock and stone, hence some experts have theorized that it is what is called a glacial erratic, that is a stone pushed from its native place by the growth of glaciers in the Ice Age and deposited miles away. Others have wondered whether this stone was deliberately brought to the area for ritual purposes like the altar stones of Stonehenge. Whatever the truth, the villagers have evidently long recognised the stone was not of local origin and there are several legends accounting for its origins.

Firstly some say the great boulder was dropped by the Devil, while fighting with St. Michael when the Dark One staged his rebellion in Heaven. Another states that the Devil so opposed the building of the church that he threw a great stone at it and missed. A further tale says that the mystery rock was to be the foundation of a church at Henscott but the wily Devil kept on rolling the stone away to Shebbear, and as I can find no trace any church there, it looks like Old Nick won that time. 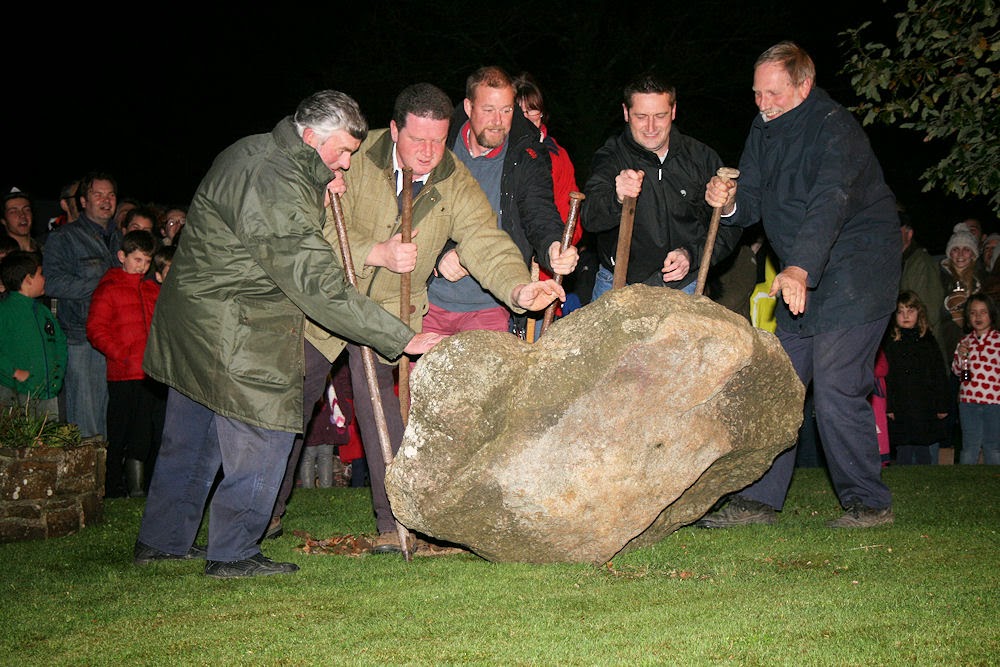 However the most interesting legend also gives us a curious rite carried out every 5th of November. It is said that the Devil is actually trapped beneath the stone itself. Hence on the night of November 5th, the strong folk of the village process to the stone with spades and pickaxes, and while the six bells of St Michael's are vigorous rang to ward off evil spirits, the great stone, which weighs around one tonne, is lifted and turned over by the locals to keep Old Nick imprisoned for another year.

And does this actually work? Well, in 1913 the villagers neglected their ancient duty and a string of misfortunes befell the village, and only ceased when the stone was turned. Furthermore in 1940, when all the brave menfolk of the village had been called away to fight, the stone was not turned. However as the news from the front turned increasing grim, the stone was at last turned that year and from then on, the ritual has been always carried out without fail... 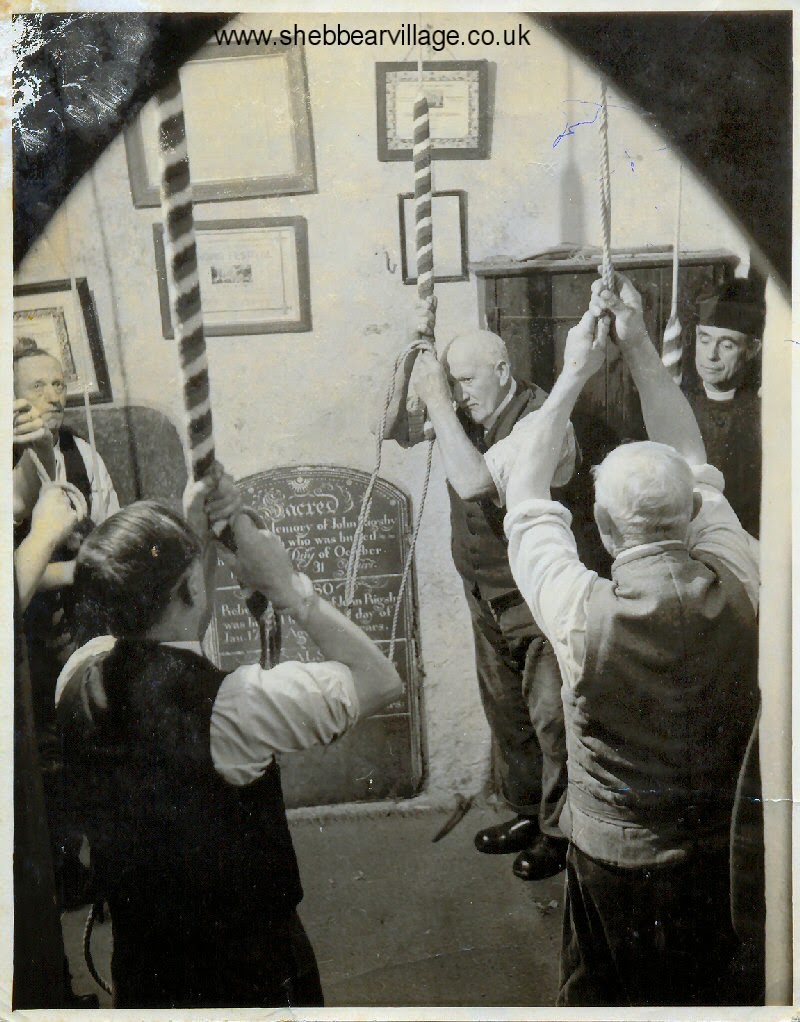