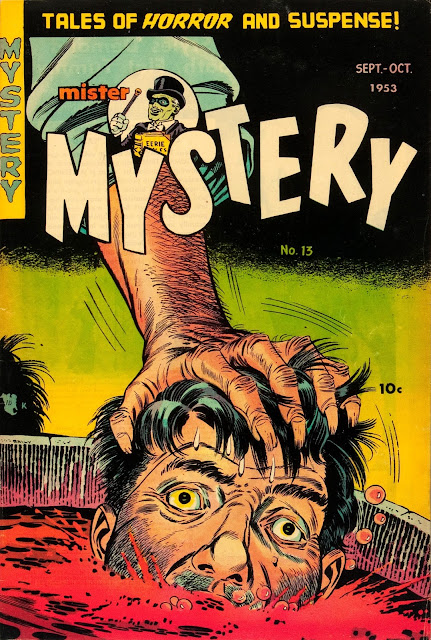 Many moons ago, in my dim and distant schooldays, a classmate had a rather splendid collection of horror comics donated to him by a wayward uncle. Naturally he was soon very popular, with kids clamouring to borrow assorted titles from his newly found hoard of horrors, and of course I was one of them! Now I read many great comics from that treasure trove of terror but one particular series really grabbed my attention - being extremely nasty, atmospheric and gory. Two tales in particular stuck in my mind one in which a mother revealed in spectacular fashion to her daughter the correct way to a man's heart, and another about three horrible old gossips who are punished for their wicked ways in a horrific but darkly ironic fashion.

However over the years, while the memory of those tales and their graphic black and white imagery burned brightly in my mind, I did forget the actual title of the comics in which they appeared - well in fairness, I was reading a whole hosts of horror comics at the time, most of which had exceeding similar sounding titles featuring the words 'weird', 'terror', 'fear' 'horror' etc. In more recent years, every now and then I would take the internet and run searches on the titles I did remember to try track down those tales - but alas to no avail!

Now recently over on the Hypnogoria Facebook page, I started a new gallery which recounts the history of horror comics. And while researching the assorted entries, I discovered a marvelous site Comic Book Plus - a vast archive of old comics, to either read online or download, for FREE and completely LEGALLY as these works have lapsed out of copyright. So then, unsurprisingly over the last few weeks I've been happily exploring their archives and enjoying the delights of pre-Comic Code horror comics. 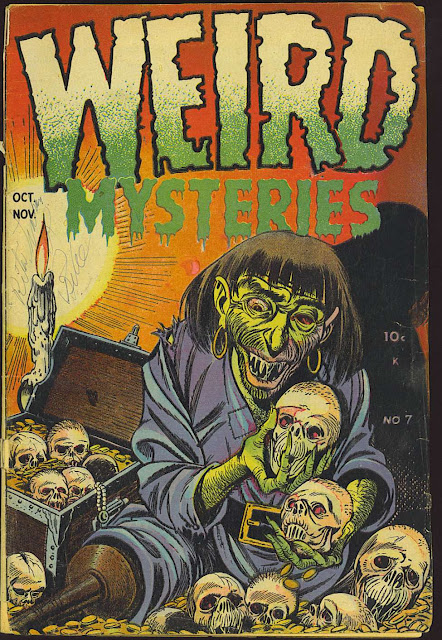 Now there's tons of great stuff there, including an archive of titles from Key Publications who were often said to have produced some of the nastiest pre-Code horrors, often out-doing the notorious leaders in the field EC, creators of the infamous Tales from the Crypt, the Vault of Horror and Haunt of Fear.  Key had several horror titles such as Weird Chills and Weird Tales of the Future. But it was their other titles -Mister Mystery and Weird Mysteries - that filled me delight, for I instantly recognized the hosts as the mysterious figures who had introduced those two most memorable tales from my youth!

The tale of the macabre mom turned out to be 'Mother's Advice' in Weird Mysteries #7 (which you can read here). The tale of horrid old gossips proved to be more elusive, but further digging revealed it to be a tale in Mister Mystery #13. And this excellent blog not only identified the mag in which I read them - a reprint title from the end of the '70s called Ghoul Tales -  but also reprints both strips in the black and white format I first saw them in! 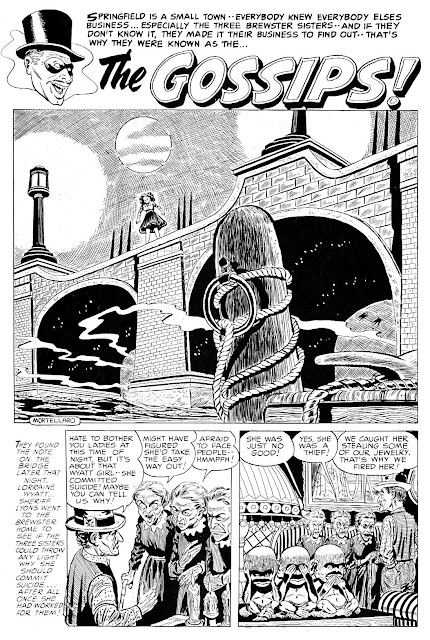