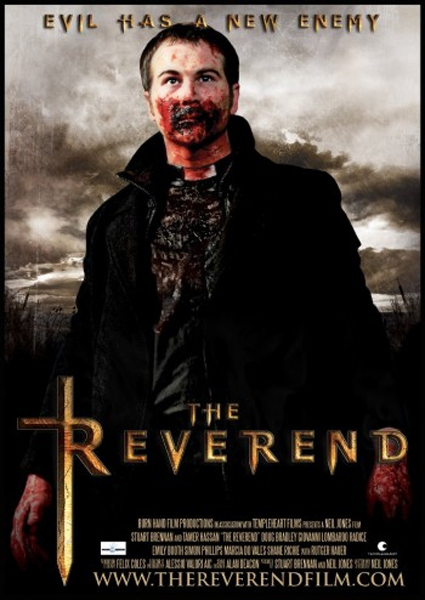 HYPNOBOBS 87 - How To Get Ahead In Ghost Hunting Part II 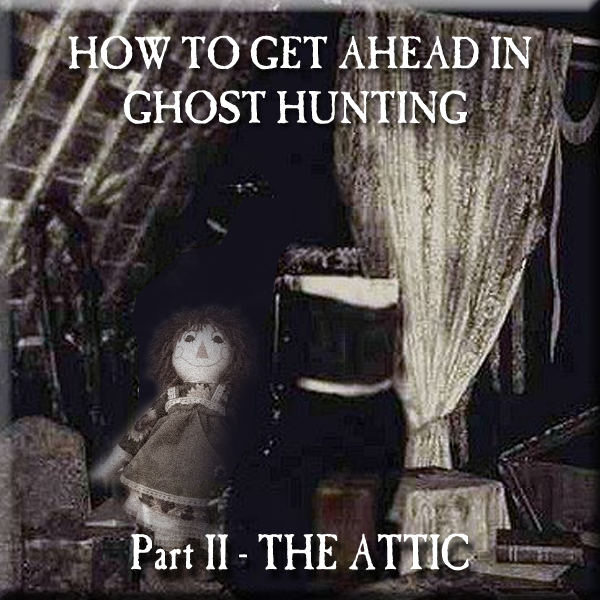 This week we once again turn the floor over to Mr Gary 'Horsehead' Stead for another chapter of his memoirs - How To Get Ahead In Ghost Hunting! In this second part, entitled The Attic chills are guaranteed! And afterwards Mr Jim Moon talks a little on the subject on EVP and foolishly tries out a live experiment...


DIRECT DOWNLOAD - How To Get Ahead In Ghost Hunting Part II

THE NATURAL HISTORY OF THE BATMAN

With a fresh wave of Bat-mania sweeping the world, it's time to shameless surf the zeitgeist! And so, we proudly present Mr Jim Moon's celebrated series of podcasts exploring the Natural History of the Batman where you can discover when Bruce Wayne first donned the cowl, how his famous foes emerged, and how the character has evolved through the decades of fighting crime in Gotham City! 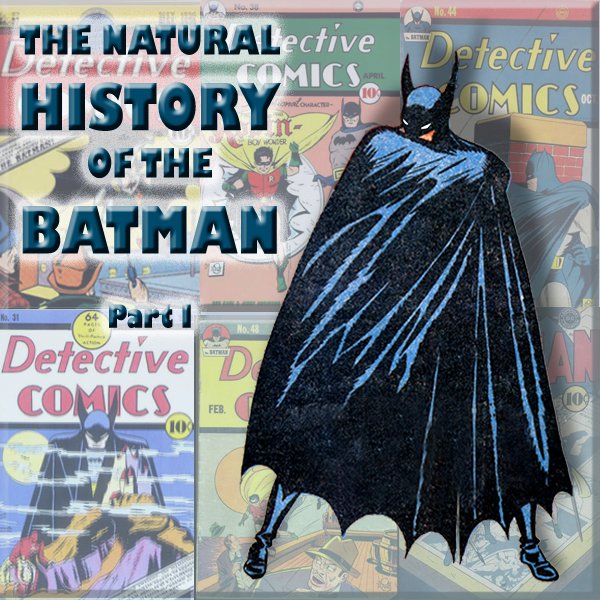 In the opening chapter of what has turned out to be an epic podcast series, Mr Jim Moon reveals the origins of the Batman and the genesis of the comic book medium! 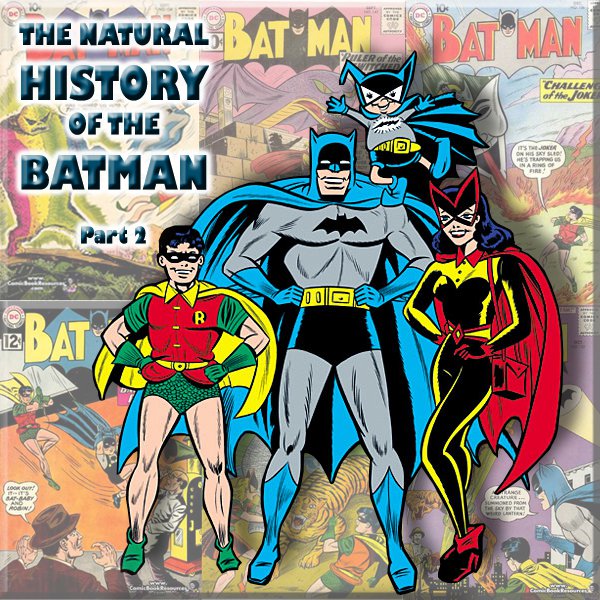 Continuing our exploration of Bat-history, we discover Batman gaining a family, follow them into the high weirdness of the Silver Age, and discover just who that little shit on the Dark Knight's shoulder is! 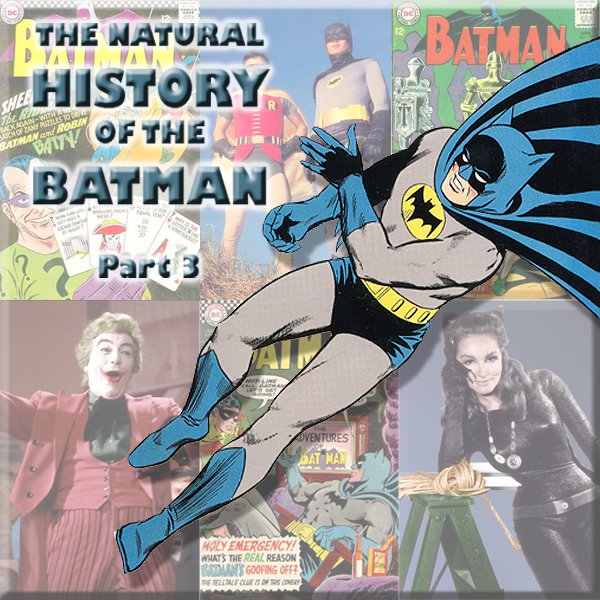 We swing into the 1960s with Batman, further exploring his evolution in the Silver Age and examining the iconic television series which unleashed a wave of bat-mania! 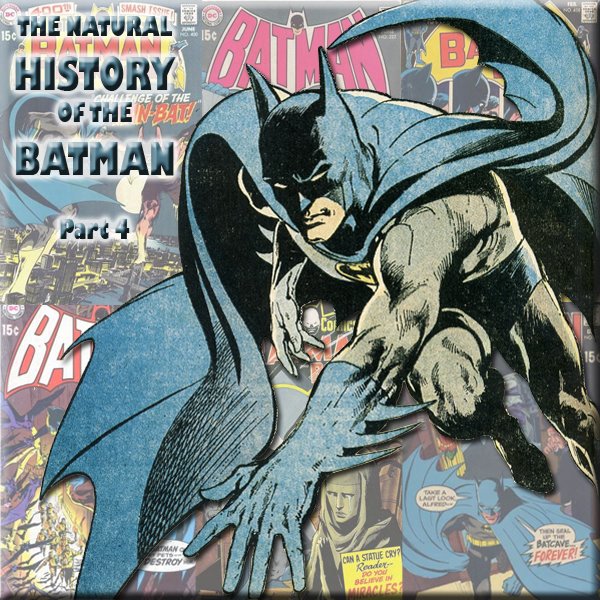 In this chapter of Bat-history we wade through the aftermath of Bat-mania, and see how comics legends Denny O'Neil and Neal Adams redefined Batman for the times that were a-changin' !

DIRECT DOWNLOAD - The Natural History of the Batman Part 4 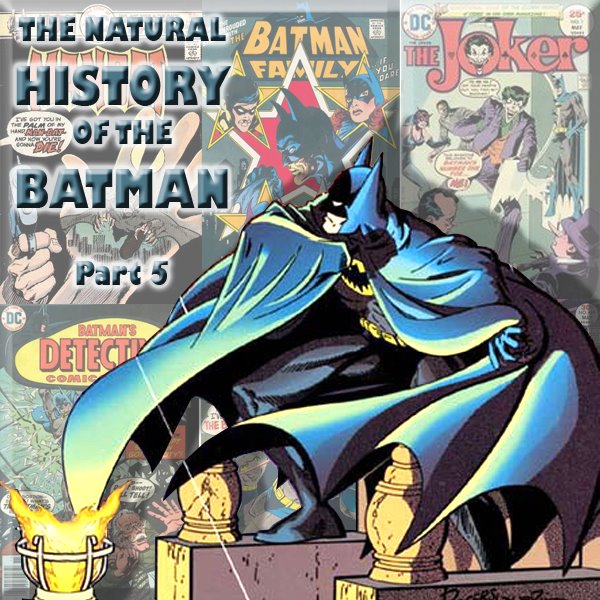 Troubling times for the Batman! We see how the Dark Knight fared against the sinister forces of a new villain - the flood of rival comics unleashed by the mighty Marvel!

DIRECT DOWNLOAD - The Natural History of the Batman Part 5 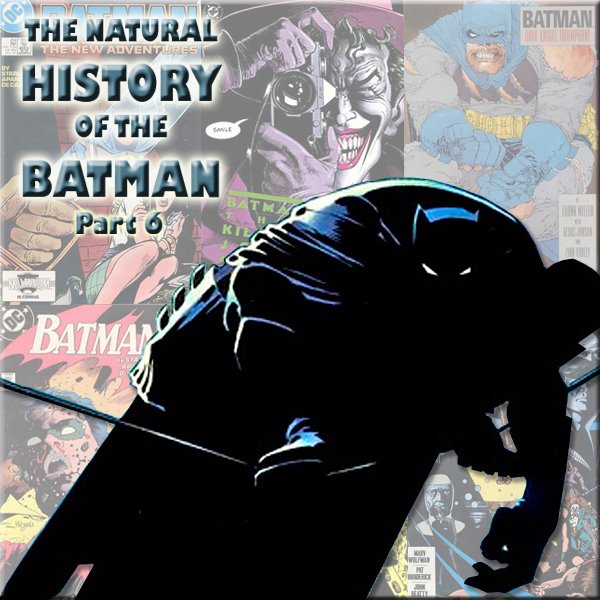 It's Batman in the '80s! A truly titanic decade of evolution for Bat-comics, with a Crisis on Infinite Earths,  Frank Miller and Alan Moore taking the character in new darker directions, and a redefined origin win Years One to Three!

DIRECT DOWNLOAD - The Natural History of the Batman Part 6

COMING SOON - The Natural History of the Batman Part 7 - examining Batman in the '90s and the quartet of big screen adventures that swept the world in this decade! 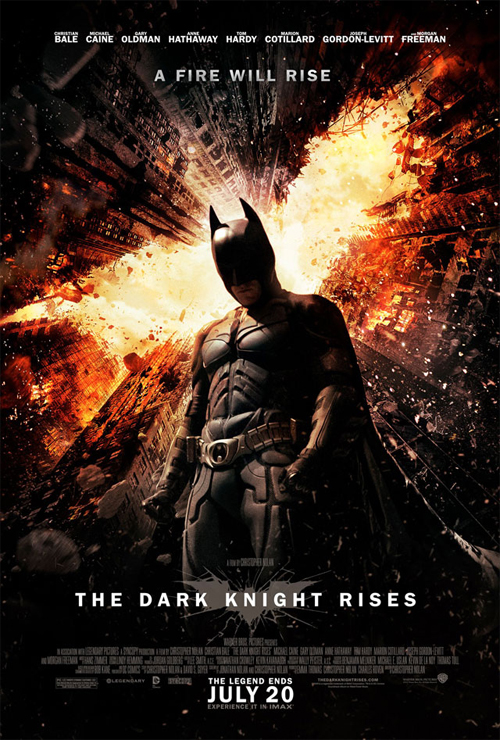 Spoilers will most definitely not rise!

Well the third and final Batman movie from Christopher Nolan has finally hit the screens, and your humble scribe was swiftly dispatched to the local multiplex to catch the earliest possible screening. Well not quite the earliest as cinemas up and down the UK were starting to the show the flick from 5 AM onward, and while it is true that I am a huge Bat- fan AND a notorious insomniac, staying up all night to attend a before-the-crack-of-dawn performance didn't seem the ideal conditions to fully appreciate Mr Nolan's opus.

Now then for an idiosyncratic reviewer like myself The Dark Knight Rises presents something of a problem,  namely that every man and his bat are posting up reviews left, right and centre. And so, rather than the usual sandwich of paragraphs and pictures of Anne Hathaway, I thought I just attempt answer a few question you might have about the movie before going in...

WILL I BE ABLE TO UNDERSTAND A RUDDY WORD TOM HARDY'S BANE SAYS?
From the assorted trailers and teasers, the sound filters applied to Mr Hardy's dialogue have emerged as the primary concern for a lot of prospective audience members. Now as I was wary of seeing too much of the movie before the release I largely avoided all this hoopla so I can't really comment on the differences between the style of speech used in promos and the finished article.

However what I most definitely tell you is that bar a couple of brief snatches of dialogue Mr Hardy is perfectly intelligible. Or course whether you like the vocal stylings or not is another matter... Now I thought it actually worked rather well, capturing the hyper-intelligence and malice of the Bane of the comics and sounding rather excellent in my cinema's surround system. And I suspect the quality of the speakers in your auditorium will be a factor here. Indeed despite the difference in costume and the tweaks to his backstory that will annoy comics purists no doubt, Hardy makes an excellent Bane, turning in a powerful performance not hindered in the slightest by the fact most of his face is encased in a gasmask.

However I must confess, it did take me a while to get this description from Mr Lee Medcalf of The Black Dog Podcast out of my head... 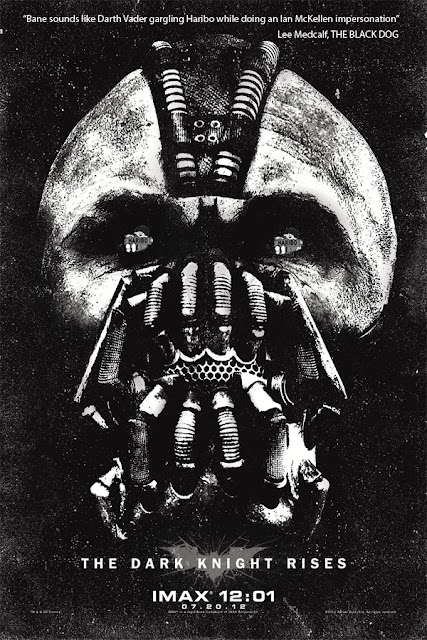 WILL I BE ABLE TO UNDERSTAND CHRISTIAN BALE'S BATMAN FOR THAT MATTER?
Now on the subject of Bale's Bat-voice, I thought it was fine Batman Begins but it did edge into gargling with gravel territory in The Dark Knight. However you'll be pleased to learn that in this feature, he's dialed it down again and only once, very briefly, did I flash on this...

HOW IS ANNE HATHAWAY AS CATWOMAN?
One word - superb! Nolan's take on the character is rather brilliant - much like his Batman, the Catwoman on here is believable version of the character that inhabits a realistically gritty crime noir. However she's also very close to the modern comics version of this iconic feline villain, indeed closer to the source material that Nolan's Batman in many respects.

Anne Hathaway herself is wonderful in the role, making the character smart, strong, sexy and funny. There's no campy purr-fect kitty katting about here, instead we have the morally ambiguous master thief of the comics, complete with  sensitively beneath the fine-honed street skills and her own sense of honour. Yes, I've got a new favorite screen Catwoman...

And yes, she looks ruddy fantastic in that catsuit, just don't do a Fred Willard... 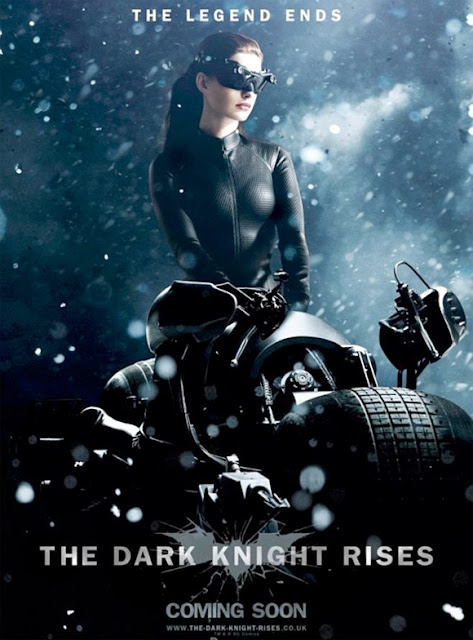 IS THIS A THREEQUEL OR IS IT ACTUALLY THE FINAL PART OF A TRILOGY?
Now given the rather dire nature of many recent third entries in blockbuster franchises of late, I must confess to being slightly worried if the curse of the threequel would strike again. After all even the great Sam Raimi stumbled badly with Spiderman 3 (although in fairness, various cinematic coroners have concluded that he was pushed), so would Nolan make a similar fumble suffering from third film fatigue?

Well no, for The Dark Knight Rises is not a second sequel but the closing chapter of a three act story. And while all the movies can stand alone on their own two feet, they do dovetail together to make one brilliant Batman story arc. And hence I strongly recommend you watch the first two movies again before going in! 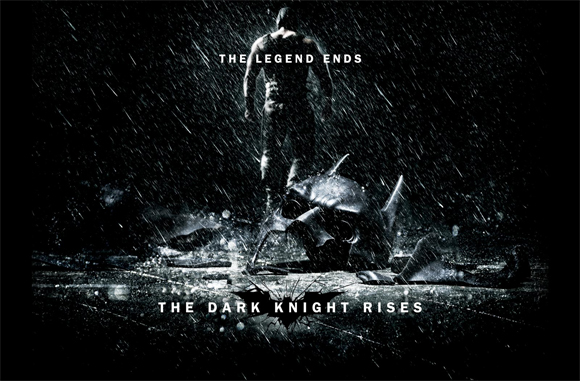 IS IT AS GOOD AS THE AVENGERS
Well, that might be a logical question - hey they are both superhero movies right - but it's like comparing eggs and bacon. Yes, they both happily live side by side on a breakfast plate but they aren't the same type of things. The Avengers is a movie about folks with super powers and scifi technology knocking seven bells out of aliens and each other, whereas The Dark Knight Rises, like Nolan's preceding brace of Bat-movies, is a crime drama featuring masked vigilantes. Yes, they are both comic-book films but they are different genres, so any comparison is built on shifting sands.

So are eggs better than bacon? No...

Is bacon mightier than the egg? No...

But I'll tell you what - I'm very glad to have them both on my blockbuster plate this year!


BREAKFAST METAPHORS ARE ALL VERY WELL SMART-ARSE BUT IS IT ANY GOOD?
I think it's safe to say that if you enjoyed the gritty and intelligent take on Batman presented in the previous two movies in this series, you'll find The Dark Knight Rises delivers more of the same. And what's more delivering a rousing finale to Nolan's three picture saga.

Or course, by the same token if you have problems with the other two, it's unlikely this closing chapter will change your opinions on the Nolan Batman. However that said, this series has turned out to be a bona fide trilogy and problems some have had with the first two movies are ironed out retrospectively to a degree when you view it as a complete whole - for example, the slow pace and low key nature of Batman Begins makes more sense as world building and set-up. Indeed the real triumph of The Dark Knight Rises is that it is a powerful conclusion to the series and enhances the earlier movies when you see how Nolan's story threads and themes come to fruition, rather than tarnishing and diminishing the earlier films as so many other threequels have.

Of course that does leave us with one final question - which of the trilogy is the best? And that particular question, I'll leave for you to debate at your leisure... 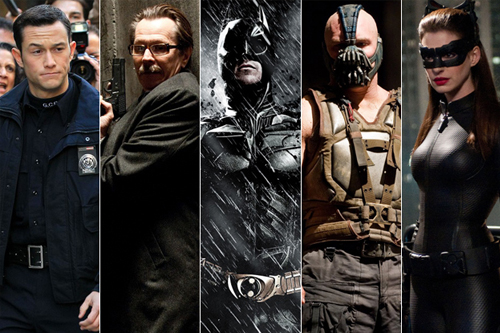 HYPNOBOBS 86 - Children of the Wolf Man 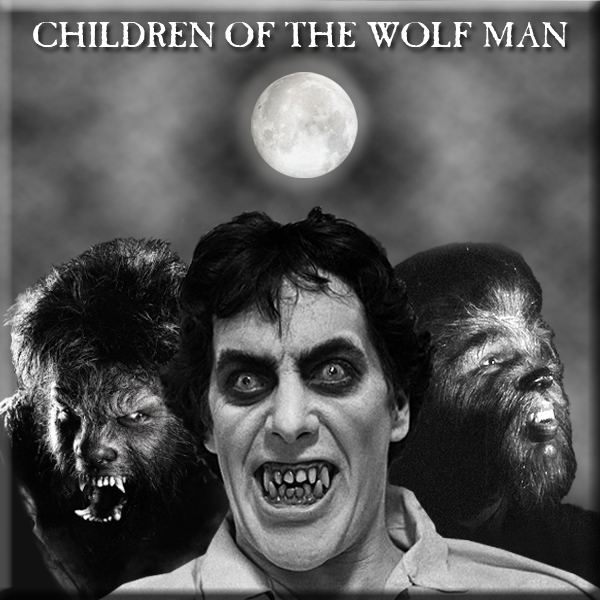 Concluding our history of werewolvery, Mr Jim Moon tracks the progeny of the Universal Wolf Man, tracing the influence of Mr Larry Talbot on lycanthropic cinema. Under the light of the silvery moon, we hunt down The Mad Monster, The Undying Monster and The Wolves of Malveneur, hear the Cry of the Werewolf and witness the Return of the Vampire, before uncovering his descendants are alive and well in the modern age in the shape of An American Werewolf in London and The Wolf Man remake. 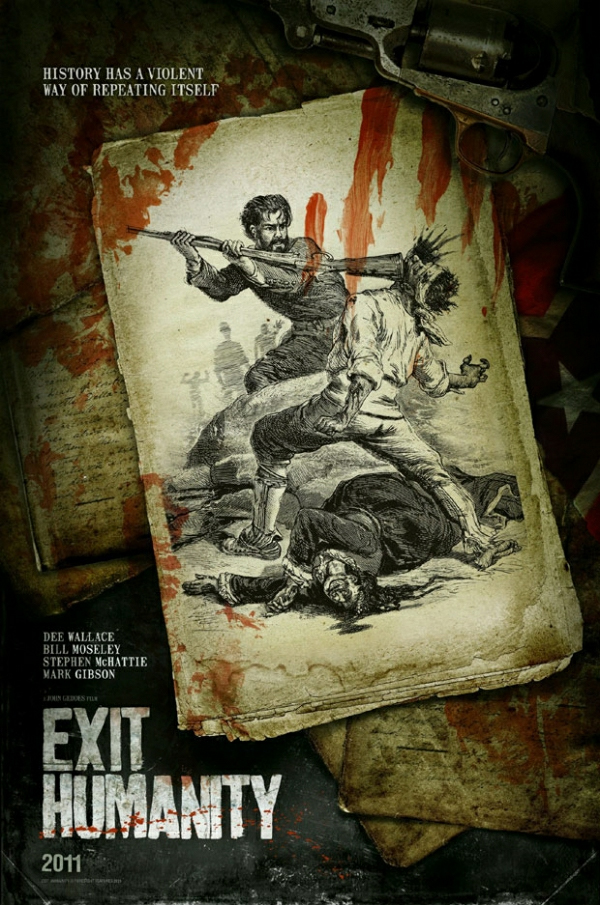 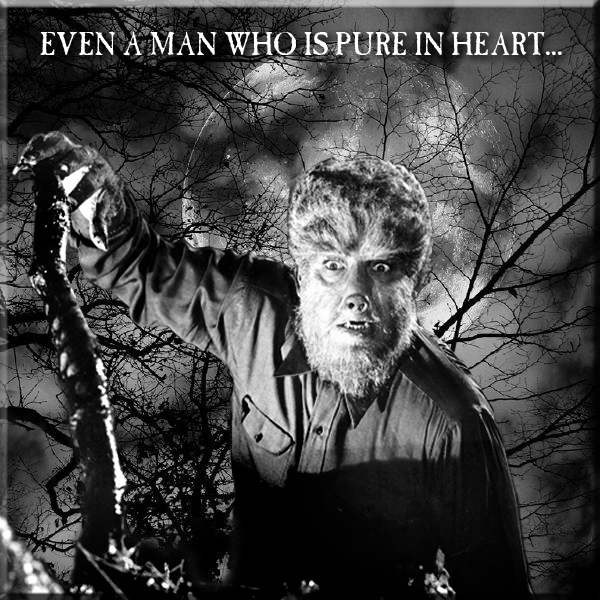 Even a man who is pure in heart
And says his prayers by night,
May become a wolf when the wolfbane blooms
And the autumn moon is bright

Continuing what is turning into Werewolf Month here in the Great Library of Dreams, Mr Jim Moon rambles at great length about the 1941 Universal classic The Wolf Man starring Lon Chaney Jnr. Along the way we learn about the history of the Universal Monsters and just where the werewolf's vulnerability to silver actually comes from...


DIRECT DOWNLOAD - Even A Man Who Is Pure In Heart... 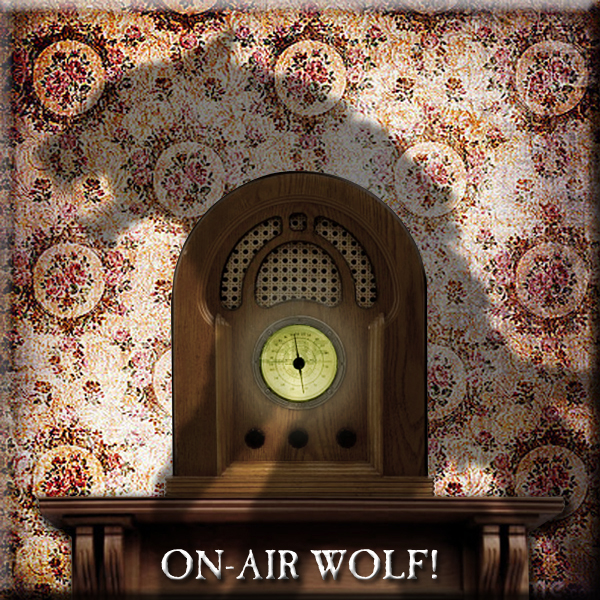 This week Mr Jim Moon delving into the audio archives of the Great Library of Dreams to bring you two contrasting werewolf tales from the eerie world of old time radio! First we have The Werewolf from The Weird Circle, a radio play based upon The White Wolf of the Hartz Mountains by Captain Frederick Marryat, and then W Is For Werewolf from Dark Fantasy.