THE ADVENTURES OF TINTIN - SECRET OF THE UNICORN 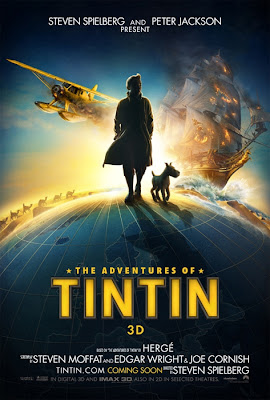 Blistering barnacles! There be no spoilers here laddie!


During the 1990s, the phrase 'graphic novel' became all the rage, describing an exciting new development in the world of comics, namely collecting issues together into 'proper' books and gracing the shelves of respectable bookstores rather than backstreet shops with strange names like The Android's Dungeon. Comics had finally grown up, trumpeted the numerous newspaper and magazine articles which popularised this new term, who with typically shoddy reportage entirely missed the point that it was the stories and content of the likes of Alan Moore's Watchmen and Frank Miller's The Dark Knight Returns which had the comics world frothing at the mouth, not the fact that they were available in collected large format paperbacks in the high street.

For comics being collected into 'proper' books was, as any comics fan knows, not a new thing at all. 'Graphic novel' was merely an update on an older term 'graphic album', and for many European comics fans there first introduction into the four colour world were book collecting the adventures of two Continental titans of the medium, the hilarious exploits of Asterix the Gaul and the globe trotting investigations of young reporter Tintin!

Indeed back in my own school days, volumes featuring these two heroes were frequently fought over in the school library, with many and argument over who rightfully should have them next; I remember waiting for what seemed like an eternity to get my hands on Destination Moon and it's sequel Explorers on the Moon, which as they featured space travel had the highest caché among my peers. We thrilled to his adventures across the world, laughed at the bumbling of his supporting cast and avidly watched the cartoon series Hergé's Adventures of Tintin which was a regular staple of school holiday TV back then.


Of course as we grew older we discovered the exciting  super-heroics  of Marvel and DC, and the gritty violence of '70s UK comics like Action, Battle and 2000 AD, and Tintin was left behind. But as the boy reporter and his dog have always seen as a good deal more respectable than the likes of Batman and Judge Dredd, generations of European children first discover comics through  finding his books in school libraries.

Of course in the US, where they have legions of home grown heroes and because during the '50s comics were seen as a cause of teenage delinquency, Tintin remains something of an unknown quantity. Which is why it has taken Hollywood so long to bring our bequiffed hero to the big screen at last. And it's telling that it took the clout of not one but two giants of cinema, the forces of Steven Spielberg and Peter Jackson combined, to make this movie happen.

Now not so long ago having these two names heading the production would have guaranteed geek bliss before a single still had been released. However after the somewhat muted reaction to Jackson's King Kong remake and the complete travesty of a fourth Indy outing, it's fair to say there were more than a few doubts hanging over the project. Although Hergé himself had named Spielberg as his personal preference for a director to bring his creations to the silver screen, he was talking about the young fellow who had given the world Raiders of the Lost Ark, not the beardy buffoon who had removed the guns from ET and cursed us all with Crystal Skull.

So given Mr Spielberg's *ahem* spotty recent record, would we see Tintin similarly bastardised? Would the boy reporter still have his firearms? Would Captain Haddock still be rolling about drunk? But thankfully, there were other notable names onboard to handle the screenplay; Steven Moffat, show runner of Doctor Who and Sherlock, Edgar Wright, director of Shaun of the Dead, Hot Fuzz and Scott Pilgrim vs The World, and Joe Cornish, who recently gave us Attack The Block. And you'll be pleased to hear that this trio has managed to stop Spielberg welding any silly bloody aliens into the plot.

Now 'return to form' is a much abused phrase, often wheeled out with the minimum of credit. However in this case it is very well warranted, for The Adventures of Tintin is simply glorious cinema. Now with Spielberg, you always get a high level of production value, but over the years his films have been marred be either too much saccharine and sentiment or weighed down with 'hey I'm a serious film-maker' earnestness. However with a solid script from the afore mentioned three gentlemen, that draws heavily from several Tintin books, to keep the project true to the tone and feel of the original, we are spared either of poles of his directorial excesses. It's proof that that films from even the most gifted directors are as only as strong as their scripts.

And while there has been some inevitable carping in some quarters about the motion capture CG animation, I think this new medium has really come of age with this picture. The Adventures of Tintin looks gorgeous and the style which has a realistically rendered world populated by caricature figures mirrors perfectly the original comic art.  And the strength of the animation is matched by fine performances from the cast; Andy Serkis is outstanding as the blustering drunken Haddock, Daniel Craig is evidently having a ball moustache twirling, and there's good comic relief from Pegg and Frost as Thompson and Thomson.

Quite simply, The Adventures of Tintin is a superb adventure for all the family. There's plenty of action, wonderful characters and a lot of laughs all intelligently tied together with an old fashioned detective story that spans the globe. In many ways, it's everything the fourth Indy movie should have been, and rightly so as Tintin is one of the forebears of Dr Jones. Indeed, Spielberg delivers one particular action sequence that trumps everything is the last three Indiana Jones outings.

The movie's biggest triumph however is that is captures the magic of Tintin himself. Not only does Jamie Bell bring the boy reporter to life wonderfully, but the film makes his long lasting appeal clear - essentially Tintin is young enough for children to identify with his, and grown up enough never to need bailing out by adult figures (the bane of many other young investigators like the Hardy Boys). Now I must confess, and I know I'm not alone in this, that when I was originally reading Tintin I always much preferred his supporting cast. However in this screen adventure the character really shines, and in Bell's capable hands, Tintin is warmly likeable and solidly heroic.

And furthermore I really want to see him in action again soon! Indeed I hope that this film has all the box office success it deserves, so that we might revisit his vivid and exciting world again soon. And in the meantime I'm off to revisit the original graphic albums...