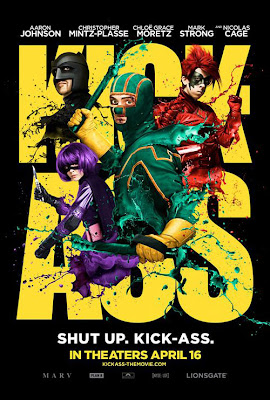 Right now, the world can be divided into those who know about Kick-Ass and those who do not. If you are one of the geek cognoscenti, you will already know the tale - not just of the comic book but its unusual development. But for everyone else, who doesn’t have a line into the world of comics, prepare to meet the hottest new heroes, who true to the name of their book, will kick your ass.

However, if you are one of those benighted souls who are unaware there’s recently been a civil war in America or completely oblivious of the various continuity warping crises - i.e. most ordinary movie goers – then step this way true believer!

Mark Millar is one of the biggest names in the world of comics, and is part of that pantheon of British writers, which includes Neil Gaiman, Warren Ellis, Garth Ennis and Grant Morrison, who have followed in the footsteps of the hallowed Alan Moore in producing truly ground breaking comics, reinventing old favourites and unleashing new creations in equal measure. A common feature of the work of these gentlemen is putting a new spin on the classic superhero tropes, bringing in a greater sense of reality to the usual four colour adventures and investing their costumed denizens with a deeper humanity.

Way back in the 1980s, in the pages of the seminal Warrior magazine. The young Moore made a big splash with the strip Miracleman– then called Marvelman until legal issues forced a name change – which took an old comics character, the British incarnation of Captain Marvel, and took the then radical approach of asking what would happen if he existed in a realer world than the ones normally depicted in comics. Moore explored such questions as how does one cope with super powers, maintaining a secret identity and how will the government and media react to the emergence of a superhero.

This new direction has proved to be very fertile ground, widening the scope of superhero stories considerably. It has opened up doors to psychodrama, social comment, political satire and post modern deconstructions and given us genre bending new titles like Watchmen, Preacher and The Authority and completely redefined failing characters like Swamp Thing, Animal Man and the Sandman.

And Kick-Ass is the latest descendent from Moore’s Miracleman and takes the next logical step. We have had heroes aplenty wrestling with deep and dark personality problems in stories reflecting contemporary social issues but Kick-Ass is a comic that is set in our world, and explores what would happen if you decided to don a costume and fight crime, powered up with just a love of comic books rather than the usual radioactive mutation or alien super-technology.

It's a fantastically clever concept and Millar’s tale has struck a real chord with comic lovers everywhere, with the first issue of Kick-Ass selling out almost instantly. Yes, there was a viral campaign to promote the book, but it must be noted that it is very rare for any comic to fly off the shelves so fast – usually it’s only when of the big names like Superman or Batman that reap such sales, and even then only when Marvel or DC have cooked up a really big story line killing off one of the leads, such as the Death of Superman story arc or the Joker murdering Robin (A Death in the Family).

For the first issue of a book featuring an all new character and not emblazoned the logo of a big name publisher to sell so fast is truly remarkable. But reading the book – the first eight issues are now collected in graphic novel - you can understand why. Kick-Ass is intelligent, violent and funny all at the same time; Millar’s writing is his sharpest date and envisioned beautifully by John Romita Jnr’s art. But the real key to its success is the story’s concept – after all, anyone who has ever enjoyed a superhero adventure or two has fantasised about donning a costume and fighting crime. Indeed the genesis of Kick-Ass is autobiographical: in an interview with Techland Millar reveals that in his youth he and a friend did plan on doing exactly what Dave Lizewski does – work out, design a costume and bring super heroics into the real world.

However Kick-Ass is also notable for more than taking the comics world by storm. A chance meeting brought Millar together with director Matthew Vaughan and the pair hit it off immediately. Vaughan, then just having wrapped up Stardust asked Millar if he had any properties he could direct and received then still unpublished scripts for the first two issues of Kick-Ass. And being a comics fan, Vaughan instantly began developing a movie with Millar and Romita.

Now what’s interesting here, is that the comic series and the film script were being written at the same time, with filming going ahead while the comics were still being created. Kick-ass The Movie is not so much an adaption of a comic series but a parallel version of the same story. All of which means we can dispense with all the usual nitpicking over differences in the texts, as the creators of the comic themselves plotted out how the story would mutate in it’s journey to the alternative earth of the movies. And with Millar and Romita shaping the screenplay with Vaughan, we can also totally ignore the frothing of rabid fanboys over how Hollywood has ‘ruined’ the comic.

And while there are some differences between the movie and the comic, including several major changes in the plotting, in the main the story retains the same essential shape. Without shining the Spoiler Signal into the night sky, the upshot of the differences between the two versions of Kick-Ass comes down to this - the comic version is a darker, spikier telling of the story, whereas the movie has a bigger heart and goes for bigger rather than bloodier action scenes.

Plus as they were developed in tandem, the question of which Kick-Ass you should experience first is a moot point - what we have hear is two cuts of the same story with their strengths weighed to their respective media.

Now I loved the comic, and I had high hopes for the movie. Matthew Vaughan had previously impressed me with his debut Layer Cake which managed to outshine his mentor Guy Ritchie in the British gangster stakes. And then rather than fall into the more of the same tar pit as the ex Mr Madonna, he did something completely different - a wonderful adaption of Neil Gaiman’s graphic and proper novel Stardust. And the screenwriter who had done such a brilliant job in adapting Gaiman for the screen, Jane Goldman was onboard to create the final script for Kick-Ass too.

So this was a movie with a great pedigree coming out of the gate – a hit hip comic adaption with the creators involved in the production, a director who has proved himself to be possessing great flair and very versatile, and a writer who understands how to translate comics to the screen successfully. But surprisingly, when they took the script around the studios they all passed on it and in the end, Vaughan raised the millions needed to make the picture himself. And having seen the movie, all I can say is that The Golden Jackass Club founded by Dick Rowe – the man who refused to sign the Beatles as guitar groups were “on the way out” - will see a record intake in its membership this spring. And when the box office figures land, there’ll be blood on the carpet quicker than you can say *snikt* and so many heads rolling you’ll think Madame Guillotine has gone in partnership with the Red Queen.

Because Kick-Ass does exactly what it says on the tin and audiences are going to lap this movie up like Garfield in a lasagne factory, which makes passing on this property a quadruple F situation – you fucking fuckers fucking well fucked up. Now Hollywood execs are famously hard of thinking, but not picking up Kick-Ass does take the biscuit as the comic sales alone should have tipped them off to the potential of the this movie. As we saw earlier, its success hinges on the fact that it’s a story the whole of the comic book reading world could relate to, but the power of Kick-Ass is that it’s a story anyone can relate to. Whether you’re male of female, we all grew up on stories of kids fighting crime – it might have been Scooby Doo, Nancy Drew, the Famous Five or any one of the countless variations on this theme - and doubtless at some point in your youth you took the streets looking to a villain to foil or a mystery to solve.

So if you take a superhero tale – a hot ticket in the world of cinema right now – that taps directed into this universal theme that is so prevalent in all forms of children’s fiction, and that has a script that balances its violence with humour, its emotional story with action scenes and slots the whole shebang into a framework that is essential a riff on that other great universal trope, the coming of age story, you’ve got gold.

The meshing of two creative teams, Millar/Romita and Vaughan/Goldman, in Kick-Ass is pure cinematic alchemy that delivers everything you want from a blockbuster – there’s action, adventure, romance and humour wrapped up in an intelligent and stylish package. Of course as good as the script and direction is in many ways a film is as only as strong as its cast, particular in a film with juvenile leads. And thankfully Kick-Ass has a terrific cast – Mark Strong is great fun as head hood Frank D'Amico and even Nicholas Cage puts in a superb performance that is a real return to form.

But the laurels must surely go to Aaron Johnson and Chloe Moretz who play Kick-Ass and Hit Girl. Johnson captures perfectly that screen rarity an ordinary teen – his Dave Lizewski
is pitched exactly right, inhabiting that hinterland between cool kid and nerd that most us fell into. This guy can act the entire cast of Twilight into a cocked hat even when all you can see of him are his eyes and lips. And Chloe Moretz is simply awesome – again without breaking the Sinister Spoiler Spectre from Arkham Asylum, the character of Hit Girl is where this film could have been completely scuppered; it’s a role that requires a very deft touch to pull off, calling for not only some very subtle dramatics but impeccable comic timing too. And Moretz knocks it out of the park.

In short Kick –Ass is more than just a great comic book flick; it’s simply a great movie full stop. It’s tremendous fun from start to finish, throwing shocks, thrills and laugh relentlessly at the audience. It’s a film with guts, brains and heart; a rare combination of elements you only usually see on screen on the floor in a Saw sequel. If you’ve read the comics then you’ll love seeing Millar and Romita brought to life, and there are some fantastic surprises when some of the changes kick in. And if you’ve not read the books, then you’ve got a terrific ride ahead of you! Really the only review you need is the film’s title itself…