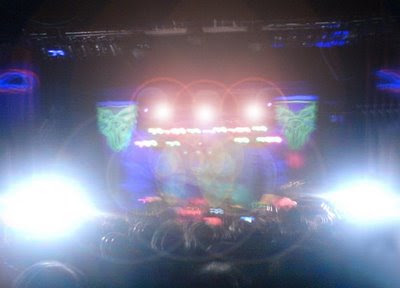 T'other Friday my good self and the infamous Roadhawk the Cosmic Knight went on a jolly to see the legendary space rockers Hawkwind in concert. For those of you who don't know, Hawkwind are one of the longest running psychedelic rock bands in existence who over the years have unleashed albun after album charting the depths of both inner and outer space. Since forming in the pre-Cambrian Period, Hawkwind have set loose Lemmy on an unsuspecting world, counted legendary author Michael Moorcock as one of their number and worked with personalities diverse as Arthur Brown, Samatha Fox and Matthew 'The Wright Stuff' Wright. They have inspired countless bands and fried innumerable brain cells. And the current line up features Tim Blake, aka Moonweed, from the equally legendary Gong, on keyboards and theremin.


Now I've seen Hawkwind several times in the past (to be honest I'm not sure how many times exactly - I've killed alot of brain cells over the years), and Roadhawk always visits this plane of existence when they play, so we pretty much knew what to expect. Pyschedelic light show - check. Backdrop projecting cosmic imagery - check. Mime artists - check. Dave Brock looking pretty chipper despte being at least several aeons old - check. However this gig wasn't just business as usual as the 'Wind delivered the best set I've ever seen them do.


Opening with a blistering extended version of 'Masters of the Universe', and then blasting out a fantastic tour through their discography, Captain Brock and co were on tip top form. The current five-piece line up really allows them to play spectacular versions of most famous tunes, building full-on swirling walls of noise shot through with spiralling melodies. This performance not only underscored how epic Hawkwind are in their music, but also how marvellously anthemic so many of their compositions are. Old favourites like 'Damnation Alley' and 'Assualt and Battery' had the crowd joyfully singing along, and the final song of the two hour set "Silver Machine" really blew the roof off.


The guys are really on top form at the moment and if you've seen before, then catch them again now! And if you are new to Hawkwind but love pyschedelia and storming guitars, then I heartily urge you to grab some of their records and rush out and see them now. Ok they have been going a long long time but this is not some dinosaur band - oh no, Hawkwind are DRAGONS!


Hypnogoria now has a Facebook group! You can find it here -

Come on over and have a gander!

At last - The House of Frankenstein 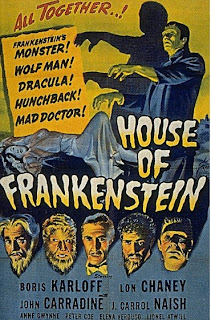 Finally it's here! Bet you all thought I'd forgotten! Well at last it's here, my little review of the 5th installment of Universal's Frankenstein saga...


Now in an episode of the marvellous Horror Etc podcast, one of the the hosts, the very genial Anthony DP Mann claimed that in his opinion Universal never made a truly bad horror film in this era. And while I wholehearted concur with this, it has to be said that House of Frankenstein is easily the weakest entry in the saga.


In the trailer for this monster rally, Universal promised audiences a whopping five monsters in one flick! Obviously raising the stakes from two to three monsters just wasn't good enough! So here we have the tale of Dr Niemann (Monster #1 - The Mad Scientist) and his quest to continue his experiments and extract revenge on those who have crossed him. Niemann, played with relish by Boris Karloff, is perhaps best described as a Frankenstein wannabe - he even emulates his hero right down to having a deformed assistant (Monster #2 - The Hunchback). And in the course of the movie, he revives not only the Frankenstein monster and the Wolf Man, but Dracula too (Monsters # 3, 4 & 5 natch).


Now that's a whole lotta monsters! Now considering the patchy pairing of Frankenstein Meets The Wolf Man, it's no real surprise that the script has trouble fitting all these villains into one movie. But in the main, surprisingly, they do manage it! No mean feat, when you consider the concept for the film is more a good hand in a game of Top Trumps than an actual storyline.

Admittedly the Frankenstein monster doesn't get a whole lot to do until thefilm's finale and spends most of its screen time literally lying down on the job. But though the monster doesn't do alot, it is a key element in Niemann's schemes, and so in terms of the storyline, the monster's prescence is well integrated.


The main focus of the movie, though revolves around Niemann, Larry Talbot and the Hunchback Daniel. There is a nice dynamic between the 3 characters, and a neat subplot involving romantic rivalry between Daniel and Larry for the affections of a gypsy girl. Gypsy girl? I hear you cry ... Yes, with the inclusion of a hunchback, sorry make that 'The Hunchback', rather than having Daniel as a stock mad scientist assistant in the vein of Fritz or Igor, Universal decided to go more mythic and echo the classic Quasimodo and Esmeralda relationship.


Dracula's inclusion however is less well executed. The plot device of Niemann reviving the Lord of The Vampires and coercing him into serving his revenge plot is introduced well enough, but then the action wanders away from the main story. So in effect we have a Dracula vignette inserted into the middle of the film, which does rather chop up the flow of the story.


Now, how does this monster rally fare in terms of continuity? Surprisingly fairly well. Better than Frankenstein Meets The Wolf Man, though in fairness, this film didn't have to content with all of one characters dialogue being cut. However there is one major howler - Dracula is revived from his staked skeleton when we all know that the Count's remains were incinerated by his daughter on a misty moor. Well, all of us who saw Dracula's Daughter do at any rate - a movie that seems to have passed the script writers by. And when Dracula is revived he now looks like John Carradine, who doesn't in the slightest resemble Lugosi. Still I suppose we could claim that this is a relation of the original Dracula (as we do for Son Of Dracula)...


But continuity snarl-ups are par for the course, particularly this late in the series, and House of Frankenstein is actually far better than either of it two immediate predecessors in this regard. However where the script really falls down is in terms of sense! Frankly Niemann's revenge plan is utterly bonkers on every level. It is revealed that when he finally captures two of his enemies, he plans to insert the brain of the Wolf Man into one, and transplant the brain of the other into the monster's body. All of which will result in one undergoing the curse of lycanthropy and the other being trapped in a patchwork body.


Now aside from the basic confusion in the script, that putting Talbot's brain in another body, will simply put Larry in a new body, this plan is still round the twist. Ok, so one of your enemies will now have the power to turn into the Wolf Man and claw you into kibble faster than you can say 'Who's afraid of the Big Bad Wolf'. And the other will suffer the living hell of being trapped in an inhumanly strong and virtually indestructible body. Great work Niemann - a revenge that will effectively gives your victims super powers! Genius! As Zaphod Beeblebrox would say - "Ten out of ten for style, minus several million for good thinking".


Then again Niemann is the Mad Scientist in this movie, so you could argue that as a wannabe Frankenstein he has got the wrong end of the stick and taken the 'mad' bit of his job description literally. Which would explain why his plan to play muscial brains is so totally tonto...


But enough of this filling in of clincially insane plot holes! I'll start sounding as barking as Niemann himself if I'm not careful. So onto performances. Chaney is dependable as ever as poor doomed Larry Talbot and Karloff really seems to be enjoying playing the scientist rather than the monster for once. J. Carrol Naish is also excellent as Daniel, giving the character a nice sense of pathos and playing of Karloff and Chaney very well. Carradine though seems a little unsure in his portrayal of the Count, and in fairness the script isn't doing him any favours. (However in the next movie in this series, he really - obligatory bad pun alert! - gets his teeth in to the role). Glen Strange is fine as the monster in the little he has to do, but it is pleasing to see the character being played by an actor with the correct height and build once again.


Now despite the problems in the script, this is still an entertaining movie. However when the script does work, such as the scenes playing out the love triangle between Talbot, Daniel and Illonka, the movie really hits the quality mark. Harking back to 'The Hunchback of Notre Dame' was a very inspired touch. Indeed I can't help feeling that there's a truly great little movie in here trying to get out - and with another couple of drafts done on the screenplay it could have made it.

In general, the cast really try to make it work, and there still some very nice set pieces and cinematography despite the reduced budget. Yes, it is the weakest entry in the series but it's not a bad movie by any means. It's not a great movie either, but it is really good fun. Watch it with your tongue firmly in your cheek and you'll probably have a blast with this.