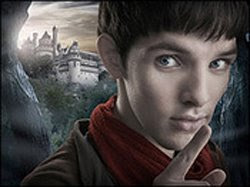 So we've got the halfway mark, and I thought it was high time for an update on how I feel the show is doing so far...

And the short answer is very well indeed. I've been througly enjoying these Saturday tea-time jaunts to Camelot. The show is delivering just the right mix of magic, adventure and humour to keep this viewer happy, and seems to be confidently stepping over any worries I had.

I've quite acclimatised to the modernist stylings of the dialogue. Of course on principle, I'd prefer a little more of the typical cod-period thee and thouing but I'm finding in Merlin the colloquial approach is working out well. Mainly this is due to the dialogue being sufficently witty and dramatic to carry it off. And I quite like the way that they actually do venture in the verily for soothe realms for the scenes of court formality.

Performances have been top notch and guest roles have been well cast. The regulars are gelling nicely, giving the show a strong ensemble piece feeling. I also like the way different episodes shift the focus; for example it was great to see Richard Wilson's Gaius take centre stage in tonight's episode.

Plot-wise, I'm enjoying the direction the story lines are developing. I'm guessing that like another very well-known series about a boy wizard, the writers are planning on this show to run and run - with the characters aging and presumably reach the point where they can tell the classic Arthurian stories.

On the effects front, I have to say I'm still not a fan of the Great Dragon design - it has failed to grow on me, and still reminds me of Churchill the nodding dog. Other than that though, the cgi has been up scratch, and generally not over used. And I delighted that in "The Mark of Nimueh", the Afanc appeared to be a good old fashioned, physically made creature model.

If I have one niggle though, it's the Great Dragon scenes. Design aside, he is getting a Mystic Meg in his cryptic pronoucements, to point you begin to wonder why they bother consulting him at all. But thankfully, we have had a few episodes where a trip to his cave wasn't obligatory.

On the whole though, I'm finding this is perfect TV fare for winter weekends and I'm looking forward to see where the rest of the series goes. And that's another thing Merlin is doing well - the great 'The adventure continues...' teasers. Can't wait to see what the scary drippy-faced blue demon king thing in next week's episode is all about!