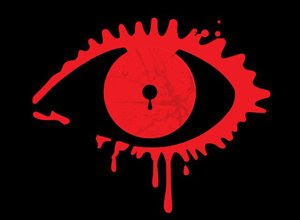 I think this is a first - a zombie TV series, complete with all the biting and gut munching we've come to expect of the risen dead post-George Romero. Considering the original Night Of the Living Dead, which set the template for a zombie apocalypse, came out way back in 1968, and that small groups surviving in inhospitable and unlikely places has always been a popular hook for TV series, it's amazing that a zombie serial hasn't been done before.

Although that said, whether Dead Set counts as a TV series is something we'll have to look at closer later...

So what is Dead Set? Basically it's a five part series currently being shown on UK channel E4 all this week. And you can expect a repeat on the parent channel, Channel 4 pretty sharpish, judging from the high ratings of the first two episodes. Oh and the DVD is out next Monday (November 3rd).

The premise is fairly straight forward - the dead rise, started eating all and sundry and the world ends. Just like every other zombie holocaust. However Dead Set's twist on the usual proceedings is that the action centres not on a hospital, shopping mall, or military base but on the reality TV show. So we have a group wannabe telly stars who slowly realise that the world outside has ended...

The major coup here is that rather than having to invent a fictitious show, the makers managed to secure the services of the daddy of reality telly, Big Brother. Seeing the zombie outbreak occur around the very familar sets of Big Brother adds massivley to the credibility of the story. Certainly, given the quality of this production, they could have pulled it off with a made-up show but featuring a very famous real world show gives the story much more impact. Plus we get to see Davina McCall in the thick of cannibal ghoul action, which adds hugely to the fun factor!

Also the show's creator, Charlie Brooker is primarily a TV critic, famed for his amusingly scaborous writing, and so Dead Set features an important but often overlooked element of a classic zombie tale - social satire. So naturally being able to weave his plot around the exisitng cultural framework of Big Brother has sharpened his pen in this respect.

As we are only two episodes right now, obviously it's hard to gauge how good this show is. But on the current evidence, I'd have to say that Dead Set is delivering a solid addition to the zombie genre. It's sharply written, fast paced and nicely directed - easily knocking the average dead flick back into its grave. The acting is pretty great too: Jaime Winston is delivering a fantastatic performance as the heroine, ably supported by the rest of the cast which includes the very great Kevin Eldon. And special mention must be made of Davina McCall, who has a much bigger role than the expected cameo, and has been brilliant.


Not only has she provided a terrific death scene but is currently doing sterling work as a flesh eating ghoul. Depending on the remaining episodes, she very well could be set to join the likes of Bub and the Tar man in the best zombie performance hall of fame. Certainly her eviction night catchphrase "I'm coming to get you" is taking on a whole new meaning.

Ok quibbling time! First up, be warned this show does feature fast zombies. Now I much prefer yer classic shambling dead, but I can live with speedy undead. And in Dead Set they are handled well; generally they do shamble about ... until they spot prey and then they start motoring.

Quibble number two - recently Mark Kermode has been talking about the 'Bayification' of modern direction (see the link to his site for the full rant), and there are elements of this in Dead Set. For those who don't know, Bayification in short can be defined as the absolute inability to keep the goddamn camera still, particularly during action shots, often to the point of making what is happening in the scene utterly incomprehensible. Now there is a little of this in Dead Set and so far I'm inclined to forgive it. Mainly as you can still tell what's going on, and it's being used reasonably sparingly. Also I suspect some quick shaky cutting is a cunning way to show full-on flesh chomping on TV without garnering too many complaints. (Quick aside: in the UK there is a weird double standard regarding horror - horror films must be shown very late at night, whereas the likes of Casualty can stage horrific accidents and liberally chuck gore about before the watershed).

Final quibble - at the start of this I mentioned we'd be looking at whether Dead Set counts as a TV series. Now judging from last night's episode, I'm not sure it was actually written to be shown in five parts, as the episode just seemed to stop rather than build up to a cliffhanger. It's too early to say but I'm guessing it was originally conceived to shown as a two or three parter. Or maybe even as an epic length TV movie. I'm intrigued to discover how it will be presented on the DVD - as they screened the whole thing for the press, plus the lack of credits, I'm betting we'll get the series as a movie. So possible this ISN'T the first zombie series.

However what Dead Set certainly is is the most convincing slice of horror seen on TV in a long time. And it's definitely rotted head and shoulders above most zombie cinema. I'm not ordering the DVD just yet but I'm damn close...