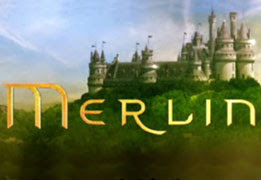 So this year, in place of Robin Hood the BBC are offering us a new series Merlin. Now while I applaud Auntie Beeb for going the whole hog and making further adventure series for what's now being refered to as the Doctor Who slot, I never really got into their Robin Hood series.

Overall I found the modernist dialogue jarring and it's grip on its historical setting a bit shaky. I felt that it was trying so hard to be hip and relevant, it was undermining the whole flavour of the Robin Hood mythos. Though in fairness, I should point out that I'd recent rewatched all the 1980's Robin of Sherwood - a series which to my mind is the pinnacle of Hood on screen. So with that series fresh in the memory, naturally the new BBC series was always going to seem a very poor cousin in comparison.

So when I sat down last Saturday to check out Merlin, my main concern wsa that it would fall into the same modernist pitfalls as its predecessor in this slot. However although it shares much of the same hip polish of Robin Hood, I felt it worked a good deal better. Perhap this is due to the fact that unlike the tales of Robin Hood, the Arthurian mythos is not so rooted actual history and consequently I'm apt to be alot more forgiving of anachronisms.

Also another key difference is that Merlin is telling new stories set in the Arthurian universe; in setting up a saga about Merlin's early years and breaking new story telling ground, this series is steering clear of unfavourable comparisons. For example, if the show was going to be a retelling of the classic Camlot legends, then inevitably we'd be measuring it up against John Boorman's Excalibur.

The first episode of the series introduces us to a fresh perspective of the mythos, setting out to tell the untold tales of Merlin's youth. It's Camelot via Smallville if you will. And it's an interesting approach, opening the door to a good rich vein of potential plots playing with the viewers' knowledge of what the characters eventually will grow up to be. The series opener chucks out two great curve balls - firstly that Arthur and Merlin don't actually like each other, and secondly the romantic frisson between Merlin and Guinevere.

In addition to this, we are also given a similar twist on the setting. Merlin is set during the reign of Uther Pendragon who has brought peace to the land after very dark troubled times. And part of maintaining that peace, is that the practice of magic has been outlawed. All in all, these elements open the way for a very interesting spin on Arthurian mythology and great scope for the series in terms of story arcs and character development.

The cast is also very strong - a rea lboon if they plan on taking the character's down the type of epic emotional arcs that Smallville and Buffy The Vampire Slayer did. Tony Head and Richard Wilson are as every bit as good as you'd imagine them to be, and Bradley James and Angel Coulby play great versions of the young Arthur and Guinvere. James in particular hits the right balance of arrogance and nobility for the teenage king-to-be. However the real stand out is Colin Morgan's Merlin who is an instantly likeable character - Morgan's performance is naturalistic and with subtle depths and proves he can more than carry this series.

Another piece of great casting is John Hurt as the voice of the Great Dragon. However here we hit the one down point - I really didn't like the CGI dragon. It wasn't that it was badly animated, it was more that I didn't like the creature design. To me the dragon's head appeared slightly too large for its body at some points, reminding me of one of the nodding dogs that haunt the back window ledges of cars.

However this is a minor quibble in an otherwise excellent opening episode. The series shows great promise and potential. Whether it will live up to this remains to be seen. It will be interesting to see what elements of the existing stories they work into the mix. However for now, I'll round off by saying that I've looking forward all week to see what tomorrow's episode brings ... A good result for any series opener.