The Ghost of Frankenstein 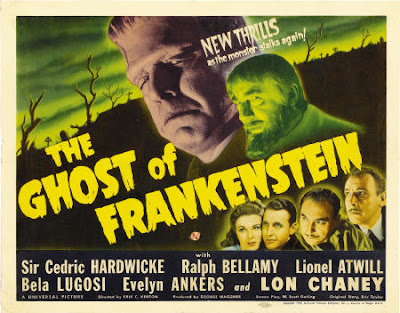 1942 brought us The Ghost of Frankenstein, the fourth entry in the saga and a turning point for the series as a whole. It is the first film in which Boris Karloff does not play the monster, lumbering duties being taken up by Lon Chaney Jr. But the major change was this - whereas the first three films has been unashamedly 'A' list pictures, Ghost of Frankenstein was the first to be produced for as a 'B' movie, meaning a quicker production on a smaller budget.

Despite the slashed funds, Ghost of Frankenstein still features decent sets and camerawork, and Erle C Kenton's direction is competent though somewhat uninspired compared to to Whale and Lee's efforts. But where the budget begins to bite is in the script.

On the plus side, the bones of the plot are actually quite good, featuring the continuing tale of Ygor's partnership with the monster. It features strong continuity with the previous films, something that the following three films would largely jettison to their detriment. However there are some niggles here. Firstly how did the monster survive immersion in the sulphur pit which Inspector Krough states is hot enough to broil a man to the bone. Secondly why had Ludwig Frankenstein been living in a neighbouring village, when Son of Frankenstein states that the Frankensteins fled to America? And why was they second son not mentioned before? And why does Ludwig have a basement lab full of monster reviving electrical apparatus? Were these Ken Strickfadden gizmos standard issue for medical practioners at the time? One wonders if the village chiropodist has a cellar full of sparking Ken Strickfaden gear too. On the more serious side though, one wonders why on earth the monster seems to agree to having his brain removed. And furthermore why the hell does he want the little girl's brain transplanted into his bonce?

Of course it doesn't often pay to expect high degrees of sense and logic in monster movie. But these plot holes aside, the real weakness of the script is that it has a truly 'B' movie sensibility. Whereas the previous films had character-driven dynamics, Ghost of Frankenstein emphaises the monster's exploits and the ghoulish thrills of mad science, with characters being plot devices to further this rather than creating any dramatic tension.

This is most clearly highlighted in Ygor. Bela Lugosi's performance of the character doesn't slip in quality but he has a good deal less to do. Much of his dialogue serves as exposition rather than character building. And Ygor lacks a Wolf or Krough to match wits against.

Similarly Lionel Atwill's Bomar is much underused. His subplot is actually quite intriguing. Apparently he was originally Ludwig's mentor, until a surgical accident ruined his standing in the medical community and now he finds himself relegated to assisting his former pupil. Naturally he is somewhat bitter and harbours a degree of resentment to Frankenstein - something that Ygor uses to ensure that he will get his brain trnasplanted into the monster's body against Ludwig's wishes. However at the film's climax, the new Ygor/monster discovers his body and senses are failing, as Bomar as blundered again; he's overlooked that fact that there is a tissue incompatibility between Ygor and the monster.

Now on paper this appears a solid backbone to build the story around, and finishes with a neat ironic twist. However in the actual film it falls flat as the script has not developed the characters of Ygor, Bomar or Ludwig enough to give it the necessary dramatic weight. Which is a real pity as from their performance in Son of Frankenstein, Atwill and Lugosi could have really carried this off. The final twist comes across as a last minute deus ex machina to foil the Ygor/monster hybrid rather than being the satisfying conclusion of the character's interweaving stories.

Aside from the script, the film does have one other major weak link - the loss of Boris Karloff. Creighton Chaney, bless him, performs well enough but lacks the pathos Karloff imbued the monster with. Chaney's monster is alot more stiff and robotic than Karloff's, but ironically his performance has the stereotypical movements we associate with the monster today. And in fairness, the script doesn't exactly call for much other than alot of lurching about. But acting styles aside, Chaney just doesn't look right in the Pierce makeup - his monster sadly is more chubby than cadaverous.

Despite being a definite step down from the previous films, Ghost of Frankenstein is still an enjoyable watch. Though you can't help feeling there's was a better film lurking in the material that a more developed script could have delivered. In many ways, it's a bit of an oddity. Despite it's continuity it doesn't quite fit in with the first three films due to the lower brow scripting. But it also doesn't fit with the following sequels as after this continity went out the window, and this was to be the last time the monster appeared on his own. The later three films were to be 'monster rallies' where Frankenstein's creature would have to share the screen with the Wolfman and the Count...