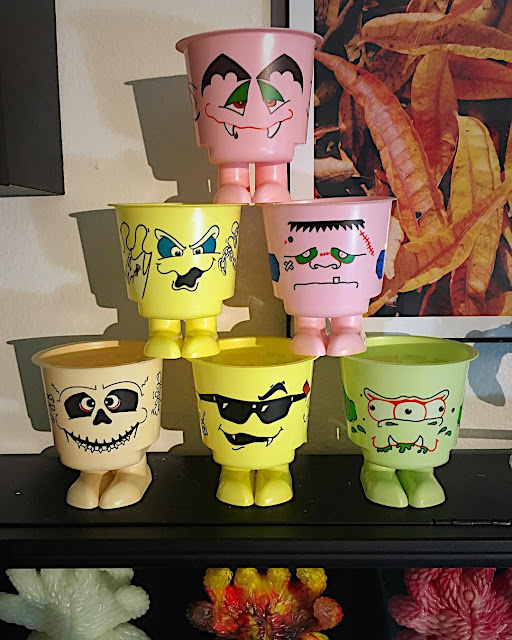 Welcome back dear fiends to another rummage in the 'Orrible 'Ouse of Terrible Old Tat! Last time we recounted the glorious ascent of the Fiendish Feet, an early '90s spooky snack that rose to dominate the world! Well, the chiller cabinets of your local Asda anyhow... However all empires fall, and despite being seemingly unstoppable, time was running out for the Fiendish Feet...


For three glorious years, the Feets marched on, an unstoppable force of horror and bad puns. But of course things were to come to an abrupt end in 1992. And what finished the Foots wasn't the rise of some rival product, but an enemy within. Freaky faces and painful punning names aside, the real draw of the Fiendish Feet were, well, their feet! People liked this funny yogurt pots that totter on two little legs, and so what did St. Ivel do in the black year of AD 1992? That's right, they ditched the charming pot with legs design. Yes, St. Ivel had became St. Evil, and committed the cardinal sin of changing a successful format.

In November 1991, they had launched yet another spin-off range, this time jumping on the  then very fashionable fromage frais bandwagon. Basically dairy firms had realised they could sell less yogurt, in smaller pots, and for the pretty much the same price, and therefore maximise profits from the gullible public who didn't realise that it was just a thicker yogurt and not the proper cheese derived French dish at all. And so, we got Fiendish Feet Fromage Frais - little mini-pots, weighing in at only 50g, and sold in packs of three not four. This diminutive trio consisted of Tiddly Wink (raspberry), Masked Menace (apricot*), and Sneaky Beaky (strawberry). Now thanks to their smaller size, these pots didn;t have the well loved, and indeed well moulded, pair of legs and feet. Instead the lower half of the pots were contoured to give the impression of two legs. And frankly it just wasn't the same. 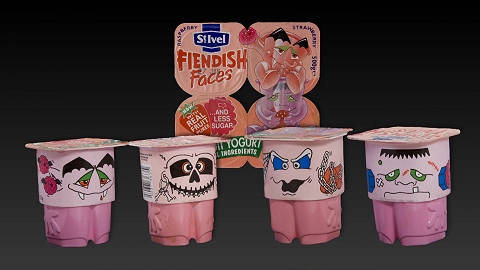 However St. Evil, I mean, St. Ivel thought differently. Perhaps the pots were cheaper to make this way. Anyhow they pushed ahead with this new format in 1992, and introduced the pretend leg contoured pots to the main range. However some one had an inkling that this change wasn't going to play well with the Feet Faithful, and hence the final two rangers were rebranded as Fiendish Faces. Firstly we has the "Real Fruit Yoghurt" range - which saw the original foursome reborn. And then later there was a range of Fiendish Faces Freezable Mousses in August 1992. But this was to be the final end for the Fiendish Feet.

For not only had their raison d'etre, their legs and foots, gone, but this final range couldn't be bothered to do a range of flavours. Yes, we had four new characters - Snow Joke, Freddy Frostbite, Drip Dastardly and Eski Moan - but the trouble was they were all strawberry flavour. And hence unsurprisingly the range came to an end. After all, what is the big deal about being able to freeze a mousse anyway? It might be handy for parents doing the once a month big shop, but hardly a selling point for their spawn.

But that wasn't quite the end, the Fiendish Faces once again reappeared  in the late 1990s. However this return was to be short -lived, as they returned in their smaller fake leg contour pots, again losing their own fiendish USP. Likewise these made a similar error in pitching to grown-up rather than kids. These were "bio pots" - now that might be a big magic buzz word for the kind of people who wanted "and this was made with fruits that agreed to be the dessert in the first place" assurances all over the packaging, not cartoon monsters and bad joke names. They are generally of the opinion food just have lots of sciency sounding words on it, and picture something natural like a picture of a twig on it. Meanwhile the only things bio that might excite the average kid are bionics and biological warfare. And with that double fail the revived Fiendish Faces vanished rather quickly.

However if they'd brought back the pots with proper legs and feet... Well, that could be a different story.... 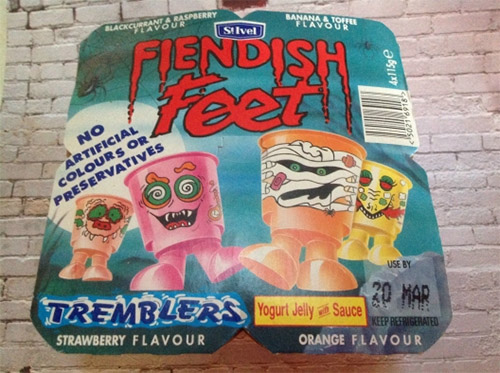 For the full history of Fiendish Feet, do visit http://www.radiofeeds.co.uk/fiendish/  which has pictures of all the characters and lots of the merchandise! You'll believe a bumbag can have fiendish feet!