The 'Orribe 'Ouse of Terrible Old Tat - A Bull and Cow Story...

Welcome dear fiends once again to the 'Orrible 'Ouse of Terrible Old Tat! Step this way folks as once again we sort through assorted dusty boxes of eclectic ephemera, But no, not that one! Never that one! You'd never guess what's lurking in there! Although to be fair, with a few clues you might... Particularly if you mis-spent your youth messing about with any incarnations of tonight's item! For our exhibit today is an enigmatic game requiring a logical mind and sharp powers of deduction, and what's more, one that has long been wrapped up in a few little mysteries of its own! But I'm getting ahead of myself. Let's go back the beginning...

Now at some point in the 19th century, and no one is exactly sure when, a little game for a couple of players emerged. It was intriguing, challenging and perhaps best of all, as it required just a few scraps of paper and a pencil, it could be played on the sly, at work, in lessons, or in church. We don't know who invented it, and like many such games that have spread through oral culture, it has gone under various names down the years. However these days, it is best known as Bulls and Cows. And it is played like this...

The first player devises a sequence of four numbers - for example, 4321 - and writes it down where the brave soul that is to be their opponent cannot see it. Player Two then places a guess as to what that number is. Of course, the odds of randomly guessing the sequence correctly first time are millions to one, and therefore Player One will then give some hints - a correct number in the right place in the sequence is a "Bull", while a number that is in the sequence but in the wrong place is a "Cow". Hence to return to our example sequence, 4321, if Player Two had guessed it was 6123, they would be informed that had gotten one Bull and two Cows in that guess. Then armed with this information, Player Two may hazard another, hopefully more informed, guess. And thus by a series of logical deductions, and it has to be said a little luck, the sequence could be discovered. Usually the game is played in an agreed number of rounds, with each player taking turns to set a sequence, and whoever works out the sequences with the overall least number of guesses wins.

There are several variants, most notable one that sees the game being played with a theoretically simpler to guess  three digit sequence, and a version that replaces a number code with a word. Quite why it is called Bulls and Cows, nobody knows. But I would guess that possibly the name comes from correctly guessing the right number in the right place was termed a hitting a bullseye in the early days of the game. And while we are on a speculative tip, it is also possible that Bulls And Cows inspired another well-known game that could be played on the quiet with pen and paper, Battleships. As they employ quite similar mechanics, one may well have led to the creation of the other, or perhaps both share some earlier guessing game as an ancestor.

As well as being a rather fun little game to while away some spare moments, Bulls and Cows also fascinated mathematicians. For example, it has been calculated that any number can be deduced in a mere seven moves. And given its popularity with folks who love mucking about with numbers, it is perhaps not surprising that Bulls and Cows formed the basis of one of the very first computer games. For way back in 1968, back when computers where huge beasts that took up entire rooms, all bulky cabinets, spinning wheels of tape, and a tendency to want to take over the world if SF shows of the period are to be believed*, a chap named Frank King coded a version that could be played on the mainframe at Cambridge University. A couple of years later in 1970, inspired by King's program, one JM Grochow created a version at MIT. These new computerised incarnations of Bulls and Cows were named simple "Moo".

Now one of the players of Moo at Cambridge was a fellow called Dr John Billingsley who in the early '70s just happened to have a consultancy with a plastics firm, Invicta. And around the same time, an Israeli postmaster named Mordecai Meirowitz had been inspired by Bulls and Cows to create a board game version of the old favourite that replaced numbers with coloured pegs. Meirowitz had shopped his creation around various toy firms but with no success. I'm guessing that games manufacturers couldn't see the point of making a version of the game with folks could play themselves with just a pencil and scraps of paper.

But as it happened at this particular moment Invicta were looking for to break into the toy market. Their big rivals, Auto Plastics had just gone under after being taken over by the Nestene Consciousness**, and Invicta were looking for a game to be produced that required a lot plastic molded pieces. Having encountered Moo at Cambridge, and having played at an old skool pen and paper version with his children, Dr Billingsley recognised the potential of Meirowitz's game, and thus the boardgame now known the world over as Mastermind was born!

Making its debut in 1971, Mastermind was an instant success and in the early years of the 1970s pretty much conquered the world. And indeed, it is still going strong today, with new generations discovering the delights of code-breaking and plastic pegs in their spare time. However there have long been questions around Mastermind that not even the best codebreakers have been able to answers... And next time, we shall have a crack to finally answering these enigmatic questions! 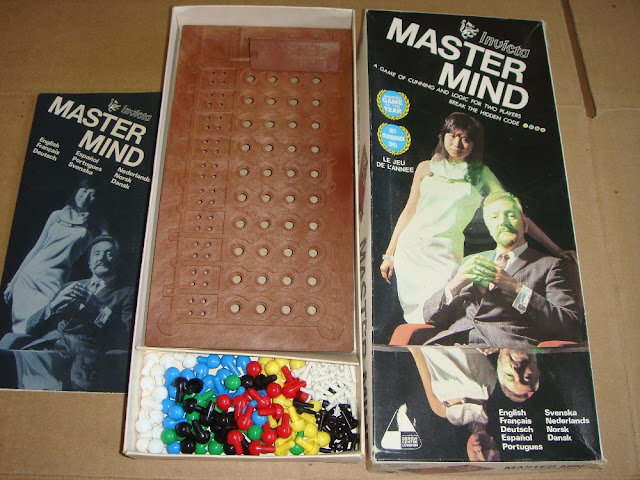 * Probably best not to, to be honest
** At least according to leaked files from U.N.I.T.

Ah, the simple pleasures of the 1970's. And who's that sitting there in the chair- isn't that Jim Moon?

Ah now the mystery man's identity will be revealed next week!

I can add a tidbit to this - Invicta Plastics were based in part in a town called Oadby, just outside of Leicester. The old factory was knocked down about 10 years ago and a Waitrose now stands in its place.

That isn't the fact though. My maternal grandmother, who spent the 1970s raising my mother and uncles from teens to young adults in Leicester, knew the people on the Mastermind box. *IF memory serves*, through knowing someone at Invicta through local political circles, the man on the front of the box was apparently a local barber who had the perfect look of an intellectual. The woman was either a hairdresser client or the wife of someone at Invicta - I'll check with Mum the next time I speak to her.