FOLKLORE ON FRIDAY - The Secret Life of Statues 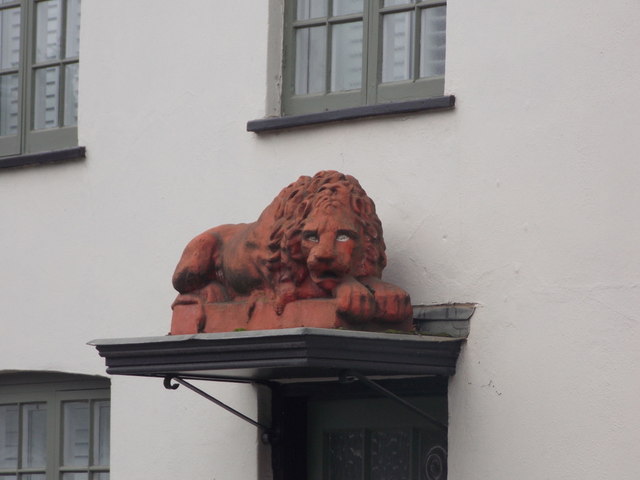 The Red Lion of  Sturminster Newton

In recent weeks we've been investigating the odd behaviour of assorted stone monuments. And aside from various standing stones and megaliths being prone to start mucking about when no one is watching - revolving, walking and even going swimming - we have also found that these seemingly supernatural powers of animation and movement extend to more recent man-made stoneworks such as statues as well. And while there is a massive historical and cultural gulf between a modern piece of public art and an ancient dolmen erected in the earliest years of human civilisation, it would seem that they often share the same folkloric tradition of moving themselves about by magic.

Firstly we have a great many statues that like to go for a wander on the quiet. A statue at Lacock Abbey is said to animate and go for a stroll at the stroke of midnight, while in the heart of London, at St Queen Anne Gate, the stone version of the aforementioned monarch takes an annual constitutional around the neighbourhood on the 1st of August every year. At Burroughs Green in Cambridgeshire, once a year on the night of the 30th of April, a pair of statues on the school door are said to get off their perches and dance on the village green. While on a more eerie note, St Lawrence's Churchyard, in Darlaston, it is said the figure of a child on a monument to a deceased mother and infant has been seen wandering off on its own through the graves. And there are many more examples too, many of which display the two distinct patterns that we have already encountered with moving megaliths - either animating on the stroke of midnight or upon a specific date.


Much like their ancient relatives, the standing stones, a surprising number of statues and stonework figures seem to enjoy popping off for a drink. A sculpture known locally as Stone Moses at Weekly in Northamptonshire, is said to animate on the stroke of midnight and make its way down to the River Ise for a drink. Outside the Red Lion pub in the village of Sturminster Newton, in Dorset, is a stone effigy of the titular beast, which according to the locals, climbs down from its plinth at the stroke of midnight to take a drink from the old water pump by the town bridge. Once again this is a surprisingly widespread tradition, with all manner of statues of people and animals leaving their plinths, pedestals and perches to nip off for a drop or two. Even some weathervanes are said to indulge in this behaviour too, However my favourite tale of this type concerns the brilliantly named folly, Jack the Treacle Eater Tower at Barwick, Yeovil. Thought to have been built around the 1820s, this eccentric structure is a huge arch of rough stone that supports a spire-like tower, topped with a statue of Hermes. Supposedly it commemorates a faithful messenger boy named Jack who would run errands between Barwick and London with only a pot of treacle for sustenance. According to legend, at midnight the statue climbs down to either take a drink from the nearby lake, or according to some go hunting for any left-over treacle! 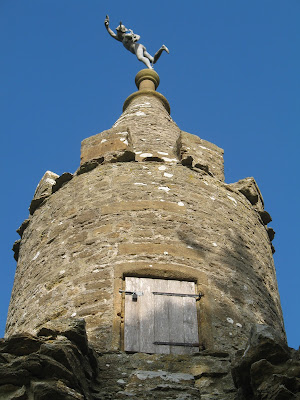 We tend to think of folklore as stories that are old or antique, but age seems to be no barrier in this tradition of stories. For example, Leeds Town Hall is guarded by stone lions sculpted by William Keyworth, and despite being erected in 1867, there are local legends that these stone beasts leave their plinths and prowl around at night. Even more recently, the city of Nottingham gained a new Council House in 1929. Erected at Old Market Square, the impressive building is guarded by art deco stone lions created by local sculptor Joseph Else. However despite being an 20th century addition to the civic landscape, these stone beasts already have their own folklore - it is said that they will roar when a virgin passes by them!  And despite this seeming to be somewhat bizarre behaviour, even in the world of living statuary, they are not the only stonework to do this. For it is also said that the red lion statue outside the Cameron's Lion brewery in Hartlepool does the same thing.

So then what are we to make of all this? Well, as is often the case with mysterious phenomena, it is probably a mistake to look for one catch-all explanation. However we can identify some common threads running throughout the folklore of statues and standing stones. Firstly the last two mentioned examples give us a clue to the origin of some of these strange tales of stones with a life of their own. Those stone lions which roar at passing virgins I rather suspect are an oblique form of local joke - the punchline of which either the listener must deduce for themselves, or was too smutty for polite folklorists to record. The gag is that thanks to the morals (or lack of) in the local populace, no one has ever heard the stone beasts roar! And while the roaring lion stories may be a little nudge-nudge wink-wink, it is not unreasonable to assume that many other tales of living statues are similar tall tales told to amuse. The British sense of humour famously has a surreal streak, and spinning implausible tales of the athletic prowess of objects such as large lumps of stone that are clearly very immobile fits very well with our love of the silly and the absurd.

For example, a common feature is that these stones move if they hear the chimes of twelve, and here the joke is that stones of course can never hear anything! Some legends appear to be more explicit on this front, for example the Cheesewring performs its revolutions if it hears a cock crow (as detailed here) but as it is located in the middle of a moor, there are no farms anywhere nearby, and hence there are no cockrels to hear crowing. Likewise the standing stone in Pyrford (see here) is said to revolve when the church clock chimes twelve, except the church has neither clock nor chimes!

However as  I said, we should not make the mistake of looking for a one-size-fits-all origin for these tales. Certainly in this series we have discussed several stones who have appeared to have gained generic tales of movement, and judging by the surprising amount of very recent folklore surrounding statues it would appear that these stone stories are still spreading even in the modern age. But I suspect some sorts of stories are older than others. In the course of this little series of little articles we have encounters several stones that are said to be immovable in some way or another, whether being impossible to shift in the first place, or possessing the ability to return from wherever they are moved to. Now these kinds of stories I suspect come from an older, darker tradition - for like many other folk-tales, these stories are meant as prescriptions or warnings, a colourful (and hence memorable) way to spreading the message that certain sites or objects are out of bounds and not to be messed about with. The legend of the rampaging Wimblestone is an excellent example of this - not only will the stone attack anyone who attempts to move it. But also the old tales acknowledge and re-empt an important assumption: that as the Wimblestone is a remnant of an ancient site, there must be treasure there. In addressing what might be a common motive for wanting to disturb the stone, the legends make it clear that the effort is not worth the risk, and it would be very foolish to try. After all, not messing about with very old things or places is a common warning found in many branches of folklore. 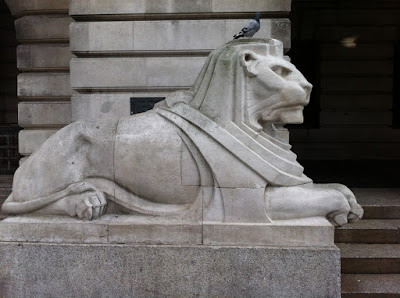 the stone lions of Nottingham

Considering that over the centuries many ancient sites were lost, as fields were ploughed up and the stones broken and moved, this particular strand of stone lore may well have evolved out of early concerns about  preserving our past. And while our forebears may not have had any idea of exactly how ancient some sites were, being old and mysterious was enough to give them local and historic importance, and so warning stories grew up around them. On a related note, I wonder if the various tales about moving statues are an echo or a remnant of this tradition; perhaps a milder, and in some cases, light-hearted way of discouraging boisterous youths from climbing on them and deterring would-be vandals.

Of course, there is always the human tendency to anthropomorphise anything around us. And given that our statutes often resemble ourselves or familiar animals, it is not surprising that people down the ages have entertained each other with stories that these objects that remind us of living things have secret lives of their own. And while it is more of a stretch to imagine the same imaginative process at work with some of the standing stones we have talked about in this series, it does seem possible that once again folks have been entertain by imagining these old monuments come to life at certain magical times.

Something that is nigh on impossible to discover, but would shed a good deal of light on the matter, would be know how seriously folks in past ages took these stories. Were they ever seriously believed? Or were they always just a surreal bit of whimsy and told with a tongue in the cheek? However whatever the origins of these tales, the fact that such stories are still springing up around modern statues shows that such tales still clearly hold a deep appeal for us. And given that these strange tales of stone-lore have not only survived but have continued to thrive into modern times, I suspect it is a story tradition that will continue for many years yet to come...