FOLKLORE ON FRIDAY - The Strolling Stones 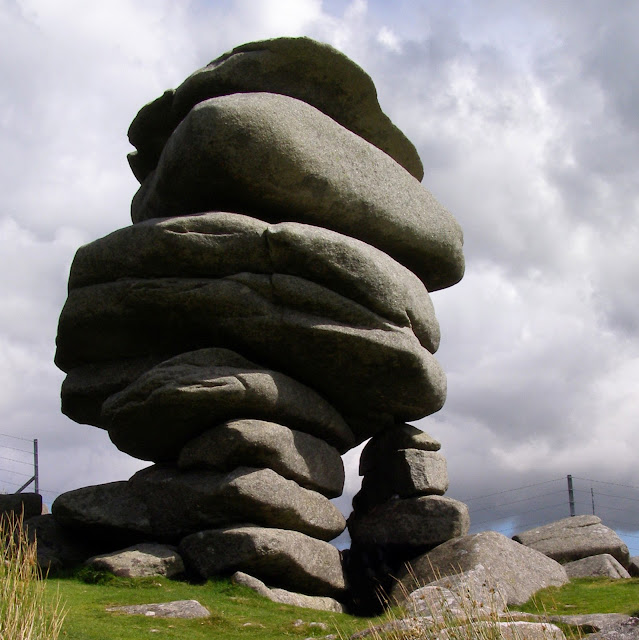 The Cheesewring at Bodmin Moor

Over the past few weeks we have been exploring some legends surrounding certain standing stones that claim that these ancient pieces of rock actually revolve, at particular times of the day or year, of their own accord. A famous example is the Cheesewring in Devon (pictured above), an iconic array of stones, often thought to be an ancient structure but was actually formed by wind and weather erosion. It has a typical folkloric origin tale, in this case it is said that the Cheesewring is the result of rock throwing contest between a local giant Uther and Saint Tue. But also according to legend, the topmost stone revolves at dawn when it hears a cockcrow. In this case, we should perhaps note that in addition to the miraculous ability to rotate itself, as it is located in the wilds of Bodmin Moor, the Cheesewring must also possess preternatural auditory senses too as the nearest farms where a cockerel might be lie many miles away!

Last week I outlined a theory that these tales of self-turning stones perhaps originated in the 18th century, thanks to a highly influential book recording how on the Isle of Barry, an alleged survival of Druid rituals was the custom of walking around a local standing stone. And the idea that standing stones were linked to Druids and people would "take a religious turn" around them seeped into the folklore of many megaliths, and became corrupted into tall tales that the stones themselves did the turning. And as we have discovered in recent weeks, the alleged ability of stones to revolve or rotate frequently appears to be a generic attribute added to more elaborate and individual folklore stories about them.

However I suspect this generic attribute of turning themselves at cockcrow or certain days of the year, while sounding rather bizarre to modern ears, easily took root in folklore due to the presence of an earlier related story tradition. For while revolving now and again might sound very odd to us, it is in fact the very least of the magical powers of mobility that ancient standing stones were reputed to possess. To begin with we have numerous legends and old tales of stones that walk. For example, in Gloucestershire, near the ancient market town of Minchinhampton, is a menhir called the Long Stone, which does considerably more than revolve!


"When the Longstone hears the clock strike twelve, it runs round the field," as almost every child in the place will tell you.

Furthermore, not far away is another megalith, one that is thought to be the remnant of a long barrow. And this standing stone is keen on a bit of exercise as well, as Mr Patridge goes on to relate -


In Avening parish, about half a mile south of the Longstone, is "Tinglestone," a menhir crowning a long barrow; Mr. Frost of Avening tells me that it too* "runs round the field when it hears the clock strike twelve."

Skipping a little further north, we have the famous monuments at Avebury, which comprise of three stone circles and an ancient henge. To the north of the village lies one of the larger megaliths in the complex, a diamond shaped sarsen known as the Swindon Stone. However despite weighing in at an impressive 65 tonnes, the Swindon Stone likes to get out and about too, with local legends asserting that it is apt to go for a wander, and crosses the nearby road at midnight. 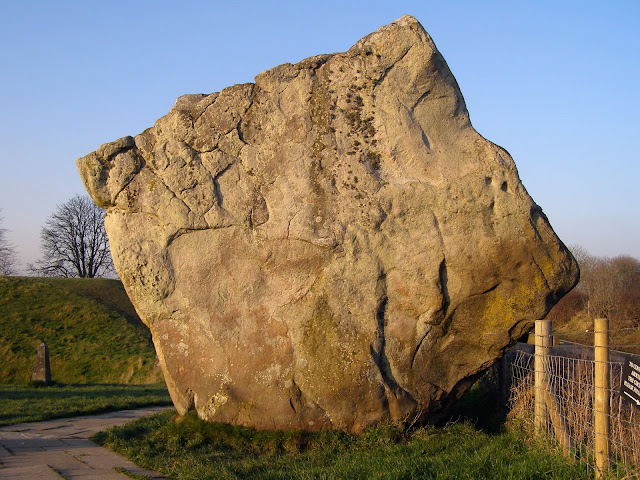 The Swindon Stone at Avebury

Now of course it would be easy to dismiss such legends as idle fancy, however we do have more detailed reports of the secret strolls taken by standing stones. Consider the following tale concerning the Wimblestone, located near Shipham, related in the book Somerset Folklore (1965) by Ruth L Tongue -


Zebedee Fry were coming home late from the hay-making above Shipham. It were full moon, for they'd worked late to finish, and the crop was late being a hill field, so he had forgot what night 'twas. He thought he saw something big and dark moving in the field where the big stone stood, but he was too bone-weary to go chasing any stray bullock. Then something huge and dark in field came rustling all alongside lane hedge, and Zebedee he up and dive into the brimmles in the ditch till it passed right along, and then he ran all a-tiptoe to reach Shipham. When he come to the field gate he duck two-double and he rush past it. But, for all that, he see this gurt stone, twelve feet and more, a-dancing to itself in the moonlight over top end of field. And where it always stood the moon were shining on a heap of gold money. But Zebedee he didn't stop for all that, not until he were safe at the inn at Shipham. They called he all sorts of fool for not getting his hand to the treasure - but nobody seemed anxious to have a try - not after he'd told them how nimble it danced round field. And nobody knows if 'twill dance again in a hundred years. Not till there's a full moon on Midsummer Night.

It is interesting to note that "wimble" is thought to be derived from an old word meaning 'lively' or 'giddy'. And indeed there are other tales of folks falling foul of the Wimblestone, with one story alleging it attacked a farmer who struck it with a stick, and chased him across the countryside until he took refuge in a nearby church! 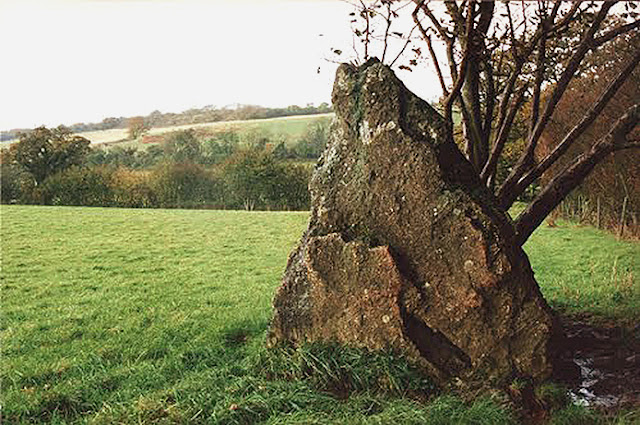 The Wimblestone, seen here behaving itself for a change

As a side note, it would seem that tales about the marauding Wimblestone inspired one of the stranger monsters ever seen in Doctor Who. In October 1978, an adventure for the Fourth Doctor (played Tom Baker) began entitled The Stones of Blood. Now as well featuring Druidic rites, megaliths, and Celtic goddesses, we were introduced to some alien monsters called the Ogri. These space criminals had been hiding out on Earth, and as they were a silicon based life form, they disguised had themselves as menhirs! The practical upshot of which was we had standing stones moving around at night in search of blood to drink!

But to return to the realm of folklore, thankfully though, it would appear that most stones that like a stroll aren't as aggressive as the Wimblestone. However it would seem that such stories of walking stones are in fact very ancient indeed. Around 828 AD, a Welsh monk named Nennius wrote an epic work entitled Historia Brittonum which recounted the history of the British Isles and its peoples. Much of the material in the volume was fanciful to say the least and owed more to legend than actual historical fact. And while it is of limited value to historians, it is a treasure trove of folklore. For example, Nennius makes a very interesting reference to a tale about an ancient standing stone found in Wales -


The third is a stone which moves at night in Glenn Cindenn, and though it should be cast into the sea, or into a cataract, it would be found on the margin of the same valley.

It is also worth noting that it is thought that Nennius didn't actually pen all (or according to some scholars, any) of Historia Brittonum, and that the text was assembled from even earlier anonymous sources. The mention of the stone returning to its site if ever moved is also a common feature in moving stone lore, alongside stories of the stones resisting and foiling any attempt to move them. For example, our bad boy rockstar, the Wimblestone is alleged to have rolled over and crushed a chap who tried to pull it up with oxen. So then, it would seem we can trace stories of strolling stones back at least to the 7th century. Little wonder then that the apparently more recent additions to folklore involving stones rotating took root so quickly. And as we shall we next week, ancient stones often did more incredible things than just taking an occasional hike... 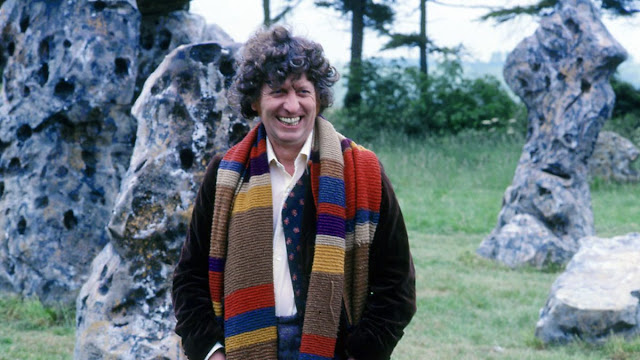 Doctor Who and the Stones of Blood