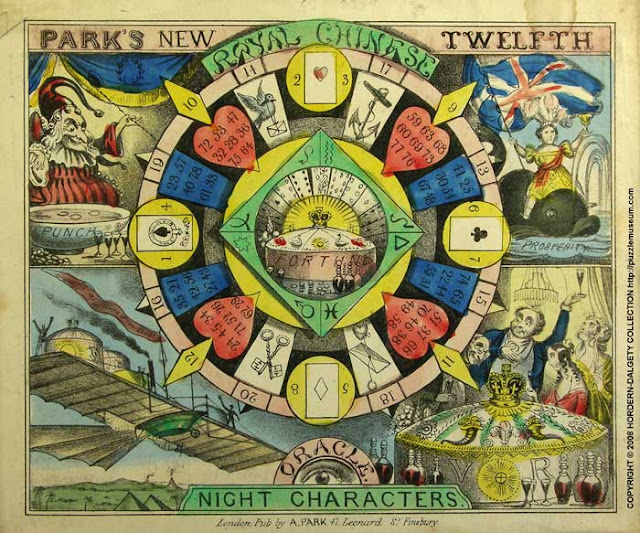 Well dear friends, Christmas is over for another year and most of us now are picking up the threads of our usual routines. Now many complain that Christmas is far too overblown these days and seems to take up more and more time every year, but if one looks back at Christmas customs of years gone by, you find that up until relatively recently our forebears would have been still celebrating. Of course everyone has heard of the Twelve Days of Christmas, but rather than being a kind of stripped down version of advent as is often assumed, this festive dozen didn't come before what we consider to be Christmas, but turned up afterwards.

For the Twelve Days of Christmas actually begin upon Christmas Day and run all the way through until January 6th, the Feast of the Epiphany in the traditional church calendar. And while now we only really remember this older version of the Christmas season in the tradition that we must take our decorations down by Twelfth Night (January 5th or 6th depending on if you are counting nights as preceding days or not), in the not-too-distant past this day was marked by celebrations of fun and feasting that rivalled Christmas Day itself. And why was such a fuss made of this last day? Well simply because in the old agricultural calendar, it was back to work on the 7th of January, or rather often the nearest Monday after, and hence Twelfth Night was the culmination of the holiday season. However of course in the 19th century as society became more industrial and urbanised, the tradition began to fade, and with the corporatised working cultures of the 20th century not countenancing giving wage slaves twelve days plus off at Christmas time, the Twelfth Night festivities all but died.

Now as for the best known remaining Twelfth Night tradition that this is the day to take down the Christmas decorations, rather than being some ancient piece of folklore, it would appear to be a more recent invention. Indeed, its part in the Christmas calendar is already in jeopardy, with many folks taking down the decs on New Year's Day, and yet others boxing up the baubles on Boxing Day. However historically speaking in centuries past it was actually traditional to leave the decorations up until 2nd the February, and at some points in history our forebears left their halls decked with boughs of holly until Easter! So rather than Christmas expanding every year, all the signs are that it is in fact shrinking, with our holiday period actually becoming shorter in real  terms!

However while these old bumper-sized holidays may seem astounding to us now, and the old Twelve Days of Christmas are now only remembered as a song, there are plenty of remnants of the old tradition remaining in folklore and local customs, with many places having their own individual ways of marking Twelfth Night. As many of these festivities were marked with food and feasting, there is a widespread tradition of making a Twelfth Night cake, often with added surprises. We are all familiar with the traditional sixpence (or modern coin equivalent) being slipped into the Christmas pudding, and the Twelfth Night cake has similar attached customs. As Robert Chambers noted in his Book of Days (1869) -

In England, in later times, a large cake was formed, with a bean inserted, and this was called Twelfth-Cake. The family and friends being assembled, the cake was divided by lot, and who-ever got the piece containing the bean was accepted as king for the day, and called King of the Bean.

However there were variants to this custom too, with other items being adding into the mix. For example, in one version if you found a twig in your portion of cake, that meant you were a fool. Over time, these special additions were replaced with trinkets and charms, silver ones if you were well-off, and in the 18th and 19th centuries Twelfth Night cakes became huge elaborate affairs with towers of icing and mounds of toppings. Many scholars hold that as the Twelfth Night traditions began to die out the tradition of adding lucky items to the cake, was enfolded into the lore of the Christmas pud. 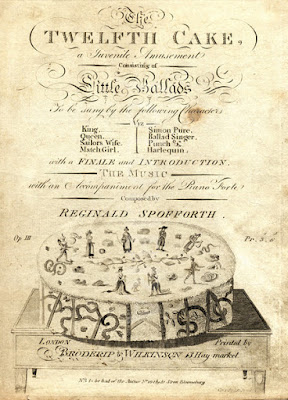 Another common piece of Twelfth Night folklore revolves around the Yule log. Traditionally the Yule log was not some chocolate confection, but a huge piece of wood that was placed in the fireplace on Christmas Day. The log would be kept burning throughout the Twelve Days of Christmas, with often being considered unlucky to let it go out during this time. The log of course was eventually formally extinguished at  Twelfth Night, with many regions' lore holding that a portion of it, or sometimes its ashes, was to be kept to light next year's Yule log.

However as we often note in these excursions, folklore is often very local, and hence up and down the British Isles many places have their own individual traditions associated with Twelfth Night. In many areas it is one of the dates in the calendar marked out for some wassailing. Again while this is a tradition we now associate more closely with Christmas, but in older times it was a common feature of Twelfth Night celebrations, most famously perhaps in the counties of England where cider is produced, with the wassail being performed in orchards to wake the trees for spring. In a similar vein, a tradition that also acknowledges the beginning of a new agricultural year and a return to work, are the various customs associated with Plough Monday, which marked the start of the first week after Epiphany.

Plough Monday, which was was celebrated in northern and eastern England, has a host of traditions with several common features. Firstly there is some kind of procession with the plough at the centre, in some cases this is part of a ceremony to bless the plough for the coming year, but in other areas it is more akin to wassailing, with the "Plough Boys" taking the implement from house to house and asking for contributions of food, drink or coin. However much like similar Halloween traditions, should a householder prove to be uncharitable or unwelcoming, the Plough Boys may well plough up their gardens or doorstep! It is perhaps not surprising that the celebrants in many Plough Monday festivities adopt some form of disguise, ranging from the simple blacking or reddening of faces with some rustic make-up, or donning elaborate costumes. However this dressing up, aside from perhaps preserving the anonymity of the mischievous Plough Boys, also crosses over with attendant customs. For many Plough Monday traditions including the performance of mumming plays or a version of morris dancing (often called "molly dancing" in this instance). For more on this fascinating set of traditons, do visit Mr Pete Millington's excellent and comprehensive study found here - http://petemillington.uk/ploughmonday.

Other places in England have even more unique Twelfth Night traditions, with one of the more famous being held in Haxey, Lincolnshire. On the 6th of January, the little village holds what is called the Haxey Hood - a rowdy contest which see the more game villagers join together into a huge scrum - called "the sway" to gain the titular hood - a leather tube - and attempt to transport it to one of four pubs in the village. The origins of this annual game are unknown but we do know it dates back to at least the 14th century, and it is still played with great gusto (and occasional minor injuries) to this very day.

And all of the above are just merely scratching the surface of Twelfth Night lore. For example, we have not even mentioned assorted traditions, mainly from Europe, where Christmas gifts are given on Twelfth Night, and I shall to return in subsequent years to examine some of these traditions in more detail. However I do hope that this introductory article has perhaps reawakened some interest in celebrating Twelfth Night once more. Personally I quite like the old concept of Christmas Day begin not "the big day" but just the beginning of the festivities, and marking the end of what used to be called Christmastide with another big knees-up before having to return to work! 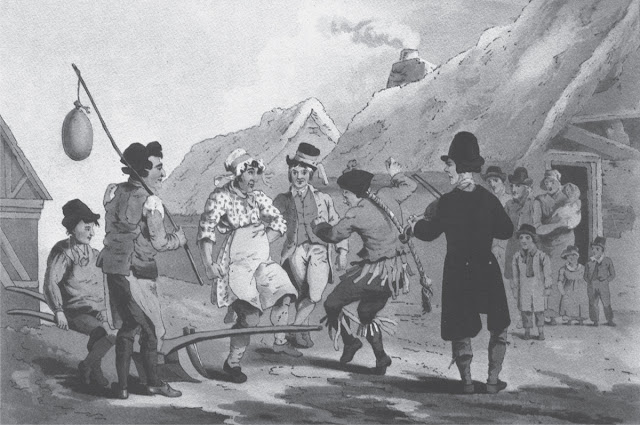 I may observe 12th night festivities in the future. I have pretensions of returning to a more traditional Dickensian Christmas every year but my traditionalist intentions are obliterated by the avalanche of selection boxes and Noddy Holder. I think it may be a goose for dinner next year, and given the price of them it will probably be a Canadian one that I deliberately mow down in my car.
ST.CLAIRE

Christmas is what you make it. I throughly recommend lashings of whisky, M.R. James on the BBC and long walks in atmospheric countryside to burn off excess goose. I also like to read The Victor Book for Boys (various years). I do not recommend watching anything on television, unless the BBC do another James.

Overheard on the train, a mother talking to her young son...

"And when we get home, we'll have to de-Christmas the house."

"Yes, it's bad luck to leave the decorations up."

"But that means we'll be wasting money."

It turns out the kid had spent 40p on a cheap, tacky good luck chairman to keep bad luck away. Doing other stuff to get rid of bad luck, such as taking down the decorations, would mean that 40p was wasted! His mother wasn't convinced by this argument for some reason...