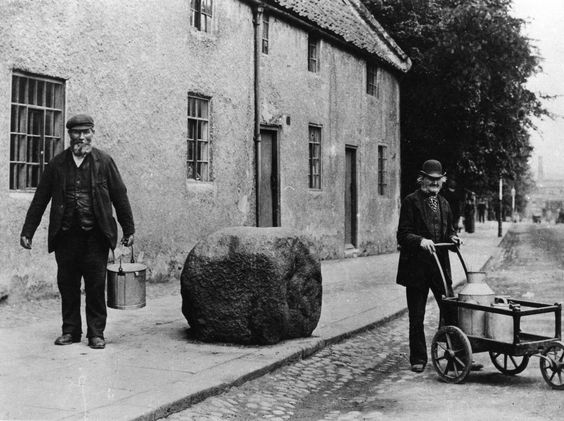 Last time on Folklore on Friday, we were exploring the history and legends surrounding the Bulmer Stone of Darlington. And one of the more curious tales about this ancient boulder of granite was found in an old rhyme from the 17th century, a little verse that alleged the stone would rotate when the clock struck twelve. Now it would be easy to dismiss this bizarre legend as mere whimsy; after all traditional verses like this are full of nonsensical things, often seemingly invented to make lines rhyme. However what sounds like sheer poetic fancy to us, often has a real story to tell - for example, numerous nursery rhymes allude to historical events or have forgotten hidden meanings.

Now while it sounds highly odd that a huge stone should arbitrarily turn itself around at certain times, when one surveys the folklore attached to various notable stones and rocks across the British Isles, one discovers that this is not an isolated incident. For, perhaps surprisingly, there are several other stones that are alleged to behave in the same fashion. Indeed, generally speaking, the belief that ancient stones would move about by themselves appears to be a very common feature in the legends and lore surrounding them. However regarding stones specifically that rotate or revolve, there are several notable other examples.

On Hallam Moor, which lies on the borders of Derbyshire and Sheffield, is a large blocky rock called the Headstone, but is also known as Stump John and the Cock Crowing Stone. While its huge size and rough rectangular shape may suggest that this is a weather-worn megalith erected by our ancestors, it is in fact a natural feature composed of grit stone. It is often called the Headstone because thanks to fissures and cracks in the rock, from some angles it appears to have a crude face. However its alternate name, the Cock Crowing Stone, is a reference to the local folklore which claims that this huge stone turns itself should it hear a cockerel crow.

While we now know that the rock is a natural feature, earlier writers did indeed assume it was an ancient monument of some kind. And in turn this led to speculation that perhaps the name came from Druids sacrificing cockerels there, or that it cast a significant shadow at sunrise at certain times of the year, like the famous stones of Stonehenge, with the concept behind that latter theory being that cocks crowing is associated with sunrise. Modern studies suggest both these theories are somewhat fanciful, and unfortunately that leaves us none the wiser as to why a large stone should revolve. 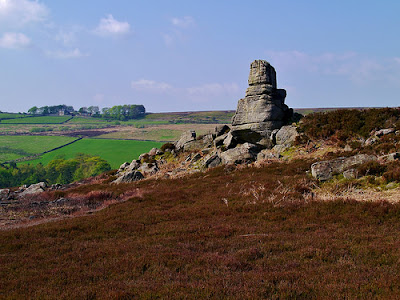 The Headstone of Hallam Moor

Another turning rock once lay in the village of Barrow, Suffolk, with old tales telling of the Highwayman's Stone. And although there appears to be no sign of it now, we do know more of its history. Allegedly there used to a large stone set in the pavement near the village school which supposedly marked the spot where a highwayman was hanged in the late 18th century. Local legend tells of how a Mr Macrow was collecting tithes in 1789 when he was shot at by a highwayman. The villain however missed his target and attempted to make an escape. But while fleeing, his horse lost a shoe, making his tracks very easy to follow. And unfortunately for this would-be Dick Turpin, he was tracked down by the local folks and hanged on the spot. But according to the legend, for reasons never made clear, the stone would turn itself over every New Year's Eve at midnight.

Now while it seems the stone itself appears to be lost, historians have discovered the tale is based on a real case. The events actually took place in 1783, and the tithe collector was a Mr Macro, who was indeed waylaid by a highwayman. Like in the legend, the criminal's undoing was his steed, although in reality he was tracked down thanks to his horse having a particular design of shoe. The perpetrator, one James Steggles, was indeed hanged for his crime, although the Norfolk Chronicle (1783) reports he was actually given a proper trial and executed in Bury St. Edmunds. (For more details check out the entry on Barrow on the Hidden Suffolk website).  And although the reasons why the commemorative stone should turn itself over remains a mystery, the day it performs this feat may well be linked to the date of the actual crime - for Mr Macro was attacked on 6th of January 1783. Given how the legend has somewhat blurred the details, it would not be surprising that the date of the crime had been shifted a few days to merge with a notable calendar date.

As to why the stone should flip around on this night of the year, it is possible that this is due to some details of the legend becoming lost. In the actual case of James Steggles, the key evidence against him in the trial was a pair of pistols, one of which had been fired, which were discovered concealed in some bushes by the intrepid victim turned detective, Mr Macro. Given how the historical details have drifted as they have made their way into local legend, it would not be unreasonable to hazard that perhaps the pistols were once said to have been hidden under a stone. And possibly, hence the Highwayman's Stone would turn in a supernatural recreation of the discovery of the evidence.

However again that is pure speculation, and while it sounds plausible, it is also equally possible that the Highwayman's Stone gained its ability to turn simply because moving on their own is a very common feature of stone lore. And next time, we shall explore some more examples, and see what light they can throw on the matter... 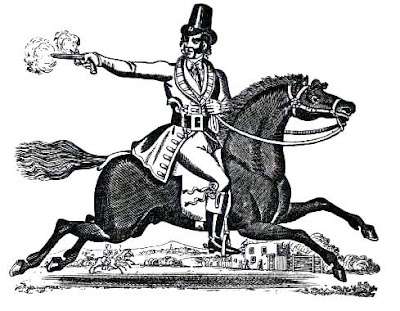 Apart from, great article. Good point about how facts can be distorted into legends. (I once read a London guidebook that claimed Jack the Ripper committed suicide by jumping off Westminster Bridge at midnight on New Year!)

Apologies, that typo escaped the proofreading this morning! Corrected now!

If I recall correctly, I'm guessing the guidebook was mistakenly referring to Montague Druitt, who was a prime suspect for many years

18th century..1789..1783..1783..1783..
I missed the typo but still managed to arrive in the right century.
Very well researched piece yet again Jim. We have a famous bannet stane in the district, although it looks more like a giant mushroom to my eyes. Also a crocodile stane, much less famous, and harder to find, but just as interesting.

Yes. That glaring typo (now corrected) detracted from an otherwise exemplary piece. Readers going forward will wonder what the furore was about, but for a (very) few, it seemed to be very real, and very disturbing.
There is a large stone in the corner of the field down from my residence. Its bright green with rock algae (I may have made that term up) and I think that if I had been born in a different century, that there would have been a few tales told of its origins. Probably more in the vein of being dropped of a mischievous devil's shovel rather than being unceremoniously deposited by a faltering glacier.
The date for this would be roughly 49000BC.
ST.CLAIRE