FOLKLORE ON FRIDAY - The Bulmer Stone 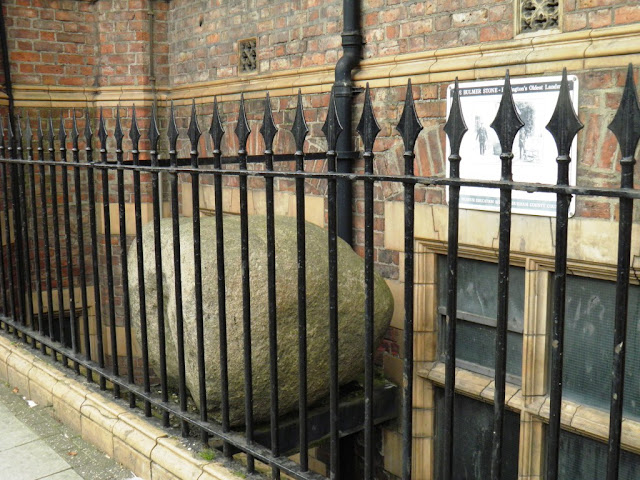 When you are doing the garden, you can never dig too far down without your spade hitting a stone, and funnily enough the same is true when you begin excavating the folklore of almost any region in Britain. For sooner or later you will find some legends or lore concerning a local megalith or similar prominent rocky feature of the local landscape. Now often such folklore centres around ancient standing stones or barrows, those mysterious relics left by our ancestors, and so beloved of horror story writers, but there are other stones with equally intriguing tales to tell. And while most of the curious stones that are the focus for local folklore are often in fields outside towns and villages, there are other rocks that enjoy a more, shall we say, urban existence.

One such stone can be found in the North-Eastern to of Darlington. If you head up out of the modern town centre into Northgate, one of the first historic buildings you'll see is an impressive Victoria edifice that used to be Darlington Technical College. This glorious old building was built in 1897 and designed by noted architect George Gordon Hoskins. However there is one very curious feature to the premises which has often baffled visitors down the years. For just inside the iron railings that surround the frontage, is a large rock, a huge roughly squarish boulder of granite. And a helpful plaque that informs you that this is in fact the Bulmer Stone. 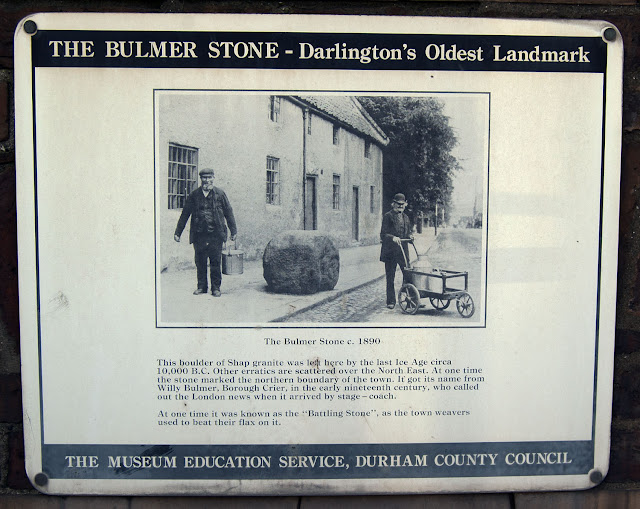 The stone apparently is a piece of Westmoreland shap, and is thought to have been deposited in what would become Darlington's high street by a glacier at the end of the last ice age. Now before the Technical College was built, this portion of Northgate was filled with cottages owned by the railway pioneer Edward Pease, who had his mansion and gardens just a little further down the road. Back then, the Bulmer Stone stood unfenced in the street, and in centuries past, when the area was mainly inhabited by the town's weavers, this piece of granite was called "the Battling Stone" as the weavers would beat their flax upon it. However it got its current name in the early 19th century, thanks to a fellow called Willy Bulmer. This local character became the town's unofficial town crier, for he would get copies of the London newspapers from the stagecoaches travelling up the Great North Road and read the latest news aloud in the street for the benefit of the public. And to best reach an audience and make himself prominent while doing this street news broadcast, Willy would stand upon the boulder in Northgate and hence it became known as the Bulmer Stone.

The stone holds more secrets from Darlington's history too. In the early 21st century, it was being discussed in the pages of the long running local paper, The Northern Echo -  for several bronze plaques had been discovered that showed George Stephenson's famous steam railway engine, Locomotion No. 1 alongside the Bulmer Stone. Originally it was thought that these plaques must have been produced to mark the opening, or an anniversary of the opening, of the very first public railroad in the world, the Stockton and Darlington Railway. However it was discovered these metallic mementoes actually only dated from 1909. They had been made by one Stephen Bell, who copyrighted this work as a "medal design" in 1911, and they had been sold through a local pawnbroker located at 58 - 61 Northgate named Arthur E Berry. However, what no one seemed to be able to work out was why the Bulmer Stone was pictured beside the famous locomotive. 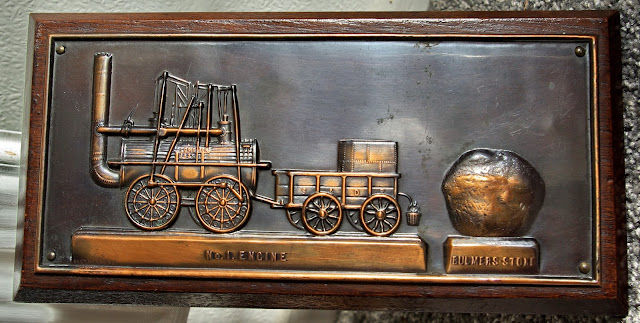 The actual answer lies in what might be considered industrial folklore. Apparently according to local stories, the pioneering steam inventor George Stephenson walked from Stockton to Darlington to pay a visit to Edward Pease. Pease was at the heart of Darlington's industry and was already planning a rail system to transport coal and other materials, but with the carriages to be pulled by horses. Stephenson however thought that the new steam engines he was developing would be better suited to the job. The two men struck a deal, and not too long after, in 1825, what would become the world's first train system, the Stockton and Darlington Railway, was born. Now as we have noted, Mr Pease lived on Northgate with the Bulmer Stone being more or less on his doorstep. And according to local legend, just before the historic meeting, Stephenson stopped to tie his bootlaces, resting his weary feet on the Bulmer Stone. Now whether the story is true or not we have no way of knowing, but certainly the tale must still have been doing the rounds in the early 19th century when these bronze plaques were made. 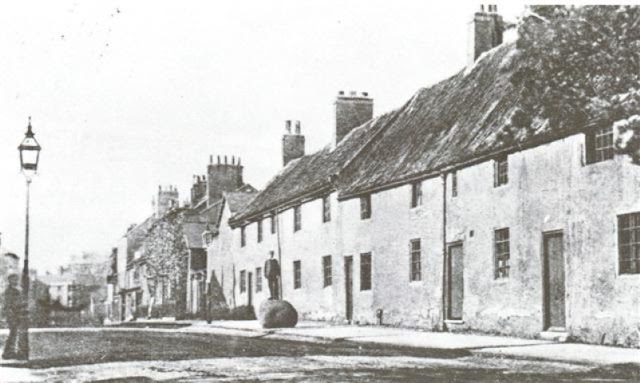 However there are even older and stranger tales of the Bulmer Stone. For it is mentioned in a seminal collection of folklore known as the Denham Tracts. This volume was put together by a Yorkshire tradesman named Michael Aislabie Denham between the years 1846 and 1859. Originally published in several parts, these miscellanies of lore were later collected together, reorganised and re-edited by James Hardy and published in two volumes by the Folklore Society in 1892 and 1895. Now in the Denham Tracts, there is a section entitled "Book Rhymes" which opens thus -

In the library of the Dean and Chapter of Durham is an ancient Missale Eomanorum, once the property of the church of Hutton Rudby, Yorkshire, as we learn from the following quaint rhymes contained in the bowke itself : —

This book was given by Samuel Davidson, Esq., to the Rev. George Davenport, Rector of Houghton-le-Spring, and was by him, in 1662, given to the library left by Bishop Cosin to the clergy of the Diocese of Durham.

In Darnton towne ther is a stane,
And most strange is yt to tell,
That yt turnes nine times round aboute
When yt hears ye clock strike twell.


A curious legend to be sure! However whether the stone is supposed to revolve at midday or midnight, or indeed at both times the clock strikes twelve is unclear. And, perhaps needless to say, as far as I know, there are no actual accounts of anyone ever witnessing this megalithic miracle. However weirdly, this reported phenomena is not as outlandish as it first sounds, for while the concept of a huge stone moving all by itself sounds bizarre, this is not an isolated case. For many other standing stones in the United Kingdom have legends attached to them that claim at certain times of the day they move or revolve. Usually the stones that are reputed to wander or rotate often have other tales told about them too, stories that give them a magical nature - such as they were people or witches turned to stone, dropped there by giants or devils, or even simply that they were the work of  ancient mysterious pagan folks. And while we now know that the Bulmer Stone found its place thanks to a glacier, and the town centre grew up around it, this old rhyme suggests that once upon a time there may have been other magical tales told about it. And this would explain why no one thought to move the stone out of the high street as the town grew up around it, for in such old tales it is normally held to be very bad luck to attempt to move a mysterious megalith... 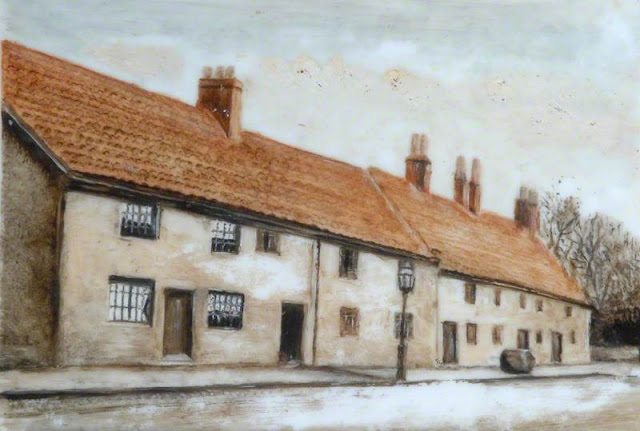