FOLKLORE ON FRIDAY - The Chime of the Harebells 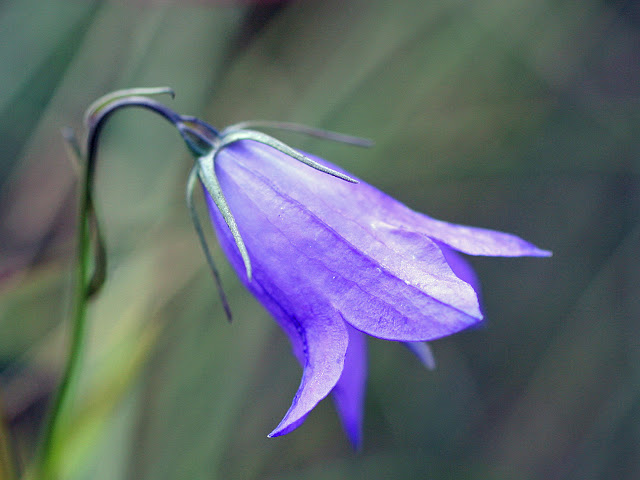 Over the past few instalments of Folklore on Friday, we have been tracing the folklore of the bluebell, and last time we discovered that it would appear that much of what has been quoted as bluebell lore is in fact folk beliefs centred around another flower, the harebell. Now the Campanula Rotundifolia, to give it its proper Latin name, is often referred to as "the Bluebell of Scotland", however actually grows all over England too. Now just to make matters utterly confusing, the "proper" English bluebell (Hyacinthoides non-scripta) is often called a harebell too, so then it is perhaps unsurprising the legends and lore of these two common woodland flowers have become entangled over the years.

For example, both have been claimed to be the flower of St. George. But as DC Watts points out in his excellent volume Dictionary of Plant-lore (2007), harebells bloom around August, months after St. George's Day (23rd April), whereas the bluebell begins to flower around the end of April. Mr Watts therefore theorises that it is the bluebell that is properly St. George's flower, but thanks to their names being used interchangeably at many times and in many regions, the tradition has been recorded in harebell lore too.

And looking into the various traditional and country names the harebell has had over the years, we find clear evidence that its folk traditions have overlapped and intermingled with that of the bluebell. For harebells are also known as witch thimbles, witch's bells, the Devils bell, dead men's bells and the fairies thimbles - names that it shares with, or at least are very similar to, the assorted folk names for the bluebell. And in the light of what we already know, one has to ask which flower actually had the lore originally - for as we have seen in our previous strolls through the bluebells, actually folkloric sources are somewhat thin on the ground.

However looking into the literature of the harebell, we find an abundance of references and links to much of the folklore that is usually attributed to the bluebell. For example, in Notes on the Folk-lore of the North East of Scotland (1881) by Walter Gregor, we are told -

The bluebell  (Campanula rotundifolia) was regarded with a sort of dread, and commonly left unpulled

While in The Folk-lore of Plants (1889), TF Thiselton-Dyer expands on this -


Among further plants of ill omen may be mentioned the bluebell (Campanula rotundifolia), which in certain parts of Scotland was called "The aul' man's bell," and was regarded with a sort of dread, and commonly left unpulled.

Now the Scottish man name for the harebell mentioned here "aul' man's bell" (meaning old man's bell) is very illuminating. For in Scotland, "the Aul' Man" was a nickname for the Devil himself, and therefore one did not wish to incur the wrath of the Dark Lord by picking his chosen flowers. And while in modern times we do not associate fairies with the Devil, in ages past there was a close connection between Hell and the world of faery. As we have mentioned in the past, the elves and sprites of folklore are dangerous beings, often cruel and malicious, and furthermore there was a belief that the faeries owed Hell an annual tithe of souls. Therefore it was thought that they snatched away travellers and children (sometimes leaving leaving changelings in their place) in order to spare their own kind being sent to the inferno.

Also closely allied to the elven folk were the witches. To begin with, witches in old European folklore were thought to be in league with the Devil, but in many witch trials in the United Kingdom, in particular those in Scotland, we have many testimonies from alleged witches that they not only consorted with evil spirits and attended sabbats with the Devil and his imps, but also had dealings with the faeries; learning spells from them, and even visiting Fairyland. With such an ominous triumvirate of associations occurring in their alternative names, it is no wonder folks were wary of picking harebells. 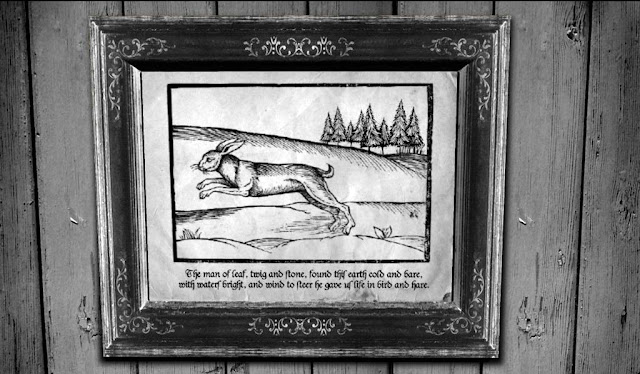 from The Lost Crown by Jonathan Boakes

And there is a further association with old magic contained within their proper name too. According to the Oxford English Dictionary, the name comes from their tendency to grow where hares were seen, and the hare has had a long association with magic and witches. Without falling down this particular rabbit hole - for hares in folklore is a vast subject in itself - let us just quickly note that witches were often said to be able to turn themselves into hares -


It was into a hare the witch turned herself when she was going forth to perform any of her evil deeds, such as to steal the milk from a neighbour's cow. Against such a hare, when running about a farm-steading, or making her way from the cow-house after accomplishing her deed of taking the cow's milk to herself, a leaden bullet from a gun had no effect.

Now harebells coincidentally produce a white milky sap, and consequently were sometimes called milk-ort - meaning "milk herb". And given that they grow where hares were often seen, one can understand why in some places it was said that witches used the sap of the harebell to effect their transformations into hares. I have seen it claimed that that harebells were one of the ingredients in the flying ointments cooked up by witches, however as I have yet to discover a recipe which mentions them, I suspect that this alleged magical use of harebells is a distortion or misunderstanding of the belief they were used in transformations into hares.


But showing a lighter side to the flower, but retaining the old connection with hares, there is a superstition that they rang to warn rabbits of foxes, a belief referenced by John B Tabb in this poem from his collection Child Verse: Poems Grave and Gay, first published in 1900 -

Ring! The little Rabbits' eyes,
In the morning clear,
Moisten to the melodies
They alone can hear.

Ring! The little Rabbits' feet,
Shod with racing rhyme,
If the breezes they would beat,
Must be beating time.

Ring! When summer days are o'er,
And the snowfalls come,
Rabbits count the hours no more,
For the bells are dumb.

There are numerous other references to harebells actually ringing too. We find this old belief mentioned in many places, for example in a song from 1911,  An Autumn Song with lyrics by Fred G Bowles and music by Bertram Luard-Selby, we have these  lines -

How soon the Autumn day is done,
The briefer light, the lower sun
Pale hare-bells ringing in the wood,

Somewhat melancholy I'm sure you'll agree, and possibly a faint echo of an older, more sinister belief about harebells ringing. For as we have heard previously, another of their country names was "dead men's bells" referring to the idea that to hear the harebells ringing was an extremely ill omen. And once again when we follow the references to harebells ringing, it is not long before we find the faeries once more. In The Romance of Nature; or, The Flower-Seasons Illustrated published in 1836, Louisa Anne Twamley (later Louisa Anne Meredith after her marriage in 1839) has the following verses in the Autumn section of her book of poems and pictures -


Have ye ever heard, in the twilight dim,
﻿A low soft strain,
That ye fancied a distant vesper hymn,
﻿Borne o'er the plain
By the Zephyrs that rise on perfumed wing
When the sun's last glances are glimmering?

Have ye heard that music with cadence sweet,
﻿And merry peal,
Ring out like the echoes of fairy-feet
﻿O'er flowers that steal?
And did ye deem that each trembling tone
Was the distant vesper-chime alone?
The source of that whispering strain I'll tell,
﻿For I've listened oft
To the music faint of the Blue Harebell,
﻿In the gloaming soft.
'Tis the gay fairy-folk that peal who ring
At even-time for their banquetting.

And gaily the trembling bells peal out
﻿With gentle tongue,
While elves and fairies career about
﻿'Mid dance and song.
Oh! roses and lilies are fair to see,
But the wild Blue Bell is the flower for me!


Now while the verses are certainly taking a somewhat quaint a view - a very early example of the fairies of folklore being transmuted into the cute versions of modern pop culture, they are clearly linked to the older and darker associations the flower has with supernatural beings. And as this poem hails from the 1830s, it predates much of the earliest studies into folklore, and so we have the harebell providing a historic source for what are often touted as bluebell beliefs. One can also see from the wording used in this poem how the confusion has arisen over the years, with bluebell and harebell being used interchangeably.

And harebells have continued to have magical associations even in the modern age, with a fine example being found in the poem The Lane by Edward Thomas. In this verse we have an allusions to hearing the supernatural peals of the little flowers, resulting in a moment of mysterious transcendence, being taken out of time for a moment...

Some day, I think, there will be people enough
In Froxfield to pick all the blackberries
Out of the hedges of Green Lane, the straight
Broad lane where now September hides herself
In bracken and blackberry, harebell and dwarf gorse.
Today, where yesterday a hundred sheep
Were nibbling, halcyon bells shake to the sway
Of waters that no vessel ever sailed ...
It is a kind of spring: the chaffinch tries
His song. For heat it is like summer too.
This might be winter’s quiet. While the glint
Of hollies dark in the swollen hedges lasts—
One mile—and those bells ring, little I know
Or heed if time be still the same, until
The lane ends and once more all is the same. 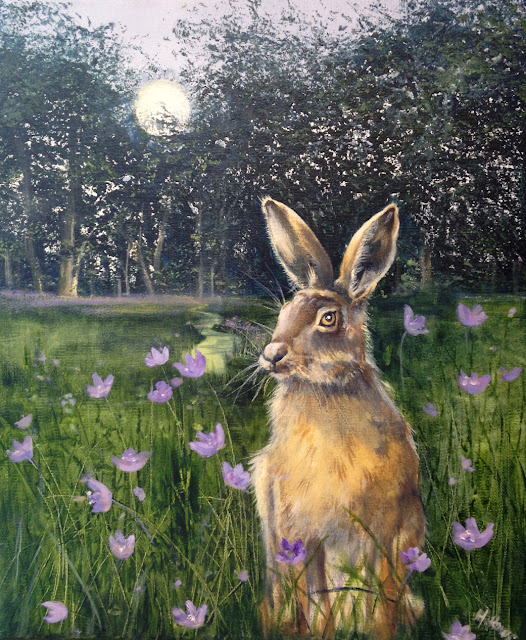 I love this! Is the photo from The Lost Crown just made up, or do you know the origin of the original drawing? Thank you!
Martha Boyle
stmgs3109@yahoo.com

I believe the original is a woodcut from an old book, to which Mr Boakes added the verse and has appearing as a framed picture in a white witch's cottage you can find in The Lost Crown game :)

The book was A short Treasie of Hunting: compyled for the delight of Noblemen and Gentlemen, by Sir ThomasCockaine Knight. And you ca nsee it here - http://www.luminarium.org/renascence-editions/hunting/cockaine.html