FOLKLORE ON FRIDAY - The Bluebells and the Fairies 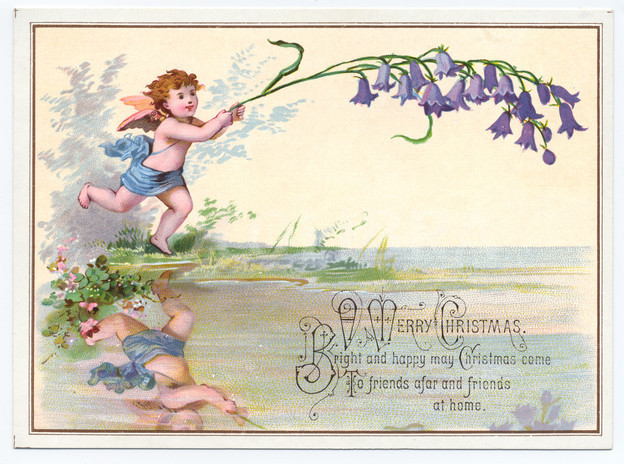 Over the last couple of weeks, we have been exploring the legends and lore surrounding the humble bluebell. We first uncovered a wealth of superstitions surrounding this well-loved woodland flower (see here), but then we discovered that there was a suspicious lack of historical sources for all this oft-quoted folklore (see here). However not being one to give up easily, I dug deeper, consulting all manner of books on folklore, old histories, and numerous compendiums of herb and plant lore. But despite all this searching, I only managed to discover only a couple of sources. In the Devonshire Association Transactions Volume 65 from 1933, there was mention that in parts of Devon it was considered unlucky to bring bluebells indoors, however the reasons why weren't made clear.


In Somerset they say you should never venture into a wood to pick bluebells. If you were a child you may never come out again, and if you are a grown-up you will be pixy-led until someone meets you and takes you out.

And there I think we may have finally hit the jackpot. For Katherine Briggs was a hugely influential folklorist, penning many volumes that are now recognised as classics in the field, and hence many subsequent tomes on folklore have been assembled from old lore collected and recorded by this eminent scholar. And it is my guess that a good many of the standard write-ups of bluebell folklore one finds in modern books and webpages are built on the slim foundations of this reference. Over the years it would seem that Briggs's reference to this piece of Somerset superstition has been  (mis)represented as a common belief, with an isolated local bit of folklore being careless transmuted into a national superstition. However as the book it appears in was only published in the 1960s, and in turning up so many blanks in so many other major reference works, I began to wonder if the roots of all this bluebell folklore was actually lay elsewhere entirely.

Now there was a huge craze for all thing faery in Victorian and Edwardian England, and this ran so deep that our modern view of faeries owes far more to the romanticised whimsy of the Victorians than it does the actual legends concerning elves and the like. And in this period old folk tales were dressed up, indeed often sanitised, and repackaged as literature for children. Now in addition to trimming away all the rough and nasty edges of the old tales, we also had a pantheon of very talented authors and artists creating whole new worlds of imagination. Sometimes they drew on existing stories but more often than not they were inventing entirely new creations. Hence our modern conception of fairies as cute little Tinkerbells faffing about with flowers is very much a product of Victorian and Edwardian art and literature, creatures of what we might term faux-lore rather than authentic folklore. However in the old classics of children's literature from these times, there is sometimes a mixture of both real folklore and modern whimsy; something Katherine Briggs herself went on to note in her fleeting mention of bluebells. She speculates there may have been a similar Northern tradition of bluebell woods being places to become pixy-led, citing an incident a story book by Beatrix Potter. 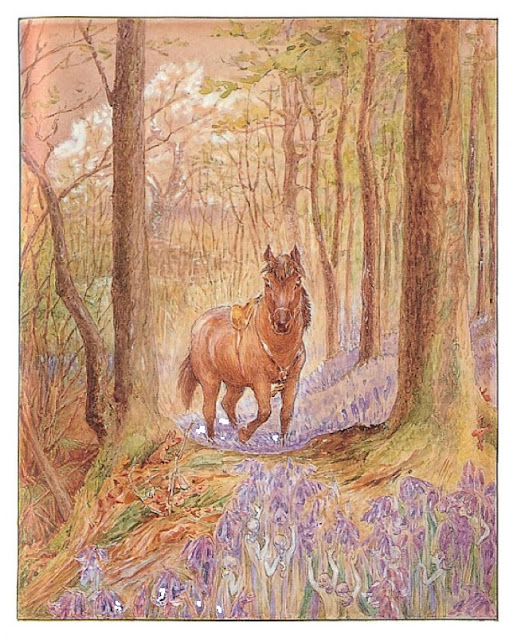 For in 1929, Potter published a book entitled The Fairy Caravan which tells the tale of a guinea pig called Tuppenny and is set in the countryside around Graythwaite Hall in the Lake District, Cumbria. During his adventures, Tuppenny and his chums are riding in a horse-drawn caravan and attempt to pass through a little wood of oak trees which "was covered in bluebells - as blue as the sea - as blue as a bit of sky come down". However despite the wood being small, it takes the animal pals a good four hours to get through it, as they seem to be just going around in circles, while unseen hands pelt the travellers with little oak apples. And although Potter never had the elvish inhabitants of Pringle Wood make a direct appearance in the text, her illustration accompanying this portion of the tale clearly shows the Little Folk amid the flowers.

Now clearly this incident in The Fairy Caravan recalls the bluebell lore mentioned by Briggs. However this is never explicitly stated in the text, and hence I'm not sure we cannot draw any firm connections here. Many varieties of faeries were said to enjoy confusing travellers in this way, and to visit certain places where they were said to dwell was to risk becoming pixy-led. And so, without specific references, Potter could well be drawing on Cumbrian faery lore attached to oak trees, or woodlands in general, rather than bluebell superstitions - for example there are similar (although admittedly more sinister) shenanigans when entering fairy-haunted woods in Algernon Blackwood's Ancient Light (which you can hear here), but there are no bluebells flowering there.

On the other hand, given the popularity of Beatrix Potter, that evocative picture of the blue pixies in the woodland flowers may well have made a connection with these flowers and fairies in the popular imagination. However once again, there is a twist in the tale, for while this story was first published in 1929, the book wasn't released in the United Kingdom until the 1950s. So then, much like the Briggs volume, we have another rather relatively recent reference... Was there anything a bit older?

And so I delved a little deeper, with my next port of call being the Flower Fairy books - a hugely popular series of seven books written and illustrated by Cicely Mary Barker. The first book was published in 1923, establishing the format of a full page picture of a particular fairy and the flower it inhabits alongside a short verse telling of its character and nature. Over the years six more books would follow, along with a posthumous volume and numerous anthologies collecting the volumes together in whole or in part. And I think it's fair to say that when people generally think of fairies these days, they are picturing little floral folks like Barker's creations.

Now the actual verse for the fairy of the Bluebell (which you can see here), appears in the first volume Flower Fairies of the Spring (Blackie 1923). Unfortunately for our purposes, it isn't terribly enlightening, however it does come with an interesting note that reads "This is the Wild Hyacinth. The Bluebell of Scotland is the Harebell". Now Ms. Barker would cover the Harebell in her second book, Flower Fairies of Summer (1925), and here I think we have the key to our puzzle, for the verse reads thus - 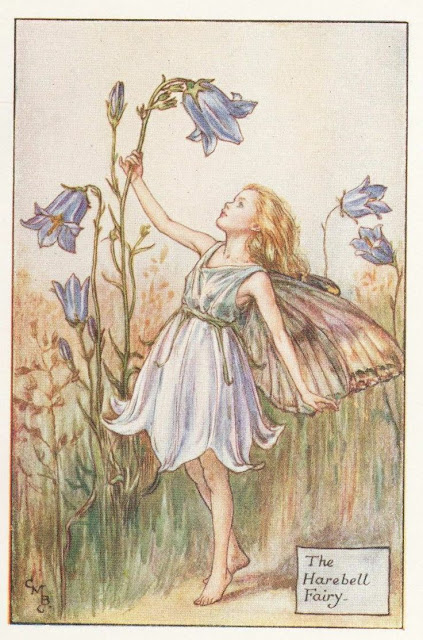 The Song of the Harebell Fairy

O bells, on stems so thin and fine!
No human ear
Your sound can hear,
O lightly chiming bells of mine!

When dim and dewy twilight falls,
Then comes the time
When harebells chime
For fairy feasts and fairy balls.

They tinkle while the fairies play,
With dance and song,
The whole night long,
Till daybreak wakens, cold and grey,
And elfin music fades away.

Now we did we not read in the first part of this series how it was said that bluebells tolled for faery gatherings? And while 'harebell' is an alternative name for the English Bluebell (the Hyacinthoides non-scripta), but there is another flower that bears this name, the Campanula rotundifolia. Now this flower has similar delicate bell-shaped blooms, but is of an entirely different species. And despite its title "the bluebell of Scotland", harebells are actually common throughout England. They tend to flower later in the year, around August and hence they are sometimes also known as harvest bells. And following this lead, we find the following entry in The Perpetual Almanac of Folklore by Charles Kightley (Thames and Hudson 1987) - a compendium of lore compiled from various sources, some dating back to Tudor times -

Harvest Bells are better known as "Harebells", "the Bluebells of Scotland". This is the flower of the magical hare, called Fairy Caps and Fairy Ringers, has supernatural protectors, so it is very unlucky to pick it.

Again we are seeing a large overlap with the bluebell lore here, and I rather suspect that there has been a good deal of confusion over the years, with most of what is commonly reported as bluebell folklore actually being the lore of the harebell. Certainly it may explain why proper historical sources for bluebell lore are so thin on the ground: the actual lore is hiding under the harebells. And we shall be following this lead through the harebells next time!