FOLKLORE ON FRIDAY - The Ringing of the Bluebells 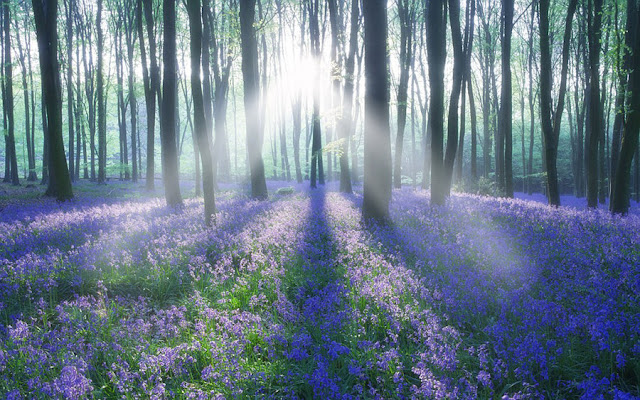 Well it appears that often seemingly mythical beast, the British Summer is finally here! The temperature is up, the sun is shining, and it's the perfect time to pop out for a pleasant stroll in the countryside. Now one of the great attractions of the British countryside at this time of the year is to take a walk in some bluebell woods. And this seemingly mundane activity has been something of an unofficial annual ritual for a lot of folks for many generations. Such is the popularity of going to see such swathes of blue, that not so long ago special trains would be laid on to carry visitors to the woodlands, or meander passed vistas showcasing the vistas clad in blue. For example, a service of "bluebell trains" once used to run through the Chiltern Hills through the blooming woodlands, and this natural floral display helped earn the designation of "An Area of Outstanding Natural Beauty". While in East Sussex, one particular stretch of tracks is still known as the Bluebell Railway.  Many nature parks and stately homes still make a point of advertising when their woodland will be carpeted with a stunning sea of gently nodding little blue flowers, and the National Trust even has a page telling you where the nearest bluebell wood is to you.

It is thought that the humble bluebell - that the Hyacinthoides non-scripta taxonomy fans - first appeared in Britain not long after the last Ice Age, and indeed the presence of a carpet of bluebells is often a signifier that a forest is a surviving tract of ancient woodland. However the little nodding flowers have not only been admired for their beauty but have also long been revered for their useful properties. In the Bronze age, our ancestors attached flights of feathers to their arrows with a glue made from bluebells, while the Tudors used a starch extracted from crushed bluebell roots to stiffen their iconic ruff collars. And for several centuries bookbinders have used bluebell derived adhesives to make and repair tomes.

In the modern era we have discovered that bluebells contain at least 15 biological active compounds that the plant utilises to repel insect and animal pests. And it would seem our forebears knew something of this, for general folklore has long asserted that bluebells are poisonous to eat, and one of the uses of bluebells recommended by herbalists, was treating spider bites. However folklore ascribes to them other more esoteric properties, such as being a good remedy for leprosy, and as a treatment for tuberculosis. However there is also a good deal of magic associated with the little flowers too, as demonstrated by the various folk names the flowers have garnered over the centuries such as witches thimbles and fairy flowers.

Firstly, as they begin to bloom towards the end of April, they have been long associated with St. George as that saint's day falls on the 23rd of that month, while in the language of flowers created by the Victorians, bluebells symbolise constancy, humility and everlasting love. And these associations may well be derived from older folklore charms, for two well-known pieces of bluebell lore reflect these properties: it was said that if you wore a wreath of bluebells you would compel a person to tell the truth. And if you turn a bluebell flower inside out, you will win the heart of your true love.

More generally, bluebells were considered useful flowers in other ways too. For example, the Encyclopedia of Folkore and the Occult Sciences Vol 2 by Cora Linn Daniels and C. M. Stevans, published in 1852, tells us -

If you see a bluebell, pick it and repeat the following words: "Bluebell, bluebell, bring me some luck before to-morrow night;" slip it into your shoe and you will get good luck

Folklore also seemingly draws on their repellent qualities as well, for it was said that bluebells may be used to prevent nightmares, Simply place some in or under your pillow, or just hang them near the bed and bad dreams will be kept at bay. Possibly this particular belief might be related to their long usage as an adhesive, but it is possible it may be derived from an older common strand of bluebell lore. For in many places, the little flowers have a strong association with the faeries, and as such it was dangerous to be messing about in bluebells woods.

It has been said that faeries hang their spells on bluebells to dry and hence disturbing the bluebells may unleash wild magic upon you, or just bring down the wrath of the faeries. Less whimsically, it was thought that walking in bluebells may lead you to become 'pixy-led' - that is to say, dazed by enchantment and unable to find your way out of the woods. And darker still in some corners of the country,  it was said that a child who picks a bluebell will be snatched away by the faery folk, never to be seen again. Unsurprisingly many folks held it was foolish to pick bluebells or bring them into the house.

However folklore is often very contradictory, and hence in some areas it was said that planting bluebells in your garden was a useful thing to do. Not only would it curry favour with the hidden faerie powers, but it was said that the bluebells would ring if unwelcome visitors approached your door. However once again these whimsical bits of bluebell lore appear to have older, darker roots. For more commonly, it was held that the faeries would ring the bluebells to call their kin to gatherings and meetings. And it was very bad luck to hear a bluebell ring, and in many instances it is said that to hear the chime of the bluebells was an omen of your own death, hence in some places these lovely little flowers gained the sinister name 'dead men's bells'... 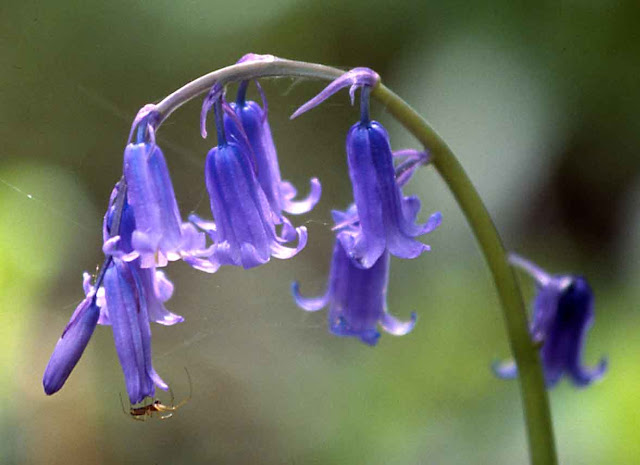