So then dear friends, we have reached the end! For here are the final two cards in the unhallowed vaults of the Tomb of the Trumps! But as a great man once said - no tears please: it's a waste of good suffering! So then, what are the last cards in our hand?

Well, first off we have this hirsute chap! 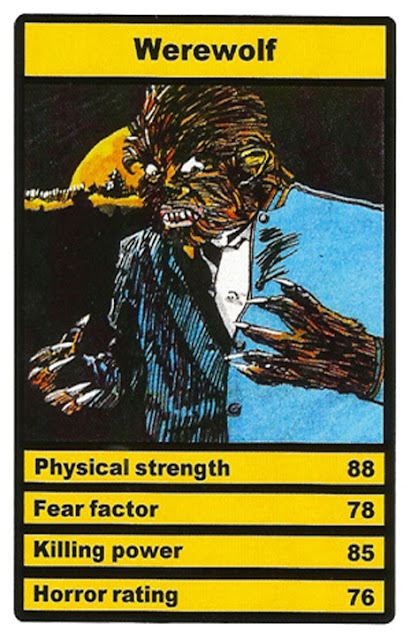 Now then, the last time we encountered a lycanthrope in these decks we did have a spot of bother identifying his origins. However in the case of these particular fellow, I'm sure his furry face is instantly recognisable to all fans of vintage horror flicks! For this is the titular transformer from AIP's I Was A Teenage Werewolf! 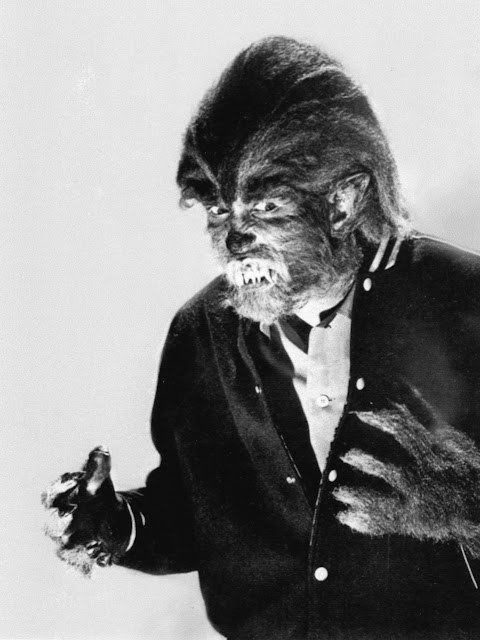 Made in 1957, this fondly remembered flick was the first of four creature features made by AIP to star teenage monsters - the others being I Was a Teenage Frankenstein, Blood of Dracula and How To Make a Monster. And in I Was A Teenage Werewolf, troubled teen Tony Rivers (played by a young Michael Landon) is sent to a psychologist to sort out his Rebel Without A Cause tendencies. Unfortunately for Tone, the head shrinker in question turn out to be a budding mad scientist (played by Whit Bissel) who treats him with a serum with brings out his primitive traits... Which of course will result in poor Tony ending up having to comb his face before he goes out and eating his fellow students!

Of all these AIP teen horrors, I Was A Teenage Werewolf has probably had the largest and most long-lasting legacy, for it launched Michael Landon's career, and inspired several imitators. Hanna Barbara clearly drew inspiration from it/ripped it off wholesale for their 1970s cartoon Fangface, and again to a lesser extent in the 1980s for The Drak Pack which featured the teenage children of famous monsters. Also in the '80s, we had Michael J Fox in Teen Wolf,  which in turn spawned a sequel and, in the last couple of years,  a TV series. Meanwhile the original Teenage Werewolf made a memorable cameo in Stephen King's epic novel It as one of the guises of the shape-shifting horror Pennywise.

So then, on to the very last card... And stop blubbing at the back! 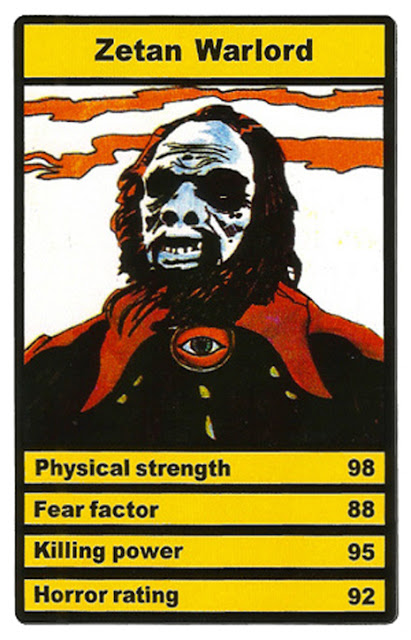 The Zetan factor strikes again! Presumably this fellow is an associate of the Zetan Priest we encountered in the Devil Priest pack! Now then, judging by the bestial teeth and simian snout many folks have pegged this mysterious chap as being none other than Boris Karloff as Mr Hyde in Abbott and Costello Meet Dr Jekyll and Mr Hyde from 1953. And it does look to be a good fit! See for yourselves! 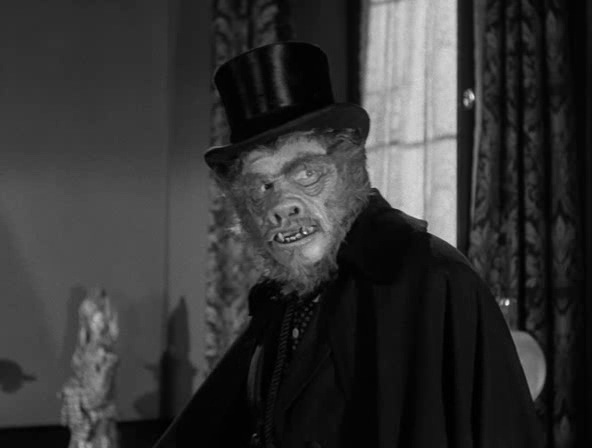 But it is not quite an exact match. For where is the widows peak and beard? And the Zetan Warlord has an impressively furrowed brow! So then I have an alternative suggestion, as this card has always reminded me of something else, from an entirely different realm of fantastic fiction. For from first seeing these cards, the Zetan Warlord has always put me in mind of the Ogrons from Doctor Who! In particular, this publicity shot from the fabled Radio Times 10th Anniversary Special  - 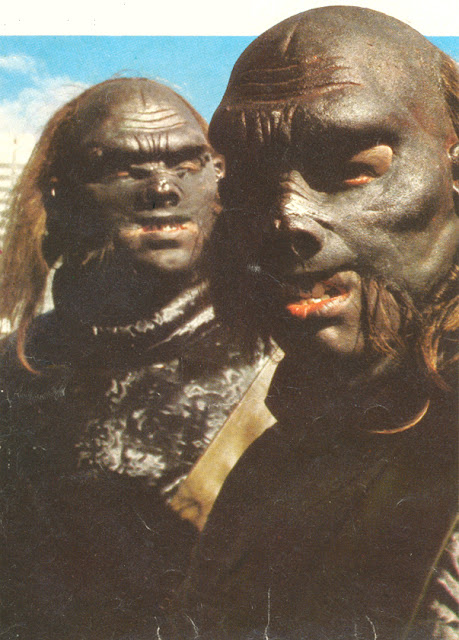 The Ogrons appeared in two stories in 1970s Who - Day of the Daleks in 1972 and returning the following year in Frontier in Space. Also they made a cameo appearance in another story that ran between the two - Carnival of Monsters in early 1973. And undoubtedly they made additional guest appearances in countless childrens' nightmares...

Now I reckon this famous publicity shot of them is a better fit for the Zetan Warlord - for we have a similar high domed forehead, and heavily shadowed faces as well as the simian features. And let's not forget too that our Unknown Artist had borrowed from the same era of Doctor Who several times before, nicking creatures and aliens for the Venusian Death Cell, Fire Demon, and of course, the Zetan Priest!

And so guys and ghouls, the time has come to seal up the heavy doors of the Tomb of the Trumps. However despite getting to the end of both packs of cards, some mysteries still remain, and a handful of cards are still lacking a definitive origin. So then, should new evidence be unearthed, rest assured the tat-haunted Tomb will open up once more...

I've always thought Zetan Warlord was based on the A&C Hyde. There is a still of the group of Simian Policemen and the Warlord closely resembles one of them in particular. There is a definite similarity to the Dr. Who character also, more of a style thing than a close copy. I think the artist has produced a hybrid.
Well, we've came to the end. Wednesdays will be crap from now on. Surely nothing can take the place of Tomb of the Trumps. Cheers, Mr.Moon and Mr? ST. CLAIRE.

An excellent way to cap off the most intensive investigation of the HTT ever made! Well done Mr Moon.
I'm at work so dont have access to my notes, but I found several images of a Japanese Planet Of The Apes type show with some miltary type apes ( I think I googled "APEMEN WEARING 18TH CENTURY GREATCOATS") but as is common with my decidedly amateur sleuthing, the dates dont match up being almost a decade out.
But, I will say this. Zetan Warlord is definitely the most striking of the cards. Show it to the uninitiated and the may well find it to be almost familiar. Why is this?
I believe there is a seriously strong similarity to the famous Che Guevara image; perhaps only because of the portrait like rendering but possibly also in the unkempt greasy hair and beard. Once seen, it can never be unseen unfortunately..
Adieu to my fellow anonmymous commenter, it has been reassuring to know I am not the only one who has made daydreaming about the deck their lifeswork. Perhaps I'll one day see you wearing your faded print t-shirt of a mystery ape-oloid silhouetted against a violent Zetan Sky.
And to Mr Moon, I'll be following your toad blog with great interest.
A Zetan Sky to you all.
ST.CLAIRE

Hi Jim, I've thoroughly enjoyed this series from the golden age of marker pens, and how your incredibly thorough research has almost always turned up...err, trumps.
I don't doubt you've nailed this last set, but I have to mention that the Zetan Warlord also reminds me of a character from a film I know is close to your heart, the Sagoth leader from At the Earth's Core
http://non-aliencreatures.wikia.com/wiki/Sagoth
I'm sure I'm off-beam, but that image especially is uncannily similar.

Thanks again for all your sleuthing!

Both packs were re-released last year but i was unaware of this until last weekend when i discovered them in a shop. Never saw that coming, but to say I'm as pleased as punch is an understatement!

I know.
The jailer is out of frankenstien. Boris karlff.
The hangman is lon chaney. Phantom of opera..
Ive seen the ghoul. Again b&w movie but it was yrs ago..
Cyclops is defo ray harryhusen..

I guess if your a massive b&w horror movie buff. Youd get loads!!..