Hello folks! Welcome once again to that lurid den of artistic iniquity that is Tomb of the Trumps! We are currently still trapped within the letter G of the Dracula pack, and it's fair to say things have gotten a little weird around here! And if you thought last episode's tuxedo sporting Godzilla was bizarre, you ain't seen nothing yet! 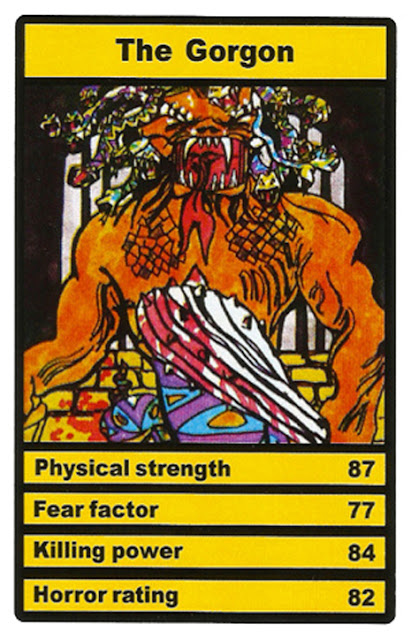 Dearie dearie me! What on earth is going on here? Yes, we've hit my nomination for Worst Card in either of the old Horror Top Trumps decks! And that's nothing to do with the stats either - although they are pretty mediocre generally. No, for me this earns the title of Worst Card thanks to the dreadful artistic execution. Now it is true that the simple lines and colours of these cards excited many a kid's imagination, not just for the lurid hues and ghoulish gore, but also because they were drawn in a style that was easy to emulate with the contents of the average pencil case. However the Gorgon sadly tips over the line and actually looks like a child's drawing. While many of these old Horror Top Trumps were the stuff of nightmares, this on the other hand looks like the artist was having an absolute 'mare drawing it!

But where did this demented vision spring from? Well of course, gorgons are a staple of Greek mythology and as one of the oldest famous monsters in the world they have turned up in a few movies over the years. However the artistic horror on this card resembles none of the Classical gorgon's cinematic outings. It certainly isn't remotely like the Gorgon conjured up by Hammer in their classic 1964 movie, and while some top trumpologists reckon this card was inspired by 1981's Clash of the Titans there are a couple of problems with that theory. For while this Top Trumps Gorgon has a snakey lower half like the Medusa in that movie, I'm not entirely sure that the film was actually out when these decks were being created. Of course, secondly and more importantly, the abomination above looks feck all like the late great Ray Harryhausen's wonderful creature.

However there was something naggingly familiar about this card, and eventually I remembered what it reminded me of - this poster for an old HP Lovecraft adaptation! 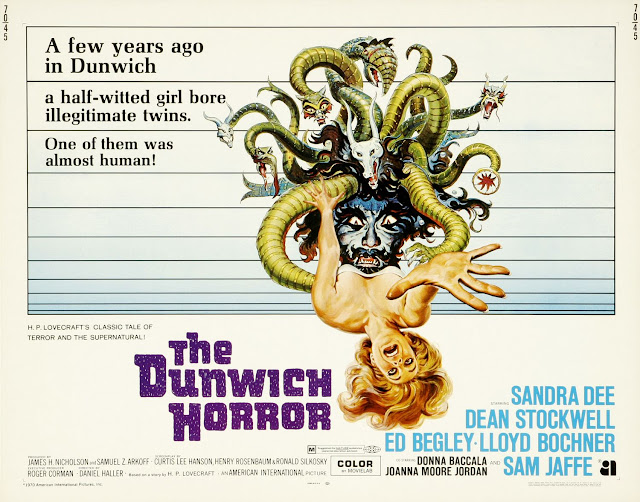 Now you may well think that there is just a superficial resemblance but look closer! We have the same triangular eyes and beast-like visage, and while the snake hair has been pushed down the sides, there some similarities in the monstrous barnet (although thanks to the crude rendition it is hard to tell).

Much like Thor in the last deck, here we have the demented Unknown Artist seemingly having trouble getting the image to fit into the dimensions of the card and ending up squashing the image to get it in. Furthermore, learned visitors of the Tomb of the Trumps, it is my contention that the burly body of the Gorgon on the card is in fact nothing more than the torso of the nudie lady on the poster turned upside with some inexpertly rendered scales bunged on!  Certainly that would explain a) the weird body and b) why our Unknown Artist has chosen to keep the hands off camera!

Anyhow, moving swiftly on from that horror, let's go from one of the worst cards to one of the blandest! # 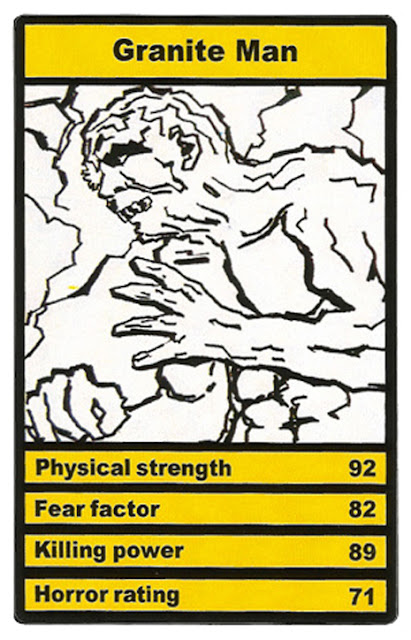 Ah poor old Granite Man! Despite having some decent scores, he was beloved by exactly no one, and on reflection a Horror Rating of 71 seems distinctly generous when most kids just wondered who the hell he was. Was he a poor cousin of Marvel superheroes like Ice Man? Could be! Or perhaps a mate of Spidey's foe Sandman? That seemed likely! Was he extremely dull? Yes!

Now on the face of it, old Granite Man does seem like the makers were really struggling to fill this second deck and knocked this up so quickly the artist didn't even bother to colour it in. However it may surprise you to know that actually this card wasn't just a quick sketch slapped on a card! In fact Granite Man is this chap! 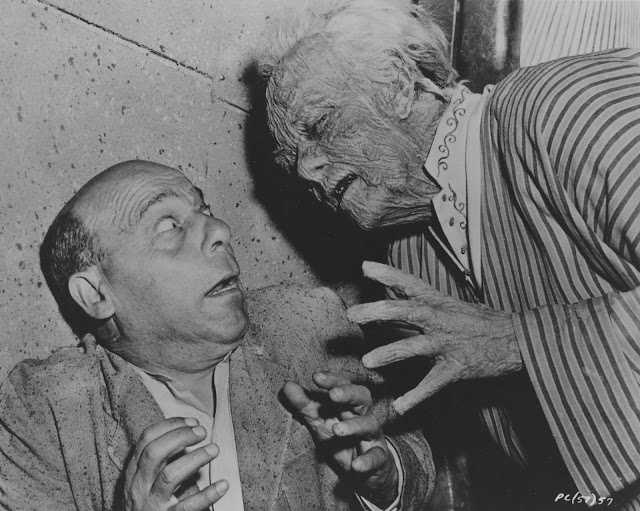 Now that still shows the main monster from a little known 1957 horror flick entitled Pharoah's Curse. In this movie, explorers excavate an ancient Egyptian tomb and one of their number, a young chap played by Alvaro Guillot becomes possessed by the spirit of an ancient mummy. But as well as going on the expected murderous rampage, he develops a taste for blood drinking, but also he begins to age at an accelerated rate until he resembles the old geezer in his pajamas shown above. But of course his more lasting legacy was providing the template for Granite Man... However now I know where the rocky chap came from we now have the trickier dilemma of deciding whether it was a good or bad thing that the deranged Unknown Artist of the trumps left off his jim-jims...

Next time, thankfully, we are on firmer ground once more...

Not from the top drawer of Horror Top Trumps, certainly. Considering the varying quality of the artwork, I think its possible that more than one artist had a hand in the cards.
See you next Wednesday...

Now, I do this cautiously after the amazing faux pas with my Amazon Women On The Moon fuck-up last week, but... I have seen a black and white still of a beast that looks very like the Trump Gorgon. It has curved rams horns instead of snakes on its head, but the face is very similar. Could he be from a 1960s Italian sword and sorcery film, I wonder? Has anyone else seen this still? The beast appears to be standing outside a cave or temple like structure.
Can the fellow who "corrected" me last week come to my aid again?
ST.CLAIRE

Every aspect of the HTT gorgon is simply too outrageous to have any basis in film or elsewhere. Celluloid outings for Gorgons are rare and the creatures far more subtle. Our example looks like a Scooby Doo villain.
Our blogger is doing exceptionally well with this series, even identifying victims and secondary aspects of the cards. Excellent work.
I wonder if the artist/s and designers of Horror Top Trumps will ever be identified.