Welcomes guys and ghouls to the tatty old Tomb of the Trumps! Once again we are investigating the sources and inspirations for the now legendarily lurid original decks of Horror Top Trumps, and this week we appear to have a special déjà vu edition! Allow me to explain... 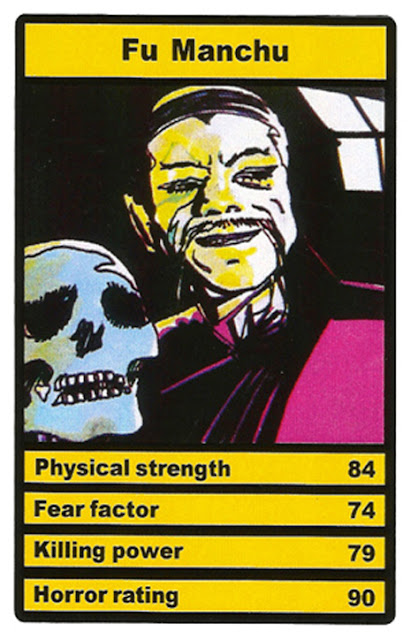 So then, here we have a famous villain who needs no introduction - Sax Rohmer's master criminal Fu Manchu!  And this likeness is very obvious based on a publicity still from 1932's Mask of Fu Manchu, where the evil mastermind was played by the great Boris Karloff. 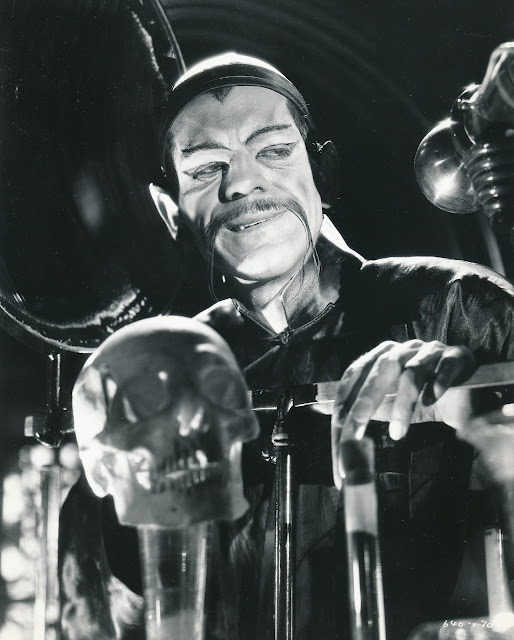 This was the only time Karloff the Uncanny played Rohmer's fiend in human form, and is widely considered the best of the Fu Manchu movies produced in the 1930s. However this is not the first time we have encountered the Devil Doctor in these packs of cards... For in the preceding deck, we had a card entitled Dr Syn, which as we discovered here was actually the man who inherited Boris' mantle as the big screen Fu Manchu - Sir Christopher Lee in one of the 1960s outings for the Lord of the Strange Deaths!

And oddly enough, the next card in our deck features a return appearance too... 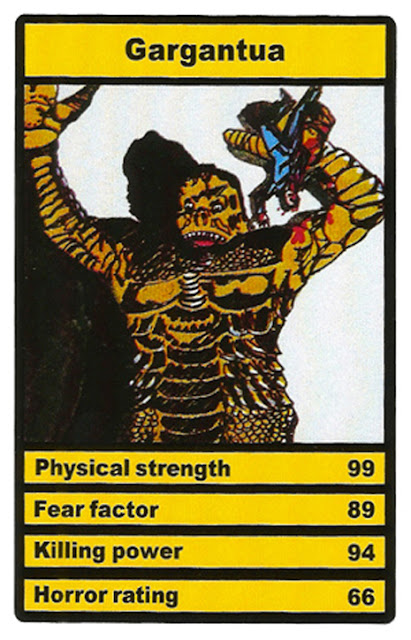 Now at first glance this appears to be one of those curiously rare cards - one with the right title showing the right monster! For in 1966, Toho, the home of Godzilla and all his suitamation chums, delivered a kaiju double-header in the form of War of the Gargantuas. Now weirdly enough, this flick is actually one of the more obscure movies in the canon of Frankenstein films... Allow me to quickly explain... 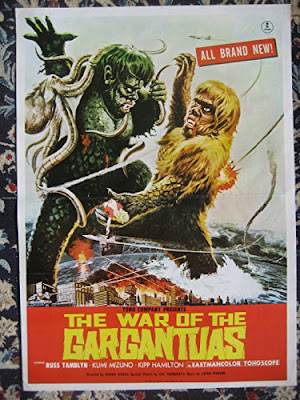 Long story short time - when Toho got the rights to use King Kong in their movies, they also acquired the rights to another property developed by Kong's creator Willis O'Brien, namely the treatment for a movie in which the mighty ape was pitted against Frankenstein's monster. Toho loved the idea - and originally planned to replace Kong with Godzilla. But in the end, they not to add this to the Godzilla saga, deciding that King vs the Big G was a better bet. However the idea was still appealing, and so they jettisoned Kong from the concept as well, and thus Frankenstein Conquers the World (1965) was born.

Now in this movie (as in the original treatment from O'Brien and screenwriter Richard Beck) thanks to the usual mad science involving radiation, the still beating heart of the original Frankenstein monster grows into a feral boy who won't stop growing, and eventually becomes a skyscraping caveman-like kaiju who wreaks havoc in the usual fashion. But as often is the case in these kind of movies, the kaiju Frankenstein ends up becoming the good guy (sort of) by whaling on another giant-size miscreant, in this case the hastily created Godzilla stand-in, Baragon. The movie ends with both monsters fall into a deep chasm.

But of course, Toho could never let a good monster lie, and so the following year we got Frankenstein's Monsters: Sanda versus Gaira, which was renamed War of the Gargantuas in the West. In this movie, we learn that cells from the Frankenstein kaiju have mutated into two new monsters, one nice and one nasty. Needless to say, they end having lovely picnics together.... no, only joking! Of course, they end up causing massive property damage and having a massive punch up.

So with that background info out of the way, back to the card! Yes, at first glance we have a kaiju sized beast and a kaiju name, so we is done here then! But wait! Of course, nothing is that simple in the Tomb of the Trumps! The major issue here is that the beastie shown doesn't really resemble either Sanda or Gaira: it's missing a Beatle mop top for a start, and where's the Gallagher brothers style mono-brow?

No, this so-called Gargantua is actually the monster from Mars featured in  It! The Terror From Beyond Space (1958) - see for yourselves! 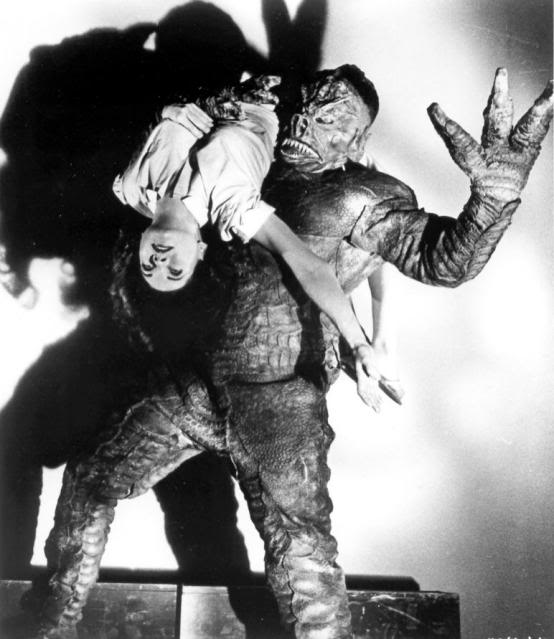 And this isn't first time this interstellar hooligan has made a crafty appearance in the old Horror Top Trumps! Previously we discovered him masquerading as "Lizard Man" (see here for details). Evidently this fella was a big favourite with the Unknown Artist! Whereas another famous monster he appears to have had something of a vendetta against... But more about that next time!

You're way ahead of me, of course (as I while away the future coronavirus lockdown) - I thought Fu Manchu might have been from Dr Whoo too... but you're spot on.