And welcome back to the the Tomb of the Trumps! Today we are cracking open the second horror themed deck issued by Top Trumps back in their heyday! Commonly known to collectors and trumpologists as the Dracula pack, let's have look at the first couple of cards! 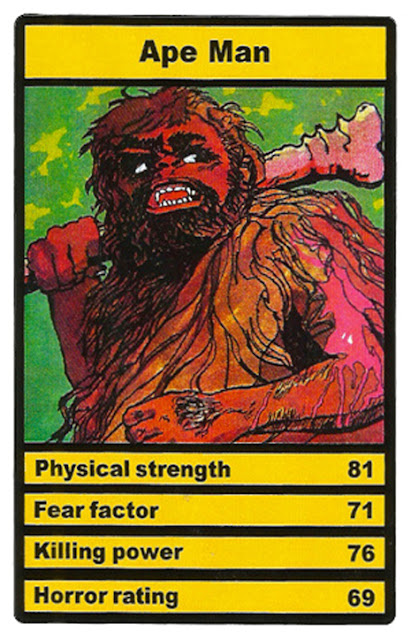 So then, what do we have here then? A tribute to an old Kinks song perhaps? Sadly not... although a movie inspired by Ape Man would be pretty cool. However, believe it or not, the truth is far stranger! Oddly enough the inspiration for this Stone Age horror would appear to be an old Joan Crawford movie - admittedly the last one she made, but a Joan Crawford picture nonetheless.

This movie was Trog - a 1970 British production, which was originally developed for cult Brit horror studio Tigon, the folks who gave us classics such as Witchfinder General, Blood on Satan's Claw and The Creeping Flesh. However this SF horror, directed by Hammer stalwart Freddie Francis, would eventually be made by Herman Cohen, an American producer who had been the driving force behind classic B movies such as I Was A Teenage Frankenstein and I was A Teenage Werewolf in the 1950s for AIP. The movie boasted further notable horror connections too, being co-scripted by John Gilling who made Plague of the Zombies and The Reptile for Hammer, and co-starring with Crawford was genre regular Michael Gough. 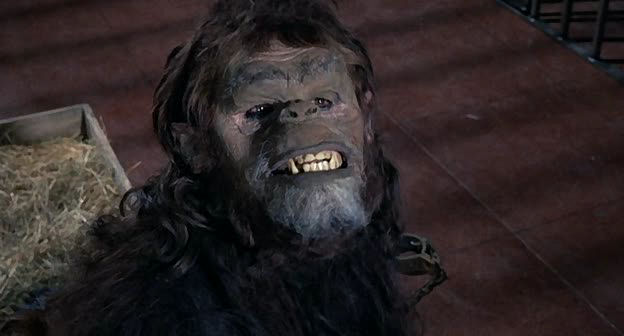 The plot of the movie tells the tale of one Doctor Brockton, played by Joan Crawford, who discovers a prehistoric proto-human, living in some caves in the heart of the English countryside. She captures the creature, which is identified as a troglodyte, and hence the strange simian survival is named Trog for short. The good doctor studies the caveman and attempts to teach him some modern human manners and how to speak. However local businessman Sam Murdoch (played by Michael Gough) isn't terribly happy about the situation, and the conflict between the two will lead to Trog escaping and having a bit of a rampage... Well, as much as the budget would allow...

However despite an impressive pedigree, Trog did not join the ranks of the classics mentioned above. Rather it went to the other end of the table, and is now often recognised as a gem of a different kind in the murky world of so-bad-its-good  movies... But hey, Trog made for a cool looking card!

So then, what do we have next? Well, we have this fellow, who is actually isn't quite what he first appears.... 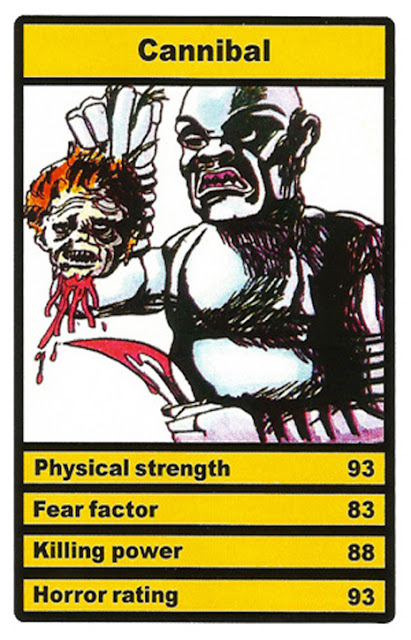 Now this vicious looking savage actually comes from The Phantom Creeps a 1939 serial from Universal. This tale, told in 12 episodes, sees government agents battling the sinister Dr. Zorka played by Bela Lugosi (in his last role in a movie serial). Doc Zorka is - of course with a name like Zorka -  a mad scientist possessing all kinds of super weapons, including an invisibility belt, robot spiders, and a fragment of meteorite capable of sending whole armies into suspended animation! But his star invention showcased in the serial was this creation, dubbed simply 'the Robot'! 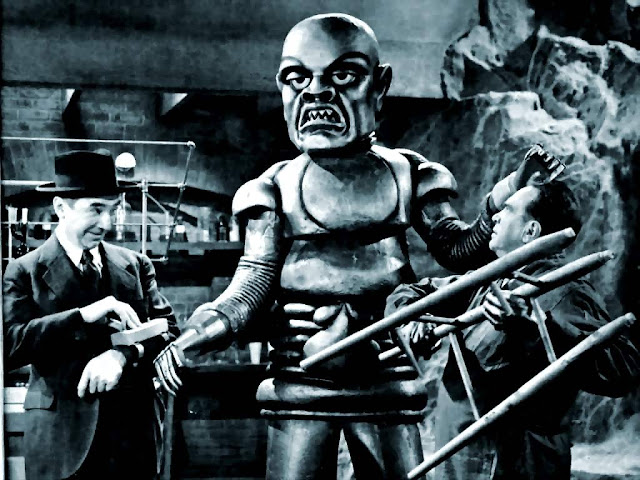 ...So yes, the Cannibal is actually a rather cool looking android! A cut above the usual tin box and TV aerials look that most early screen robots sport, I'm sure you'll agree! And speaking of design work, I particularly like the way that the fabled Unknown Artist has turned the flexi-tube sleeves of the Robot's arms into tribal war paint/tattoos for the Cannibal! Nice work fella!

However our work is not yet done here... For as regular readers will know, these old Horror Top Trumps often 'borrowed' from multiple sources, and hence I had the sneaking suspicion that I had seen that severed head before. Using my best detective skills, I noted that little bonce's wonky eyes, and this gave me the lead I needed... For there is one famous monster that usually sports off-kilter peepers - Quasimodo, the Hunchback of Notre Dame. And sure enough, this severed head bears an uncanny resemblance to one of the Hunchback's more obscure movie appearances - namely when he was played by the great James Cagney!

Now before you rush off to IMDB or dust off your tomes on horror movies, let me confirm that Cagney never actually appeared in a screen adaptation of Victor Hugo's famous novel. But Cagney did play the role of Lon Chaney Senior, in the 1957 biopic of that legendary actor Man of a Thousand Faces. And in that movie Cagney donned the latex to play Chaney shooting the classic 1923 silent version of The Hunchback of Notre Dame. Now the make-up job in Man of a Thousand Faces is actually significantly different to the Quasimodo created by Chaney, but it is a dead ringer for the blood dripping noggin on the Cannibal card! 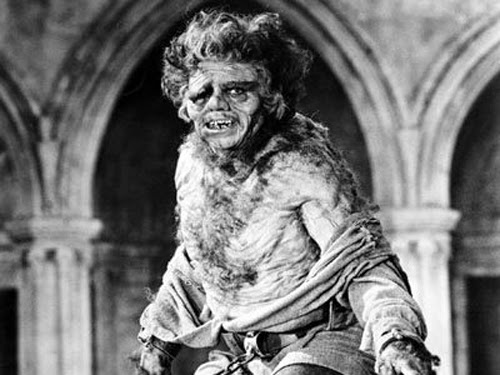 I'd love to see Cagney playing Quasimodo. Just imagine him telling the crowd, "I gave her sanctuary, you dirty rats." Or swinging from the cathedral parapets yelling, "Look at me, ma! Top of the world!"