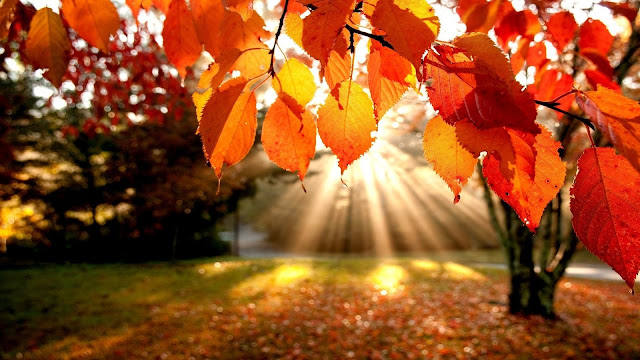 In 1939, noted poet Louis MacNeice wrote a long work entitled Autumn Journal, a snap shot in verse of life in London on the eve of the Second World War. MacNeice's poetry very much reflected the times he lived in, as Philip Larkin put it "his was the poetry of our everyday life, of shop-windows, traffic policemen, ice-cream soda, lawn-mowers, and an uneasy awareness of what the news-boys were shouting". However a few particular lines have often puzzled readers -
The plane-tree leaves come sidling down
(Catch my guineas, catch my guineas)
And the sun caresses Camden Town,
The barrels of oranges and apples.


Many have thought that the odd refrain of "Catch my guineas, catch my guineas" is perhaps meant to echo of an old nursery rhyme, just as the following lines about oranges and apples recall "Oranges and lemons say the bells of St Clements". However, while it does allude to a very old source, we must look a little further than the nursery for its inspiration.

While these lines don't appear to be an allusion to any older traditional rhyme or verse, it would seem to be an allusion to a widespread folk belief about falling leaves, and one that many generations of children have been familiar with. In Copsford (1952), author WJC Murray recalled that -

Now this is somewhat vague, but undoubtedly it does make for a fun game in a sunny autumn afternoon. Delving into the annals of folklore, I discovered that in Cheshire it was said that to catch a falling leaf before it hit the ground on Halloween night entitled the catcher to make a wish. However there are many other versions of this little piece of autumnal lore. Most commonly, in many areas, it is simply considered lucky to catch a falling autumn leaf, and certainly this was the version that I was familiar with as a child growing up in the 1970s in the North of England. It is therefore not a huge leap of logic to suggest that Mr MacNeice's refrain recalls a similar tradition, in which it was said that to catch a falling leaf would ensure money and good fortune, and seemingly recalls a forgotten chant that accompanied the leaf catching.

In 1878, the Folklore Society was founded to study such matters, and indeed to preserve these kinds of traditions, songs and rhymes. And in their first year of operations their official journal records the common folk belief that -

If you catch a falling leaf, you will have twelve months of the happiness


But not all versions of this tradition were as quite as generous. It was said in Northampton, as late as the 1980s, that  if you catch twelve falling leaves during the autumn, you'll have a happy year; presumably each leaf caught ensures one month of good fortune. However childrens' author Alison Uttley, in her memoir A Year in the Country (1957), recalls a more exacting version -

We try to catch a dancing leaf, for every leaf caught is a 'happy day', but how elusive they are, these fluttering alive things, which slip through the fingers and evade pursuit!

Now these variations in number perhaps are the result of this superstition spawning a game for children, with the increased goals making this autumnal activity something more of a challenge. In the 1950s, folklorist Iona Opie conducted a nationwide survey on superstitions, and a Welsh schoolboy in Bucknell, Radnorshire informed her that one needed to catch a whopping 365 falling leaves to ensure a lucky year - one can almost hear his breathless excitement at undertaking such a challenge!

However the catching of falling leaves had other variations, and what's more were popular with grown-ups too. In The Encyclopedia of Superstitions (1949), Edwin Radford reports -


The peculiar belief mentioned in the first of the above superstitions was forcibly brought to the mind of the author one day in Hyde Park, London, in the autumn of 1946. A man and woman pretty well advanced in years stood looking up at an oak tree from which leaves were being blown by the wind. After making several attempts to catch a leaf, they at last managed to do so, the man first and the lady subsequently. They then walked away, apparently satisfied with the game.

A question to them elicited the fact that they expected to be free from colds in the head by reason of their performance. The author quoted to them the superstition in which they apparently believed. To this and a further question they announced that they were country bred, from the shires, and that since coming to London more than 20 years ago they had regularly caught falling leaves in the autumn. 'And we've never had a cold yet,' they concluded.

Whether there is any truth to this I do not know, but certainly the exercise involved in the task of catching those tricksy falling leaves certainly will help in warding off the coughs and colds of winter! 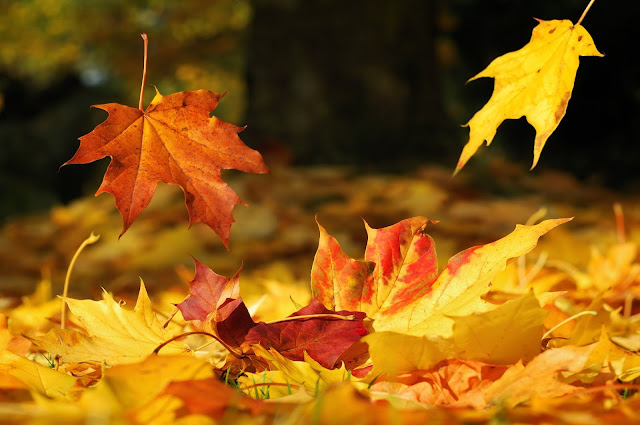 It came to me one morning that autumn leaves with their golden colors are there to remind us of a golden place in nature and our mind. We do share similar views on autumn leaves !