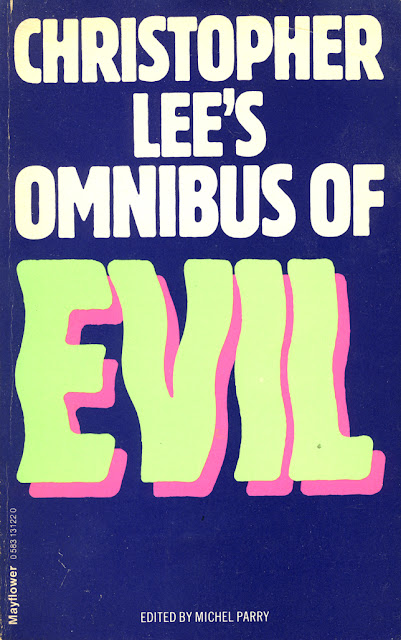 I know, I know! That is one of the worst covers you're ever likely to see... And no, I'm not getting my columns mixed up and this isn't a stray from Cover Art-rocities. As it happens, when this tome was originally published in hardback by WH Allen back in 1978, it had a rather nice dust-jacket showing  a sinister top hatted and cloaked figure stalking a Victorian street by moonlight. And it also had the catchier title Christopher Lee's Great Villains, with Omnibus of Evil being relegated to a mere subtitle.


However when it surfaced in paperback from Mayflower in 1980, for some reason some maniac in the Art Department decided that the most terrifying thing in the world would be wobbly letters and day-glo colours. Actually on the latter they may have had a point, but I digress... However in fairness, I think its a fitting tribute to the late Sir Chris that the publishers felt his name alone was a big enough draw to lure readers in.

And indeed Lee was no stranger to the role of anthology host either. Great Villains was actually his fifth foray in fronting collections of weird tales. The first came back in 1966 when Lee lent his name to paperback collection of comic strip adaptations of classic macabre tales, Christopher Lee's Treasure of Terror (Pyramid Books 1966), a handsome little volume produced by the talent ghouls at Warren who gave the world marvelous horror comics such as Creepy, Eerie and Vampirella. In 1974 he teamed up with legendary editor Peter Haining, to give us Christopher Lee's New Chamber of Horrors (Souvenir 1974)* which featured his favourite horror tales as well as some writing on his career in horror movies and a selection of photographs from Lee's private collection.

The mid-Seventies saw three further volumes hosted by Sir Chris, now working with another legend of the horror anthology game Mr Micheal Parry. Christopher Lee's X Certificate (Star Books 1975) collected tales related to roles Lee had played on the screen, while Christopher Lee's Archives of Evil (Mayflower 1977) featured a selection of stories exploring different type of horror monsters. And Great Villains was the last of these collaborations, with as I'm sure you'll have guessed, a menu of macabre tales about some of the great fiends of literature.  The full rogues gallery is listed below -


Now obviously, lovers of fantastic fiction will be very familiar with half the contents of this volume, the extracts from the classics and oft-anthologies works like Carmilla, The Final Problem and the account of Sawney Beane. But overlapping tales is a common feature in any anthology, and what makes the difference is the choice of unfamiliar material, and fortunately here we have some crackers. Ray Russell's Sagittarius  is an excellent story that serves as a sequel to Stevenson's original, while Harry Harrison has a lot of fun with the Frankenstein legend, with the Doctor and his monster turning up in a carnival show in Florida, and telling a young reporter what he's been up too all these years. In The Demon King, JB Priestley may well have his tongue in his cheek but still delivers a top notch tale.

The Skull Of the Marquis de Sade is one of my favourite tales from Robert Bloch, and even inspired an Amicus movie The Skull starring Lee and Peter Cushing (which I chat about at length here). However the real treat here is In The Fourth Ward by Theodora Benson, a story I have found nowhere else, that seemingly sees old Saucy Jack bringing bloody mayhem to old New York. And as related in the introduction, this tale is based on an actual theory as to what happened to Jack the Ripper, and the macabre events recounted were drawn from a real murder case.

And speaking of the introduction and linking material, often in the case of these hosted anthologies, the titular big name in question often just pockets a handsome fee and allows the real editor to ghost write the necessary blurbs. However in this case, it would appear that Sir Chris, being the consummate professional he was, would not brook such literary chicanery, for one can not only clearly hear his distinctive speaking style in the text pieces, but also those of us who have heard the great man in interviews over the years will recognize some of the observances and anecdotes he relates while talking about the stories and the roles he played relating to these great villains.

It's a refreshing change for the hosted anthology genre, and makes this book a double delight. Not only do you get a fine selection of tales but get to hang out with Lee himself for while. Well worth hunting down for all fans of classic horror, but I would recommend trying to find the hardback with the nicer cover...