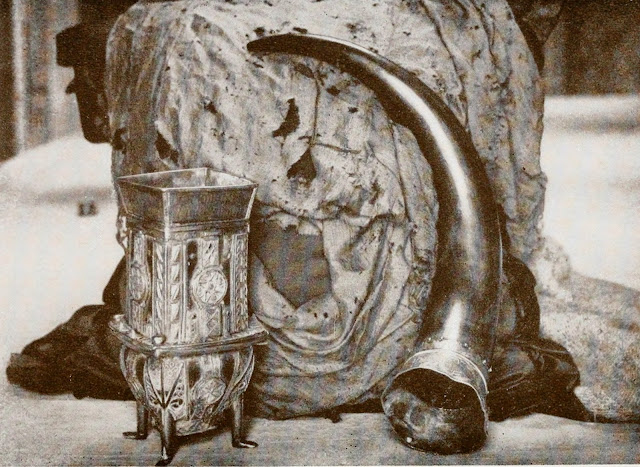 In 1772, the noted Welsh naturalist and antiquarian Thomas Pennant went on a tour of Scotland, visiting all manner of places in that fair country. However while on the Isle of Skye he dropped in at Dunvegan Castle, ancestral home of the McLeod clan and there he was shown a curious artifact, that coincidentally linked to his own name; an ancient flag with a strange history which Mr Pennant carefully recorded for us:


Here is preserved the Braolauch shi, or fairy flag of the family, bestowed on it by Titania the Ben-shi, or wife to Oberon king of the fairies. She blessed it at the some time with powers of the first importance, which were to be exerted on only three occasions: but on the last, after the end was obtained, an invisible Being is to arrive and off standard and standard bearer, never more to be seen.

A family of Clan y Faitter had this dangerous office, and held by it, free lands in Bracadale. The flag has been produced thrice. the first time in an unequal engagement against the Clan-Roland, to whose fight the Macleods were multiplied ten-fold. The second preserved the heir of the family, being then produced to save the longings of the lady:  and the third time, to save my own; but it was so tattered, that Titania did not seen to think it worth sending for.

And thus the world came to know the legend of the Fairy Flag of the McLeods. A few decades later, at the close of the 18th century, Norman McLeod described the flag as "a piece of very rich silk, with crosses wrought on it with gold thread, and several elf spots stitched with great care on different parts of it", but now the colours are so faded the darned gold crosses and elf spots are barely visible. But the antique banner was carefully preserved, and indeed is still displayed in the Drawing Room of Dunvegan Castle. 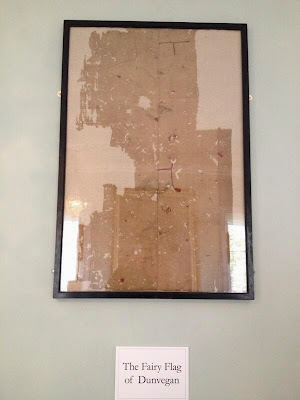 Since Thomas Pennant's visit to Skye, numerous legends have emerged about the flag's origins, if you'll pardon the pun, embroidering Pennant's concise account. While several of these tales recorded in the 19th century claim to be based in older traditions, we obviously cannot rule out that some were not actually genuine folklore but stories crafted to bolster the relic's status and indeed play into the Victorian fascination with faeries. The excellent Faerie Folklorist has an excellent article here collecting and dating the various tales that have appeared down the years that describe how the McLeods received this gift from the Fair Folk.

And over the years the flag was ascribed more powers too, with Sir Walter Scott recording that it was said to have the power to cure cattle of illness, bring fertility when spread out on a lady's bed, and also brought herring to the nearby loch. It is also said that the flag magically extinguished a fire in Dunvegan Caste in 1938, and that during the Second World War, the 28th chief of McLeods, Dame Flora McLeod offered to unfurl it on the White Cliffs of Dover to defeat Hitler!


But where did the flag actually come from? Mr Pennant theorised that it might date back to Viking times, noting the strong influence of the Norse in Scotland and drawing parallels to Scandinavia legends of heroes carrying magic banners. And while this was a fine hypothesis, modern science however indicates a different origin - when the flag was examined by experts from the Victoria and Albert Museum in the early 20th century, it was concluded that the flag was made out of silk from either Syria or Rhodes. And as the Mcleods can trace their lineage back to one Harald Hardarada, a Norwegian king who spent fifteen years in exile as a mercenary in the Byzantine Empire, we therefore have here a likely first owner. Interestingly further expert analysis has suggested that the silk was probably manufactured in the Middle East but between the 4th and 7th centuries - in other words several centuries before the First Crusade. This means that  the decorated silk was already an ancient relic even in the days of Harald Hardrada, and hence a worthy prize to carry off from the Holy Lands.


So then like the Luck Of Edenhall, here we have an artifact most likely brought back from the Near East gaining a fairy origin when the real history was forgotten. Or rather almost forgotten, for one of the earliest tales of the flag's mysterious origins does have a McLeod getting the magical banner in the East - writing in Notes on the Relics preserved in Dunvegan Castle, Skye, F Macleod recounts a tale found in a manuscript dating from 1800 -

The legend of its origin is that a MacLeod who had gone on a Crusade to the Holy Land when returning home in the garb of a pilgrim was benighted on the borders of Palestine in a wild and dangerous mountain pass, where by chance he met a hermit who gave him food and shelter. The hermit told him that an evil spirit guarded the pass and never failed to destroy the true believer; but by the aid of a piece of the true Cross and certain other directions given by the hermit this MacLeod vanquished and slew the 'She Devil' called Nein a Phaipen, or Daughter of Thunder, around whose loins this banner had been tied; and that in reward for conveying certain secrets which she wished some earthly friends to know she revealed the future destinies of the Claim to her conqueror, in whose family this knowledge was supported to be deposited to its final extinction, and desired that her girdle should be converted into this banner, which was to be attached to her spear, which became the staff which is now lost. The secrets were never known and are likely to remain unknown forever, although many editions have been recited.

So far as I can uncover, there is no established mythology or folklore relating to the Daughters of Thunder, and so must conclude that this was merely a title given to this alleged "evil spirit". And to make some further educated guesses, the fact that she delivers prophecies to our McLeod in return to carrying messages to her friends, rather suggests that this "evil spirit" was more likely a local wise woman or witch rather than a supernatural being. But given that she was alleged to guard a certain mountain pass through which pilgrims traveled, there are some explanations for why Nein a Phaipen had gained a bad reputation.

It is possible that she had some kind of shrine or retreat there, and could have been dubbed a 'She Devil' for either holding beliefs or worship that were deemed heretical, or even just taking tolls or tithes from passing pilgrims without the local clergy's sanction. Equally plausible in the times of the Crusades is the possibility taht she was operating as a bandit preying on those passing travelers. Pilgrimages were a hazardous business, with the faithful being easy pickings for outlaws and brigands, and indeed many a fortune were made offering armed escorts and protection to parties of pilgrims.

Weighing up the possibilities, I would suggest that the legend above has more than a grain of truth in it. And it seems very likely that the flag began life as a trophy taken from some mountain recluse, possibly originally given freely as payment for passing on messages, or looted from a shrine or robbers' horde. However as stories about the adventures of Crusaders and pilgrims began to fade in the public imagination, and tales romancing the landscape and history of the British Isles, particularly the Celtic legends and English faery lore became more popular, the flag gained an origin both closer to home and more rooted in the Otherworld. 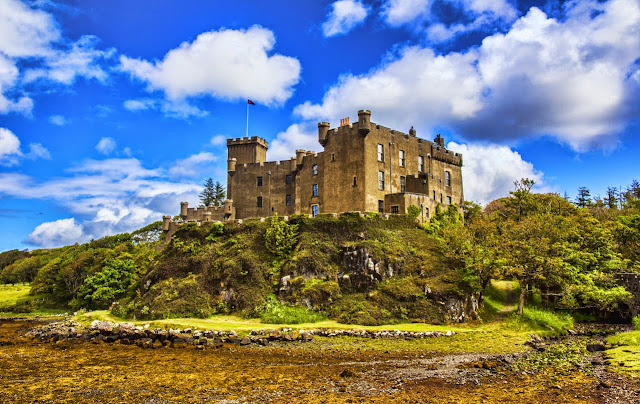 The real history of the flag is almost more interesting than the Victorian one!