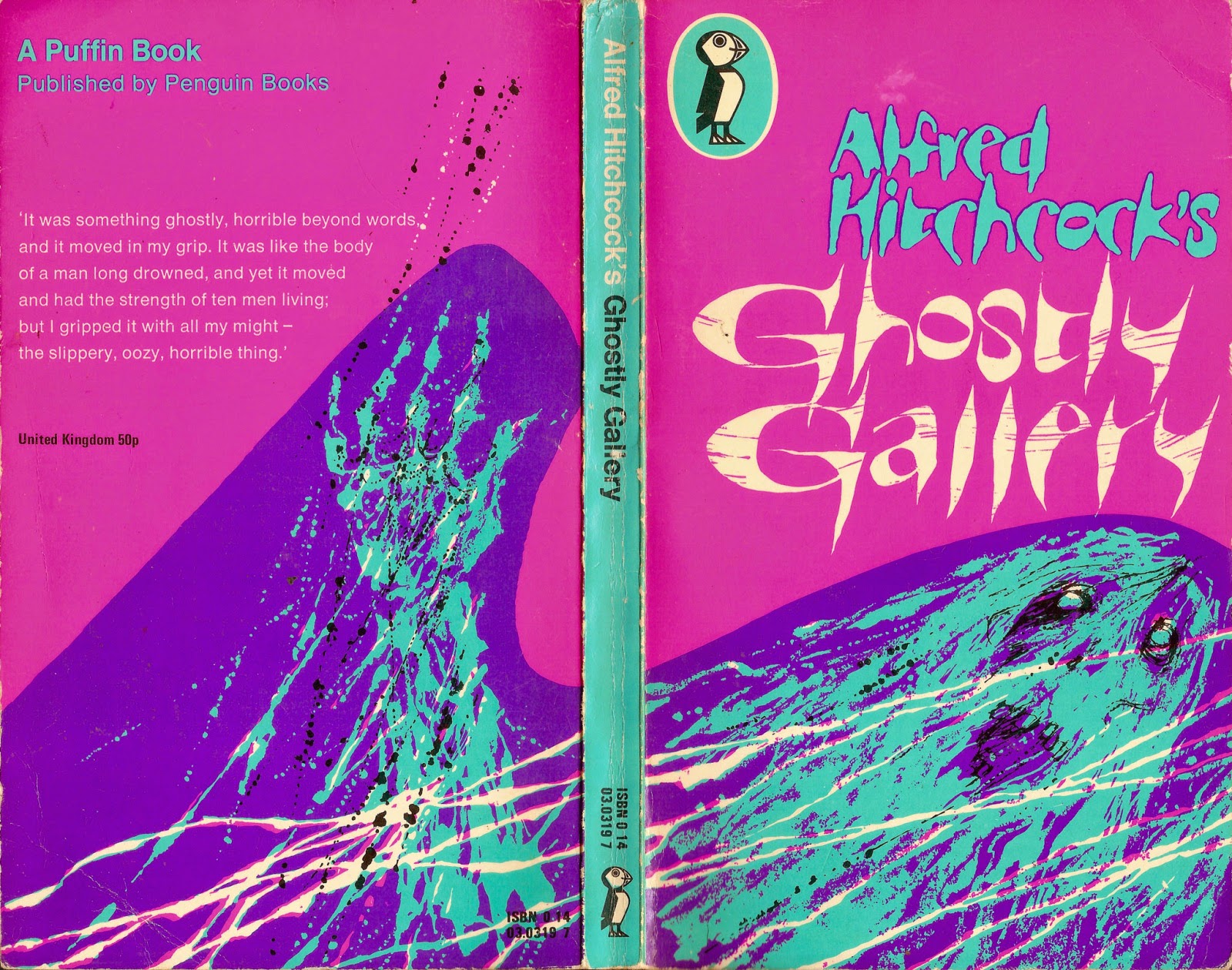 Another VIT (Very Important Tome) for me - for this was the first book of ghost stories that I ever bought. My memory is a little hazy on this but I think that this paperback may well have been the first book of proper ghost stories that I ever read too. It was first published back in 1962 in the USA, and received a UK publication in 1966. Judging from the information in the publisher's blurb page, this anthology was something of a best seller being reprinted in paperback every year, with two print runs in 1972 and 1974, and I recall it making regular appearances in bookshops for a good few years after I got my copy in 1976.

So then, what made me pick up this tome? Well it wasn't so much the stylized and oh-so-very-very-'70s cover, but the killer combination of the shuddersome quote on the back (from a tale within "The Upper Berth" by F. Marion Crawford fact fans!) and the name of Alfred Hitchcock that convinced me that this was the right book for my purposes. Even at the age of seven, I knew Hitch was a master of terror, despite having never seen one of his movies, and in conjunction with that backcover quote, it was reasonable to assume that a book from a famous director of scary movies would guarantee that this paperback would be the real deal, delivering some properly scary tales of spooks and spectres.

And why was that so important to me back then? Well, at that time there was craze in my school for telling each other ghost and horror stories and trying the scare the life out of each other. Therefore, with impeccable childhood logic, I reasoned that a book of ghostly tales from Alfred Hitchcock would be far more frightening anything my classmates could cook up and therefore once I'd read this proper book of proper ghost stories, I couldn't be scared anymore. Plus I'd have some real skin-freezers to blow the competition out of the water with!

Of course what I didn't realise was that this collection, was but one of a legion of anthologies bearing the Hitchcock name being published back then, and that old Hitch actually had little to do with the selections. Indeed this volume, like several others was actually edited by Robert Arthur. However in fairness, Hitch did at least supply an introduction laced with his trademark black humour to this one.

Thankfully however, I was still in safe hands. Despite this selection of stories containing the seemingly obligatory whimsical and humourous tales that many anthologies of that era sported as standard, Mr Arthur had included some genuine classic chillers -

Introduction by Alfred Hitchcock
The Waxwork by AM Burrage
Miss Emmeline Takes Off by Walter Brooks
The Valley of the Beasts by Algernon Blackwood
The Haunted Trailer by Robert Arthur
The Upper Berth by F. Marion Crawford
The Wonderful Day by Robert Arthur
The Truth About Pyecraft by HG Wells
Housing Problem by Henry Kuttner
In A Dim Room by Lord Dunsany
Obstinate Uncle Otis by Robert Arthur
The Isle of Voices by Robert Louis Stevenson

Of course, the keen-eyed among you will have also noticed that Mr Arthur has somewhat abused his editorial privileges. Normally in anthologies, it considered acceptable for the editor, if he is an author also, to include a tale of his own. However to put in three, and not even disguise the extra tales with pseudonyms, is a wee bit cheeky! Fortunately however Mr Arthur was a decent writer in his own right and his tales are highly entertaining - indeed it was actually Robert Arthur who created the Alfred Hitchcock's The Three Investigators series of books, and penned the first nine spooky cases for the juvenile detective trio. But more about those fellows another day...