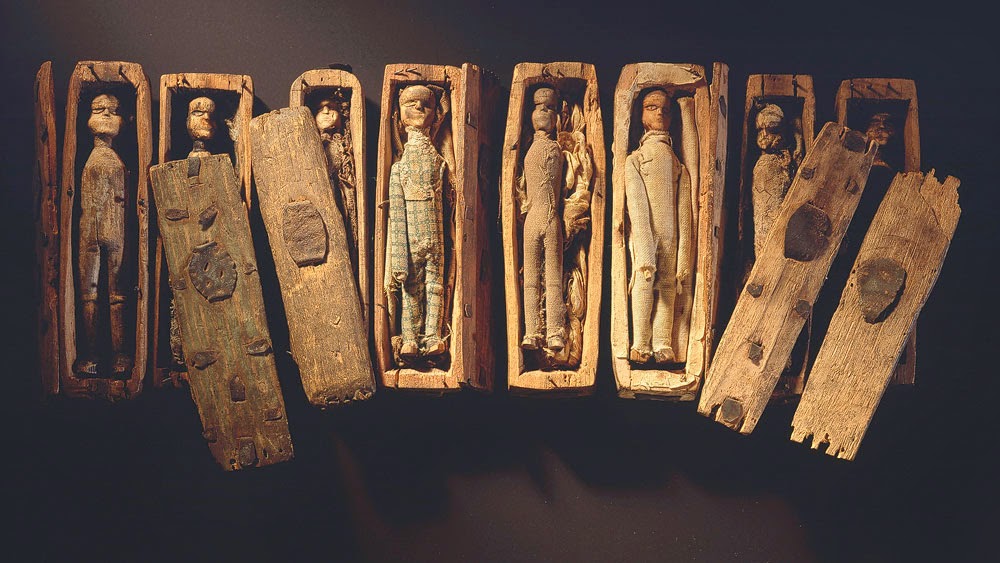 Just outside Edinburgh, and over-looking that fine Scottish city, is a huge hill, Arthur's Seat, the time-worn remains of an ancient extinct volcano. Like many notable places in these isles, it is named after the legendary King Arthur and has been proposed as the site of Camelot. And over the years, alongside providing spectacular views of the city, Arthur's Seat has accrued a fair amount of folklore. There are tales of visions, healing waters, stones that brings fertility, and witches' gatherings all associated with this towering mount. However perhaps the strangest tale of all is that of the Fairy Coffins discovered there.

In June 1836, a curious find was reported in the distinguished newspaper The Scotsman - some boys were larking about on the slopes of Arthur's Seat, looking for rabbits. While on their hunt, they noticed several sheets of slate wedged against the hillside, and on removing them discovered a tiny cave. And inside the little grotto were seventeen tiny coffins, containing wooden figures, roughly carved and about two to three inches long. But boys being boys, the careful processes and procedures of archaeology were roundly ignored and instead they made sport with the mysterious little figures. And sadly not all survived these shenanigans, with The Scotsman reporting that “a number were destroyed by the boys pelting them at each other as unmeaning and contemptible trifles.”

However some did make it down the mountain. The Scotsman describes them thus -


They were dressed from head to foot in cotton clothes, and decently laid out with a mimic representation of all the funereal trappings which usually form the last habiliments of the dead. The coffins are about three or four inches in length, regularly shaped, and cut out from a single piece of wood, with the exception of the lids, which are nailed down with wire sprigs or common brass pins. The lid and sides of each are profusely studded with ornaments, formed with small pieces of tin, and inserted in the wood with great care and regularity.

The coffins ended up displayed in a private museum owned by a South Andrews jeweller named Robert Frazier. In 1845 the contents of the museum were auctioned and the Fairy Coffins passed into the hands of private collectors. However in 1901 a lady named Christina Couper of Dumfriesshire generously gave a set of eight coffins to National Museum of Scotland where they have remained until this very day. 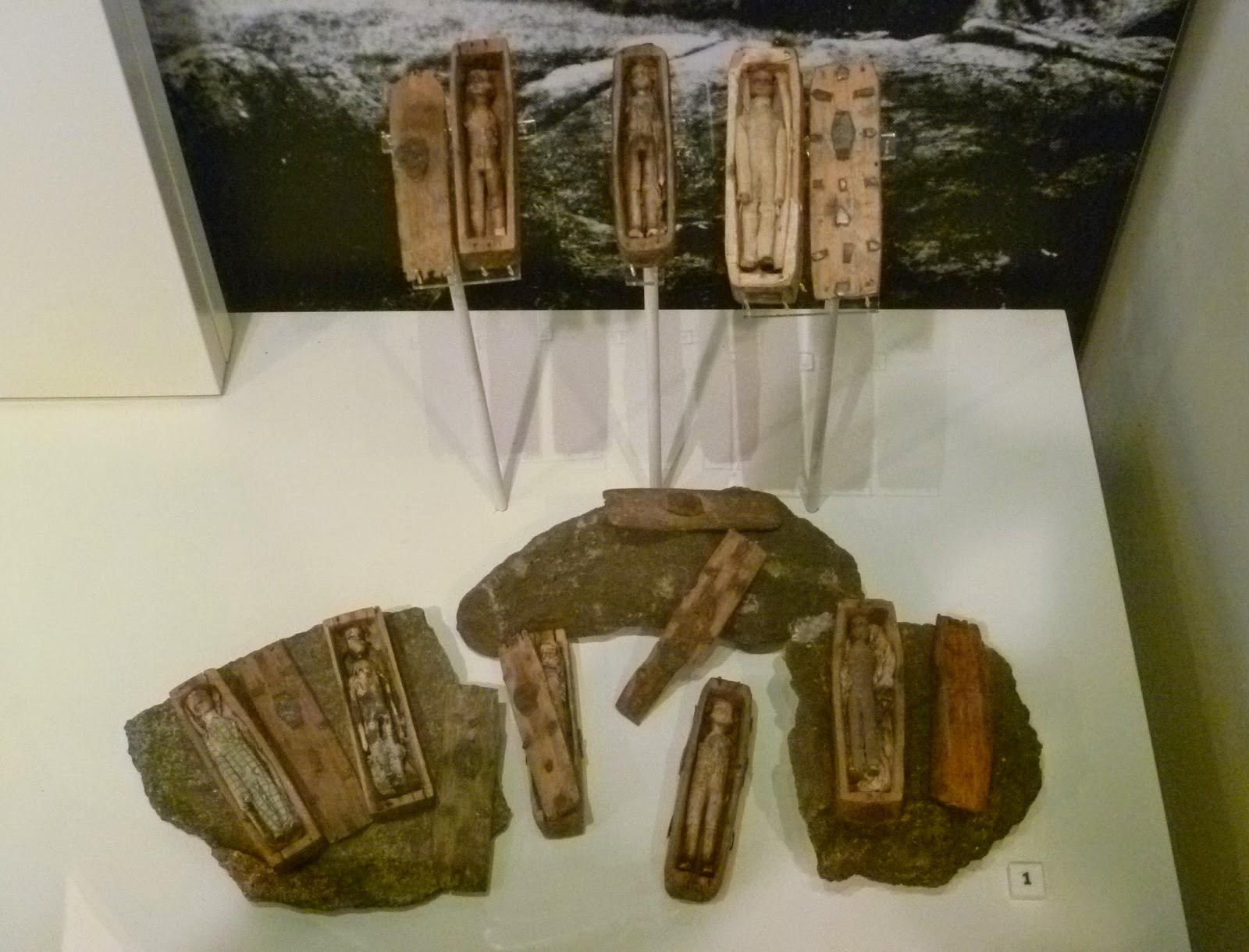 Now then we should first note that we cannot actually be sure that the eight Fairy Coffins we have on display today are the originals. While it seems very likely that they are, considering the nine day wonder that the original discovery prompted back in 1836, we cannot rule out that these may be replicas or even deliberate fakes made to sell to collectors of curiosities. Certainly ever since their discovery, the mystery of the Fairy Coffins has intrigued the public. Indeed over the years, more details of the find have been uncovered...

A Notes & Queries piece on the affair, titled "A Fairy Burial?", published on 4th April 1863, claims that the discovery was made at the foot of the Salisbury Crags on the north side of Arthur's Seat and had a dramatic account of the discovering with a mildly imperilled climbing lad accidentally dislodging the slate door of the tiny tomb while scrambling for a foothold. However another Edinburgh newspaper the Caledonian Mercury, in an article published on 5th August 1836, claims the find was made on the south side of the hill. Meanwhile, in its 'Continuation Catalogue' a scholarly journal, Proceedings of the Society of Antiquaries of Scotland #36 (1901-02),  furnishes us with the additional details that one of the slate stones covering the cave was “rudely shaped like the headstone of a grave” that revealed “an aperture about twelve inches square in which were lodged seventeen Lilliputian coffins, forming two tiers of eight each, and one on a third, just begun!”

And there were further revelations to come, for the Edinburgh Evening News in 1956 provided the most detailed account yet, which revealed that the exact date of the discovery was 25th June 1836, the dimensions of the cave were a foot in height and 18 inches wide, and that the surviving coffins we now have, were retrieved by the boys' teacher, a Mr Ferguson, and presumably it was through this schoolmaster that the Fairy Coffins made their way into both the newspapers and the hands of Mr Frazier.

Now it is important to note that none of these later accounts took to the trouble to do anything as useful as list any sources for these revelations. Therefore given the growing amount of details that have no historical documents to back them up, these later reports of the find may well be an example of a tale being embroidered with each retelling over the years. And therefore we must be careful, and pick away any rogue 'facts' from the bones of the case.

One recurring offender is the oft-repeated claim that the coffins had been placed there one by one over a period of years. In fact, we can sure of no such thing. This claim is based on reports that the lower tiers of coffins were decayed, and drawing on the possibly dubious claims that they were stacked in two piles of eight with a third seemingly just begun. Now it is true that looking at the eight surviving coffins we can see that some are more rotted than others. And indeed this could be a result of those particular coffins were the ones placed on the bottom tier and hence were more prone to decay and water damage. But while forensic analysis of the existing coffins has yielded some interesting results,  it is impossible to say if they were all interred at the same time.

It has also proved difficult to ascertain if the Fairy Coffins were made in a one batch or over a longer period of time. For example one coffin is lined with paper made with rag fibre, a process which dates it from a time after 1780. However the clothes of another has stitching with cotton thread - and cotton thread only replaced linen thread from 1812 onward. Other figures have two ply thread in their garments which again pushes forward the date of manufacture, while one has three ply thread that textile historians claim only came on the market in 1830. Hence taking into account all the details of the kind  materials used, alongside the extent of the decay, experts have concluded that it is most likely the coffins were interred at some point after 1830.

We should also note that the description of the figures as being corpses laid out in funeral dress is also somewhat erroneous. What clothes they are wearing do not indicate funeral dress or shrouds, being simple one piece coverings that do not resemble any form of dress, funereal or otherwise. And as for their appearance, they are depicted with their eyes open rather than closed in the sleep of death. All the figures are male, and have more or less identical facial features. Some figures have arms and some do not, and those that are without have clearly lost limbs rather than having been designed that way. They show signs that they previously had hats, the carving of their legs suggests knee breeches and hose, and their feet appeared to have been painted black. From their poses, and the fact that they appear to need some sort of accessory to hold in their hands to stand upright, expert analysis has concluded that in all likelihood they were originally toy soldiers, made in the late 1700s, with their clothes being later additions. Therefore we can deduce that these figures were re-purposed for their strange burials.

Another interesting detail is that while the figures are made of white wood, the coffins are carved from Scottish pine. Analysis has also revealed that they were not the work of a carpenter or wood carver, but judging from the knife marks and materials used, they were likely to be the work of an amateur using the tools of the trade of a leather-worker or cobbler. Also the coffins come in two styles, one square, one rounded, which suggests that either there were two makers at work, or that their creator changed or refined their style as they were being made over a period of time.

However as enlightening as all this may be, these facts revealed by modern science still cannot answer why the Fairy Coffins were buried or what they were meant to achieve. But there have been plenty of  theories put forward over the years, and we shall explore the various explanations for them next week! 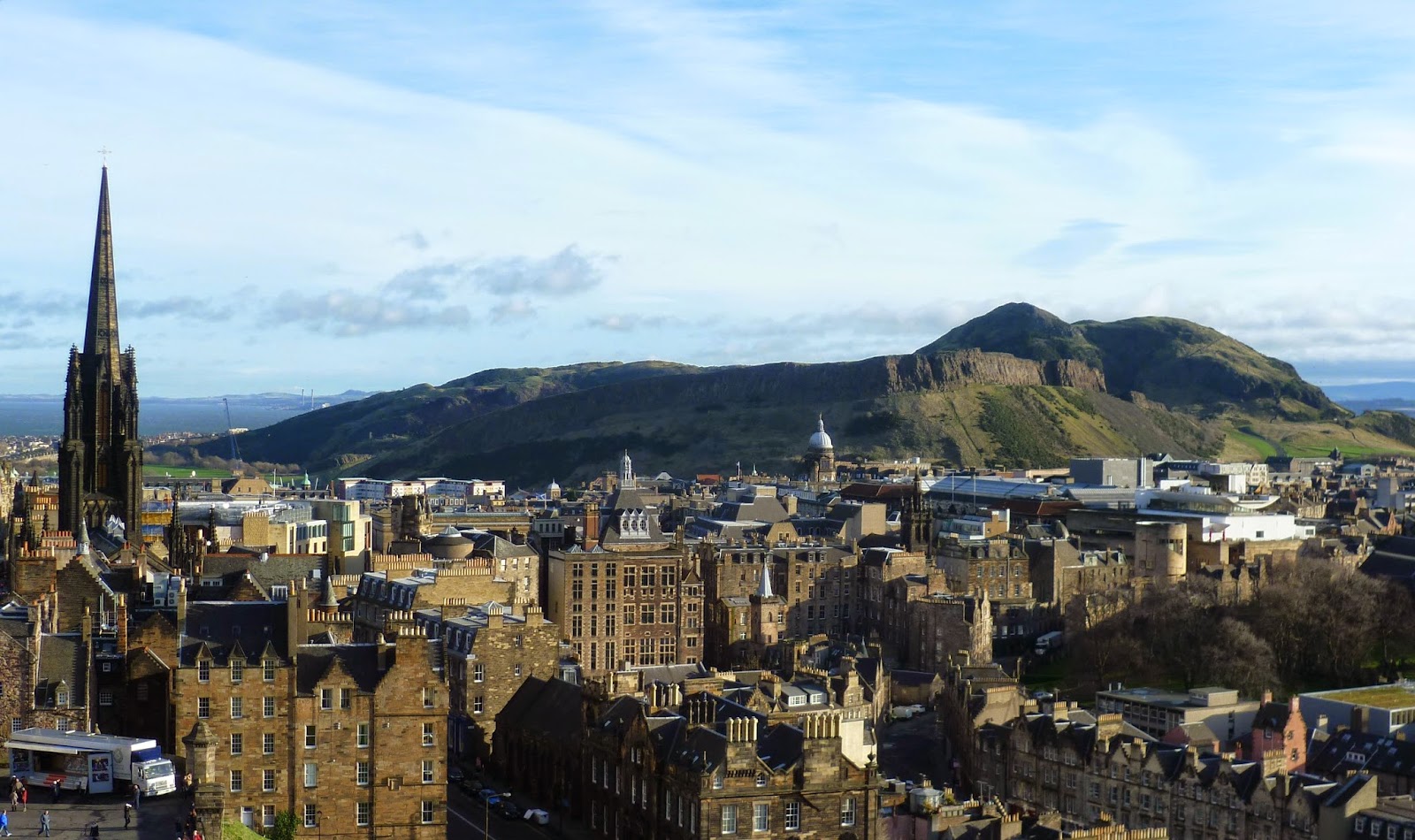