FOLKLORE ON FRIDAY - Of Pasties and Piskies Part II 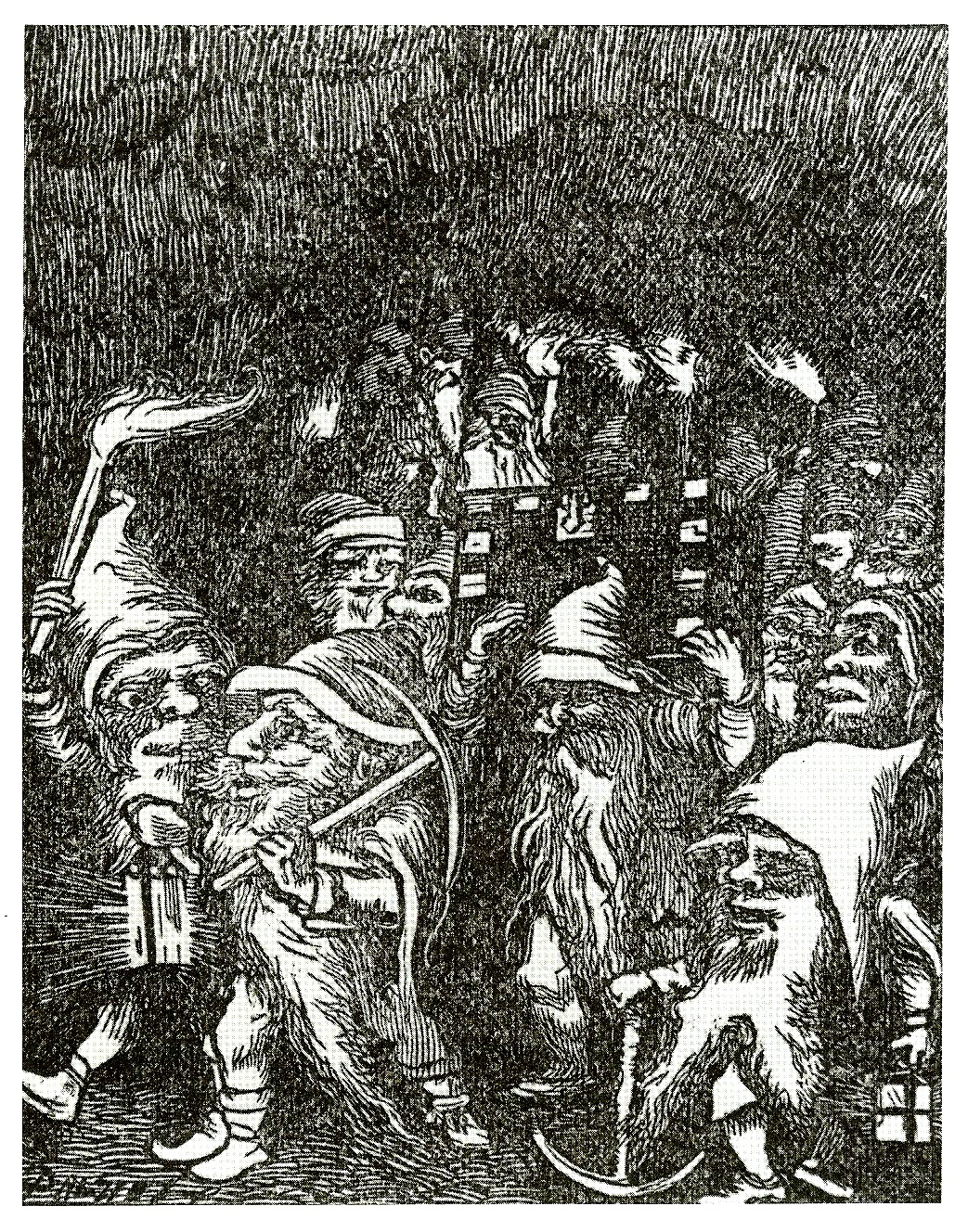 Last week we examined the legends and lore that have grown up around the humble Cornish pasty, and discovered how this pastry delight became the perfect meal for the tin miners in 19th century Cornwall. However the pasty was also popular among the non-human denizens of the mines too...

Cornwall is a land rich in faery lore, and as the Cornish people are descended from Celts they have not only their own ancient language - Kernowek, a Brittonic Celtic tongue related to both Welsh to Breton - but also their own distinct legends and folklore. There are many varieties of Cornish faeries, such as the piskies, tiny faery folk who were mostly benign but sometimes mischievous, and spriggans - ugly beings that were malign, powerful and generally best avoided - haunted old ruins and other lonely places. Generally the Cornish landscape, from the sea, to trees, to wells, and hills was said to be the home of the bucca. Some were good and called bucca gwidden, while more malevolent entities were the bucca dhu, with farmers and fishermen leaving out offerings to stay in the buccas' good graces.

However the most famous of the bucca are the knockers. They were the spirits of caves and wells, and with the tin mining booms in Cornwall, they also became the denizens of the mines. Their names comes from the fact that miners often heard the sounds of mysterious unseen miners working alongside them in the dark. The sound of tapping and knocking was heard in the dark, and sometimes distant voices were heard singing in the dark of the deep. Of course like most faerie folk, the knockers were prone to mischief - missing tools were often blamed on the knockers. But they also had their own peculiar quirks too, for example, knockers hated people whistling, and if they heard a miner whistling a merry air in the shafts and galleries of the mines, misfortune would follow. 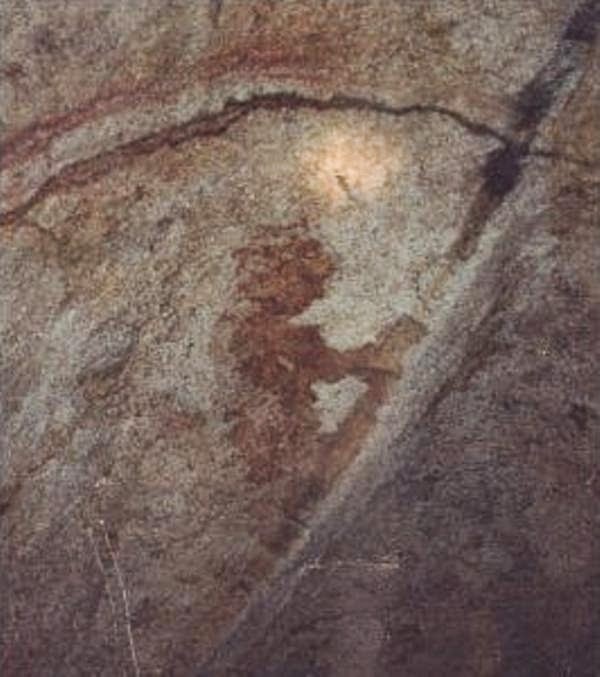 A silhouette of knocker formed by natural deposits in the Geevor mine, Cornwall

They also hated being seen by mortal folk and this is illustrated by a popular old tale. A rather idle fellow called Barker from Towednack did not believe in the knockers or their powers and to prove his point, he camped by an old mine where the knockers were said to dwell. It was no hardship for the lazy Barker to lie in the sun waiting to catch a glimpse of the famed knockers and soon he heard little voices chattering in the mine. He heard that the knockers worked in eight hour shifts and were soon to finish for the day. Furthermore as knockers apparently enjoyed playing tricks on each other as well as humans, several were discussing where they would find their tools so their fellows could not make mischief with them.

Well on hearing this, Barker resolved to listen intently and discover these hiding places and steal the knockers' tools for himself. He listen close to the tiny voices emanating from the mine... "I shall hide mine in a cleft in the rocks!" said one, "I shall hide mine beneath a fern!" replied another. "And," exclaimed a third, "I shall hide mine ON BARKER'S KNEE!". And at that very moment, the unfortunate Barker was wracked with pain as a heavy crushing blow from an unseen force battered his left kneecap.  He screamed and scream and fled as fast as he could from the place with the laughter echoing from the mine ringing in his ears. And for the rest of his days, he was to walk with a limp, and the tale is remembered in a common Cornish phrase - "as stiff as Barker's leg".

However the knockers were also a boon to the miners, for the tin miners of old soon learnt that it was wise to heed the odd noises that were purportedly the knockers working down in the deep. It is was said the knockers' sounds could lead a miner to rich seams, or more importantly give warning of an imminent tunnel collapse. Therefore soon it was considered unsafe to work in mines that didn't have knockers in them, and old mines were never entirely sealed up to let the knockers come and go as they pleased. And to keep in good favour with these mysterious mining spirites, the miners would leave them gifts and offerings. However rather than the usual cream, milk or bread that traditionally one leaves out for the faeries, the miners would leave tallow and candle ends for the knockers' lanterns. But also, the miners would leave a portion of their beloved Cornish pasties for the knockers, with some claiming the pasty's distinctive ridged crust being specially designed to throw into the darkness for the little folk.

The Cornish mining industry was so successful that soon Cornish miners were in demand overseas, with mine owners across the Atlantic in the USA, and even on the other side of the world in Australia, looking for Cornishmen to come over and bring their expertise. And naturally these migrating tin miners took their favourite meal with them, and hence the Cornish pasty became the world famous dish it is today. However the knockers also came with them, and soon where up to their usual tricks in mines across the globe.

And while over time ideas about what the knockers actually were would change - for example, similar to the Cauld Lad of Hilton, the original concept that they were bucca who lived underground shifted to them being the spirits of deceased miners - belief in these mining spirits would persist well into the 20th century. Not only did the descendants of the original travelling Cornish miners claimed that their luck in finding new seams or dodging tunnel collapses was due to the aid of the knockers, but they also insisted that the old ways were respected - refusing to work if an old mine was totally sealed up. Nor would they to begin work in a new one if the familiar sounds of knocking in the dark had not been heard. And while the old ways of mining are now gone, tales of the knockers persist and these mysterious sprites are still held to be working in old abandoned mines to this very day. 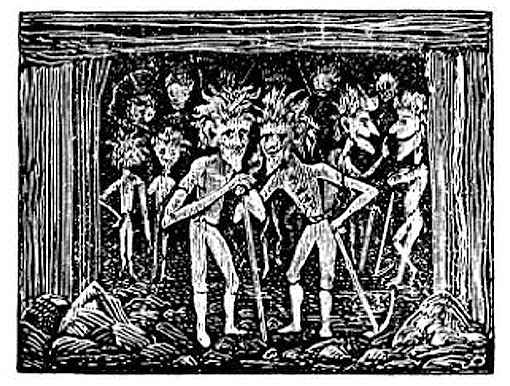