The Truth About Jenny Greenteeth 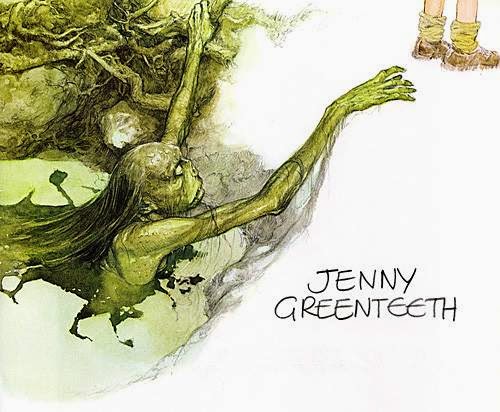 Water is one of the essentials for life and any human settlement needs to have a source of water nearby. Therefore it is unsurprisingly that seas, lakes, rivers, ponds, springs and wells have all been considered sacred by our ancestors. Likewise given our dependence on waterways and water sources, it is not surprising that across the world, every culture has populated these crucial places with all manner of deities, spirits, faeries and demons.

There were all manner of gods and goddess of the waters back in pagan times - from mighty Poseidon and Neptune who ruled the Graeco-Roman waves, to smaller local divinities such as the Celtic Sulis, the patron goddess of the thermal springs of Bath in England. But after the denizens of such polytheistic pantheons had faded away, legends persisted of strange beings who dwelt in the waters. Some were beautiful, water nymphs such as the nereids, naiads and assorted merfolk, but many were of dark character. Across the globe, folk tales tell of supernatural horrors that wait in the weeds and haunt the water's edge, just waiting to grab the unwary and grab them down to a watery grave. The Australian Bunyip, the Japanese Kappa, the Germanic Nixie, the Meso-American Ahuizotl and the Slavic Rusalka are but a few of these of malevolent dwellers in the depths.

The British Isles, being lands that are so famously green and pleasant thanks to the numerous rivers, streams, brooks, springs, ponds, lakes, lochs, meres and tarns, naturally has a host of such drowners in its folk tales. In Ireland there is the Aughisk, in Scotland the dreaded Kelpie, the Isle of Man has the Glashtin, in Wales the Morgens, and England is home to the Grindylows. Virtually every area has its own local watery horror, and folk tales abound of water horses and river hags. In my own immediate area, the River Tees is said to be the home of Peg Powler, a green-skinned water witch who waits to prey upon the unwary, grabbing the careless and dragging them down to drown on the murky river bed. 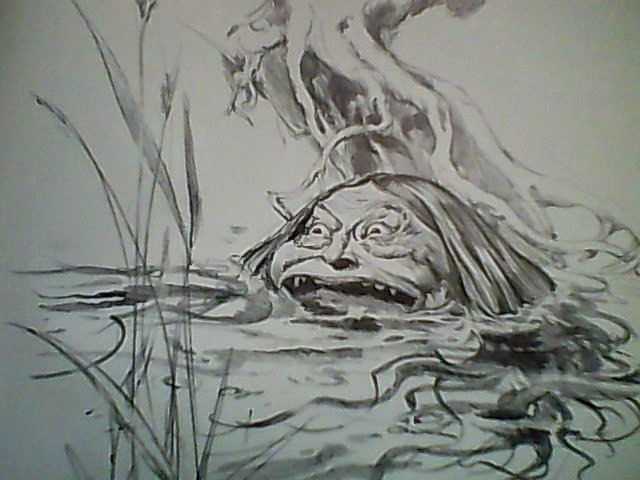 However the most famous of these aquatic terrors is Jenny Greenteeth. Identical in all regards to Peg Powler, this hag haunted the waters of Lancashire and the North West of England and has become the poster girl for this kind of lurker in the waters. Not only has Jenny found her way into fantasy and horror fiction on numerous occasions, but tales about her were still being told well into the 20th century - for example, in some areas she is said to haunt those recent industrial additions to the modern landscape, the canals. 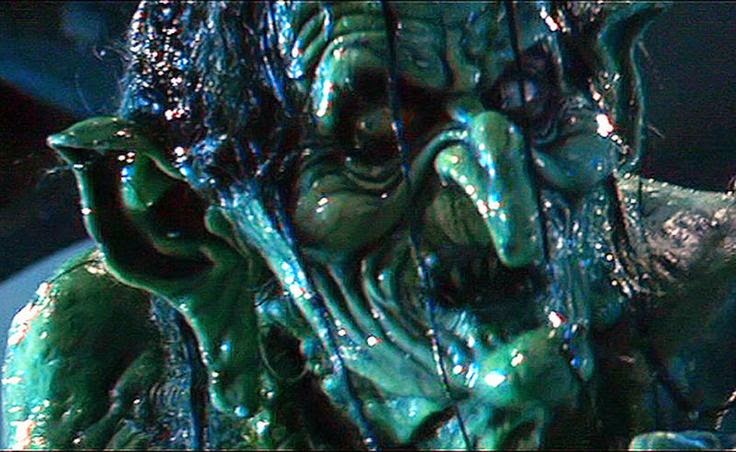 And such folk-tales are probably still being told today, for there is nothing better to keep children away from dangerous stretches of water than a story that there is a monster waiting to drown them there. Death by drowning still accounts for a large proportion of accidental deaths in children across the world and hence scary stories about horrors that seek to drown you still serve a useful purpose. Indeed in the 1970s, a British Public Information film memorably put a modern spin in this kind of cautionary folk tale, employing the vocal talents of the great Donald Pleasence to scare the living daylights out of an entire generation -

It has long being suggested that the origin of all manner of creatures from Jenny Greenteeth to kelpies and kappas, was in fact to warn folks away from  mucking about in stretches of water. However while there is undoubtedly some truth in the idea that these predatory water monsters are cautionary tales made folkloric flesh, this explanation of them is somewhat flawed. The problem is that this mooted origin is the product of an age where we usually stay away from the wild waters of the countryside; it is born of an age where we have running water piped into our homes.

But not that long ago, folks didn't have the convenience of modern plumbing and municipal waterworks - bathing, washing clothes or even getting a drink meant a trip to the local water source. Hence warning folks away from the local stream or well, somewhere that you needed for nearly every aspect of day-to-day living , makes little sense. However living so close to natural waters was undoubtedly dangerous: in Tudor England - when a drink, a wash, or even a trip to the loo meant a stroll to the water's edge - drowning accounted for a whopping 40% of all accidental deaths. Therefore when death by drowning is so common, it seems possible that maybe tales of murderous water sprites may not be somewhat impractical warnings to stay away from the water but proposed explanations for so many drownings.

Examining the gruesome mechanics of drowning certainly puts these sort of legends in a new light. Firstly we should note that drowning does not occur how we generally imagine it to, and indeed how it has been portrayed on TV and in movies. Rather than much splashing about and screaming and gasping, drowning is actually largely very quick and very silent. In fact death by drowning is alarmingly swift and quiet, occurring in under three minutes, and often with so little commotion that even people close by in the water will usually not notice there is anything amiss. This is due to the human body's involuntary responses that kick in the moment you begin to inhale water, and in 1971, lifeguard and researcher Frank Pia identified what are now called instinctive drowning responses, which most people will not notice but now, thanks to his pioneering work,  lifeguards are trained to spot. 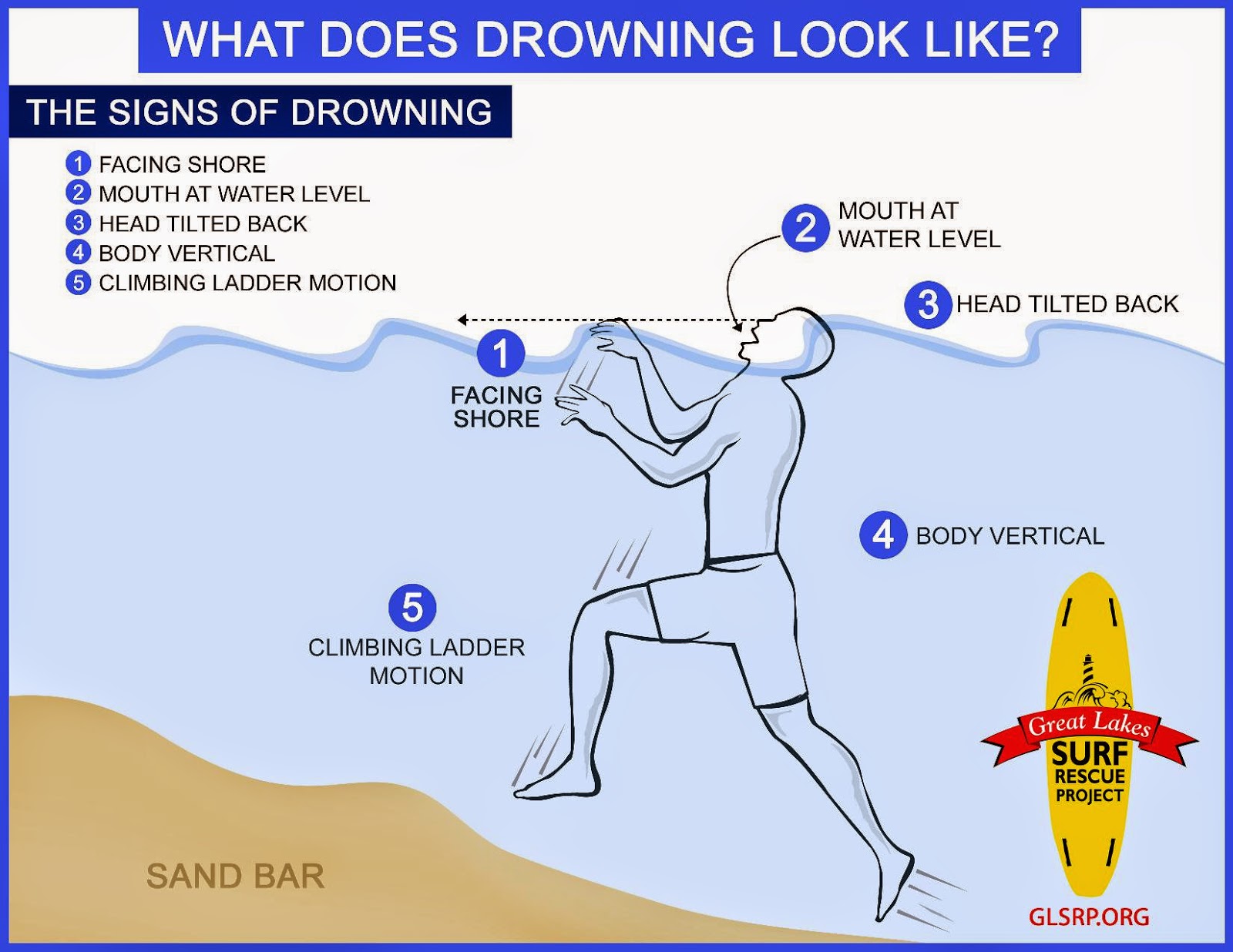 The first response is for the larynx to close preventing further water entering the lungs. However this also blocks the airways and silences the voice; indeed it is this defensive closing of the windpipe that causes the death in most cases rather than the lungs being filled with water. Hence the person will be floating in the water with their mouth above the water line, but still will be unable to breathe, and more crucially, make any sound.

The other response is for the body to automatically attempt to raise the mouth out of the water, and so it appears that the person drowning is merely swimming in a leisurely fashion, or treading water. However this physical response is so over-powering, so over riding, that they are actually physically unable to make any other voluntary movements, such as signal to others they are in distress. Due the rapid effects of the shutting down of the air supply, the victim soon slips into unconsciousness, and may in these stages appear perfectly calm. However once unconscious, they will just slip beneath the surface. It is then in some cases that the involuntary seal of the larynx may relax and the lungs will fill with water, but in the majority of cases, death will result from cardiac arrest before this occurs. And this is how coroners can tell if a body was alive or dead when it entered the water - a live person who has drowned will have relatively little fluid in their lungs, whereas someone who was murdered and thrown in the water will have lungs full to the brim.

So then to any observers, a drowning person will appear perfectly normal, apparently just enjoying the water... only to suddenly vanish beneath the surface, and only to surfacing again as a drowned corpse! Hence as drowning occurs in such a different way to how we imagine, it is easy to see how people could well believe that the unfortunate drowned soul was suddenly pulled beneath the waters to their doom by some aquatic horror. Indeed the signs of drowning are so counter-intuitive, that even to our sophisticated 21st century eyes; to folks who do not believe in nixies or merrows, it would appear that some one who was enjoying the waters has abruptly been dragged below by a predator. And of course when no predator can be found, in ages gone by naturally enough it was assumed to be a creature from the supernatural realms rather than the local fauna. 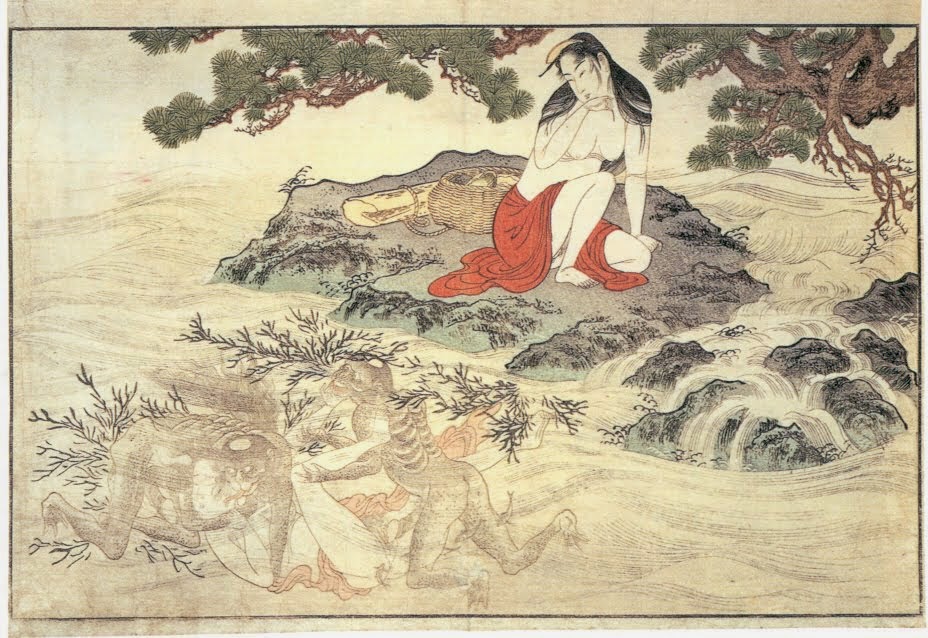 I am sure it is no coincidence that many of the murderous supernatural beings that haunt the shores and waterways of the world share a certain characteristic. And that is, from bunyips to kappas, from grindylows to Jenny Greenteeth, many are described as possessing long, strong arms with which they reach up from the weedy depths and catch the feet and legs of their prey. Folk beliefs often have their roots on misunderstood or unknown forces of nature, and in the case of these malevolent drowners that have haunted people in every corner of the world, it would appear that they spring from our ignorance of the gruesome mechanics of drowning. So then, do not only teach your children to take care when playing near water, but also make sure you learn and teach others how to spot the real signs of drowning.

Enjoyed this! Made me think of the "underwater panthers" from the tales of some North American indigenous groups.