FOLKLORE ON FRIDAYS: Robin in the Woods 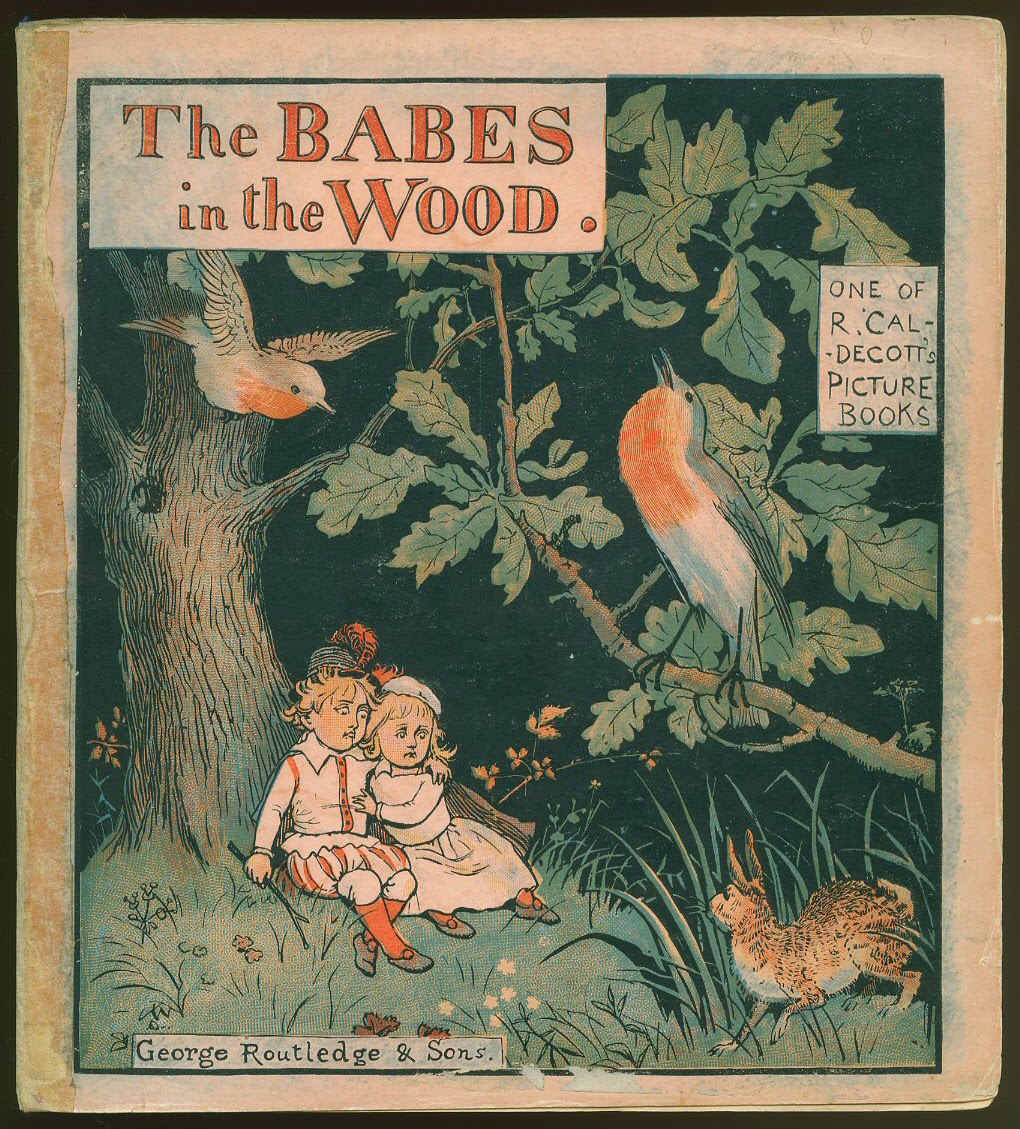 Last week we explored the folklore surrounding Britain's favourite garden bird, the humble robin redbreast. And we discovered a wealth of superstitions sharing the the common belief that of all the wild birds, the robin was not to be harmed. As A. E .Bray put it in 1838, "Very few children in this town would hurt the redbreast, as it is considered unlucky to do so; this bird being entitled to kindness... above every other". However why the robin has this folkloric reverence is something of a mystery, and one that has been much pondered for many centuries. Indeed in 1709, a somewhat angry sounding gentleman queried the readers of the British Apollo thus -

Q. The Robin Red Breast is as malicious and Envious a Bird as any that flies...
I desire to know why many People should have so good an Esteem of this Bird,
as to account it a Crime to do it any  Injury

Sadly there is no recorded reply, however a few years later in 1713 the topic was raised again in the pages of the Guardian newspaper. And on May 21st the following theory was proposed - "As for Robin-redbreasts... 'Tis not improbable they owe their Security to the old Ballad of The Children in the Wood ". And that opinion was echoed by a later essayist writing in September 1735 in the Gentleman Magazine who remarked -

And thus the Robin Redbreast hath been the cause of great superstition among the common people of England ever since the silly story of The Children in the Wood. One great instance of this is their readiness to admit him in to their houses and feed him on all occasions; though certainly he is an impudent and as mischievous bird as ever that flew.

Now then, for those of you familiar with traditional British pantomimes, all of this will be ringing a Christmassy bell. And for those of you who are not, briefly allow me to explain. Pantomimes are a unique form of British theatrical entertainment performed over the Christmas season. They present versions, full of music and comedy, of well-known children's tales; traditionally fairy stories such as Jack and the Beanstalk, Cinderella, and Sleepy Beauty, and over the years tales from legend and childrens' classics have become pantomime staples too, such as Aladdin, Peter Pan and the Wizard of Oz . 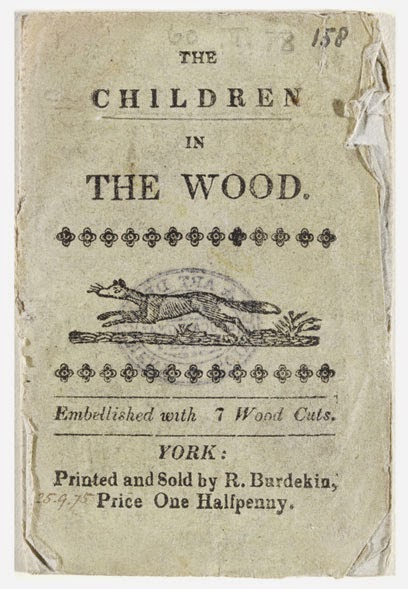 Now one of the oldest pantomimes is Babes in the Wood, which is derived from the afore-mentioned old ballad. Like most pantomimes, Babes in the Wood is a story told in two acts. In the first we learn of two children, a boy and girl, who are orphaned and fostered with a guardian - sometimes a Wicked Uncle, sometime a baron, and sometimes even the Sheriff of Nottingham. Anyhow, this villain plots to dispose of the pair and steal their inheritance. Hence he arranges for the children to be taken into some woods by a pair of robbers and murdered. However one of the ruffians takes pity on the children, fights with his more coldblooded compatriot, and allows the children to escape into the forest.

Deep the woodland the children hide and as they fall asleep, robins fly down and cover them with leaves to keep the babes warm, and thus the curtain falls on Act One. In Act Two, the children, often with the help of a good fairy, are discovered by Robin Hood and Maid Marian, who naturally not only look after the pair but help to restore their fortunes. There's various retellings of traditional stories of his cunning and bravery, and of course at last Robin and his merry band triumph over the wicked folks, and the children are restored to their rightful home and fortune.

Given the traditional basis of pantomimes and coupled with the appearance of that other old favourite Robin, Hood and his Merry Men, many have assumed Babes in the Wood to be an old English folk tale. And that is partly true, as the panto tale derived from an old ballad. However in the earlier versions of the tale, Robin Hood does not appear to find the children, or indeed appear at all. The familiar pantomime version is actually a hybrid creation, wedding the Robin Hood legends onto the tale of the Children in the Wood. More shockingly, in the original ballad, the tale of the Babes actually ends like this  -

Thus wandered these two prettye babes,
Till death did end their grief;
In one another’s armes they dyed,
As babes wanting relief.
No burial these prettye babes
Of any man receives,
Till Robin-redbreast painfully
Did cover them with leaves. 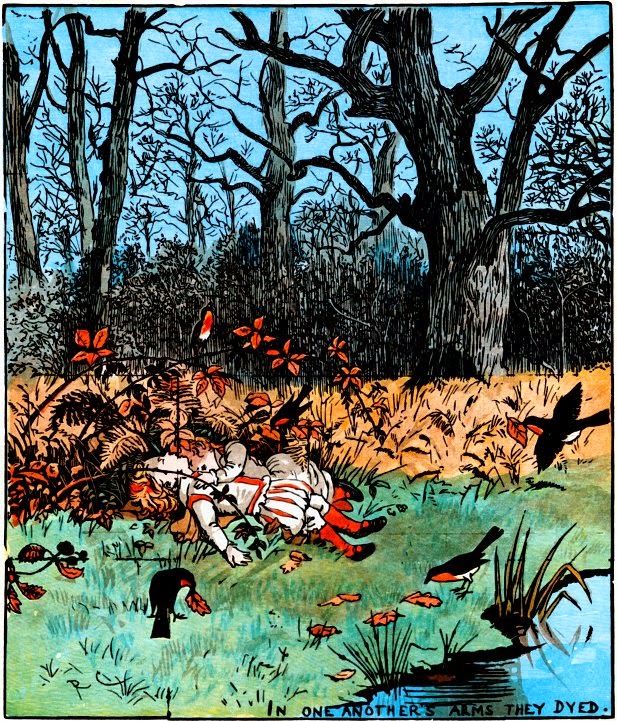 Yes, in the original story, there is no rescue for the children! After being turned loose by the kinder of the two ruffians, the children wander the forest, and despite finding a few berries, end up starving to death. And rather than providing a leafy blanket, the robins provide a rustic shroud.

Now robins covering the dead in this curious fashion appears to have been a prevalent belief in the early 17th century. In John Webster's celebrated play The White Devil from 1612, Cornelia says -

Call for Robin-Red-brest and the wren,
Since ore shadie groves they hover,
And with leaves and flowres doe covre
The friendlesse bodies of unburied men

Before Webster, Shakespeare himself referred to the funereal habits of robins - under their old English name of the ruddock - in Cymbeline in 1611. The bard of Avon has Arviragus weeping over the supposed dead body of the disguised Imogen, saying:

The Raddocke would
With Charitable bill — O bill, sore shaming
Those rich-left heirs that let their fathers lie
Without a monument! — bring thee all this ;
Yea, and furr'd Mosse besides, when Flowres are none.
To winter-ground thy coarse. Say, where shall 's lay him?

A little earlier in 1604, the poet Michael Drayton wrote in his satirical verse The Owle:

Certainly this belief that robins would attend to the unburied dead does seem to chime well with the death omens that are associated with this little bird. However no earlier mention than the first publication of Children in the Wood in 1595 can be discovered. A tome from 1889 - Myths of the Robin Redbreast in Early English Poetry - mentions two other ballads that have the robins burying the dead The Soldier's Repentance and The West Country Damosel's Complaint, that have been claimed to be older than The Children in the Wood. However both were actually printed after 1595, with only their original collectors' speculating that their origins lie earlier in the 16th century.

However that being said, the Classical poet Horace does make reference to doves doing the same kind of rustic burials, and it is not usual to find these kind of folkloric beliefs being transferred between different species and the belief migrates over time to different regions. For example, much of what we have heard about it being ill luck to harm robins has in other regions and at other times been said of wrens and swallows too.

So then it is possible that this bit of folklore does date back further than its first printed reference. And it should be noted that it is commonly agreed by scholars that ballads printed in chapbooks and on broadsides would have been in public circulation long before its publication. Indeed, the fact Children in the Wood did make it into print is a measure of how well-known and popular the tale already was. And there is a curious and dark history to the ballad that we will investigate next time... 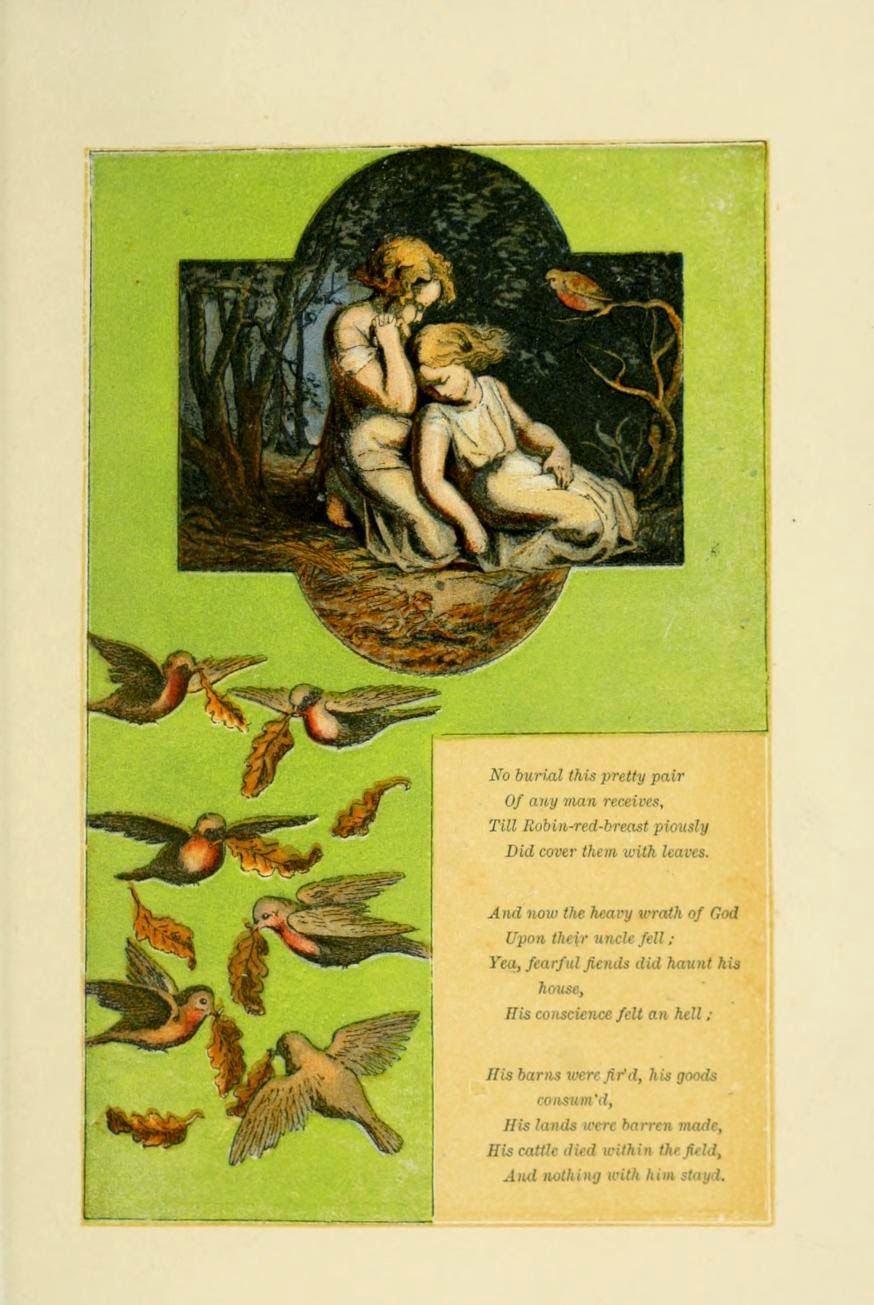