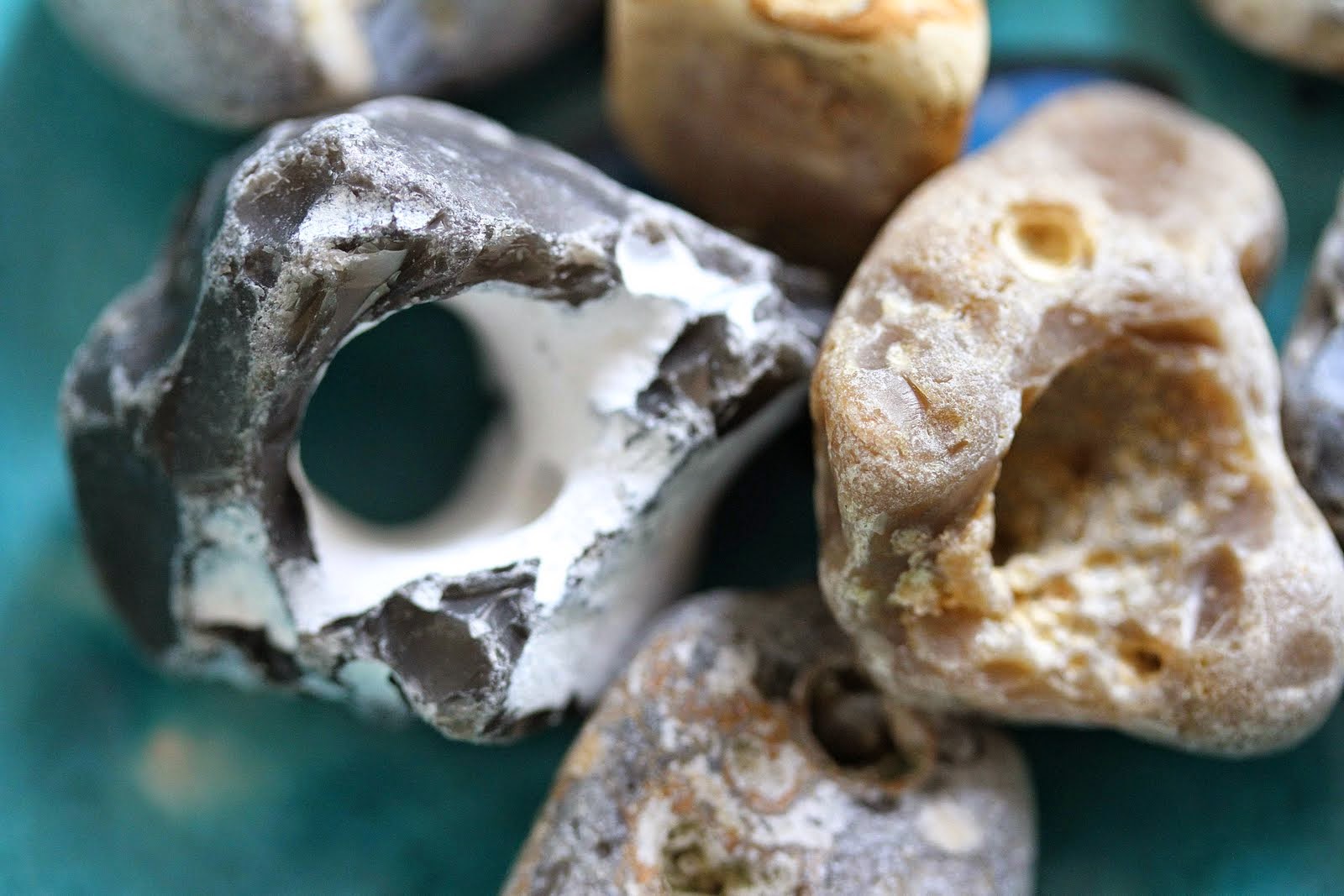 Last week, we discussed the ritual of the turning of the Devil's Stone in the village of Shebbear, and while geologists have theorized that it was probably deposited there thousands of years ago by glacial ice, others have wondered whether it was placed there deliberately. While clearly not a proper standing stone or megalith, Shebbear's ancient stone is one of many such mystery rocks that can be found in ancient settlements across Britain and Europe. Clearly they were important to communities in times gone by, but what purpose did they serve?

On the Shebbear village website, two theories are mentioned, with the first being that the Devil's Stone was an old village marker stone. Now this is quite plausible as the Anglo-Saxons, and folks before them, were in the habit of placing large natural boulders in significant places to mark boundaries. In the early days of archaeology these were thought to be grave monuments, and indeed some were. However others, in the absence of any burial below them, are now thought to mark where territories began or ended. Hence as the Devil's Stone is quite close to an ancient church, possibly it marks where the church land began.

However the second theory is far more intriguing - and that is that this ancient rock was a kind of large dobbie stone. And what in the blue blazes is one of those you may well be asking? Well a dobbie stone was a special kind of stone that gave protection against witches, fairies and  (obviously) dobbies. And those of you now making Harry Potter jokes, are actually closer to the truth than you realise. For a dobbie  - regionally varying to 'dobie' or 'dobbs' - is an old English name for a kind of spirit, whose nature and description varied from region to region.

In some places a dobbie was a kind of ghost, in others a faerie sprite. For example, in County Durham the Shotton Dobby was a shapeshifter appearing variously as an unusually large dog,  horse, cow or goose, and delightly at charging at travellers screeching and then promptly vanishing. However it was also said its appearance foretold a death or a birth in the village. In Lancashire, Dobbies were thought to be more ghostly, indeed any ghost seen outside or in the countryside was dubbed a dobbie. And in North Lancashire, it was said that the watery spirits that haunted the caves and coves of Morecambe Bay were dobbies. While in Cumberland, Sussex and some other places, dobbies a playful but helpful faerie that attached itself to a household, and if welcomed would perform useful chores but if annoyed play pranks - and indeed these legends inspired the naming of JK Rowling's famous large eared house elf. At the Pevensey Court Museum, there is a statue of one such dobbie - 'Master Dobbs' pictured here - 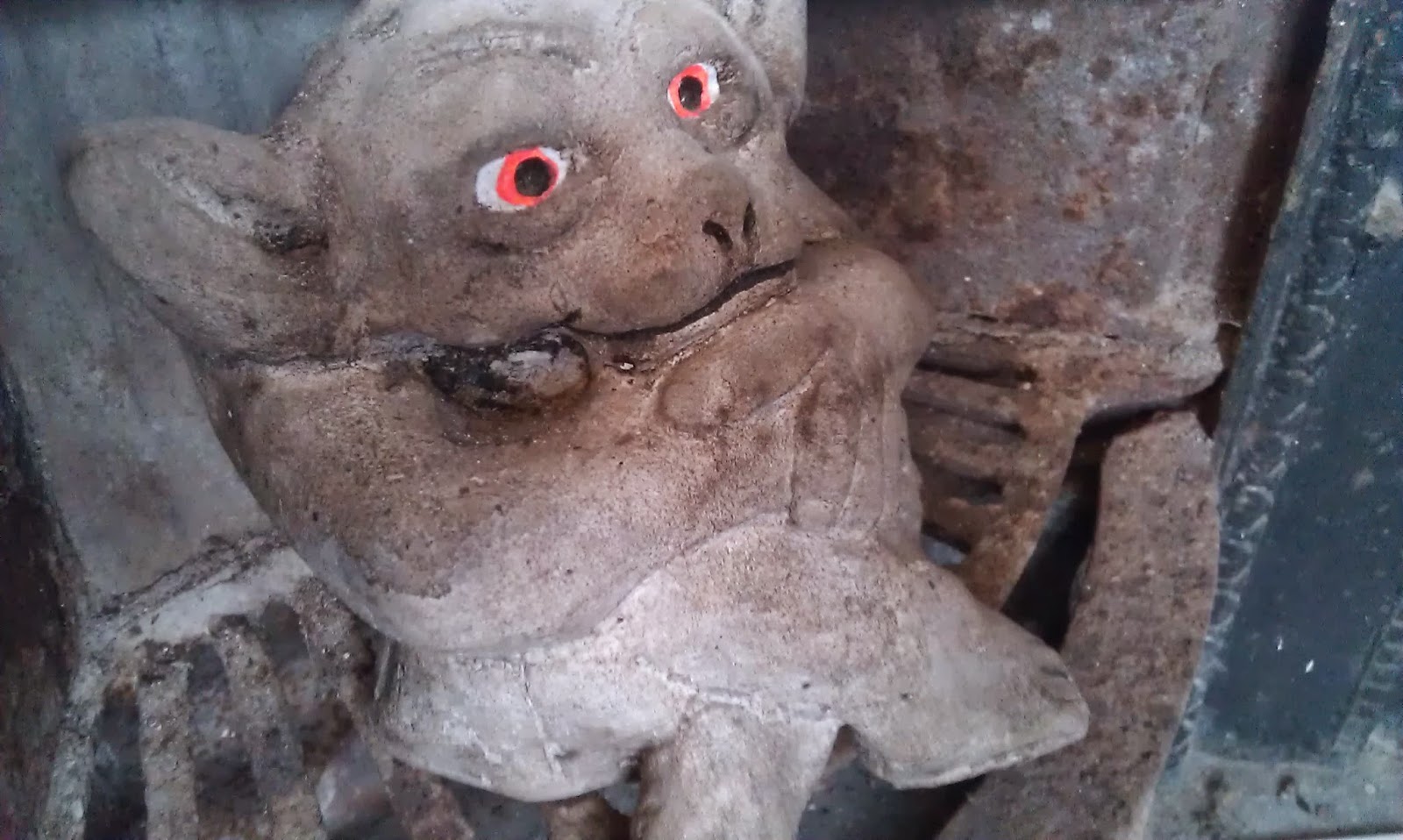 No one is exactly sure where the name 'dobby' comes from; some scholars have suggested it may share the same root or be a corruption of 'bogie' or 'bogle' - words that are similarly used to describe a range of supernatural ghosts and goblins. Other students of folklore have suggested it is derived from 'Robin', as in 'Robin Goodfellow' - again a generic name for assorted imps, sprites and spooks in English folklore. And old Goodfellow has previous in this field, with the associated terms 'hob' and 'hobgoblin' coming from Robin being shortened to Rob.

However, whether faerie, demon or spectre, dobbies of all varieties could be warded off with special stones. Normally these were small stones that had a naturally formed hole in them. It was said that these stones could protect you from ghosts and faeries, shield you from hexes and spells from witches, and even repel snakes and serpents. Additionally it was said these stones could be used to prevent or even cure a variety of ailments: nightmares, snakebites, rheumatism and whooping cough.

And this was a very widespread belief, with these holed stones being variously known in different regions as hagstones, adder stones, witch stones and serpent eggs. Furthermore stables, farm buildings and houses up and down the country have been found with dobbie stones hung up in them as part of their construction. Indeed even today, the belief persists - albeit in a watered down form - that it is good luck to carry a holed stone in your pocket. 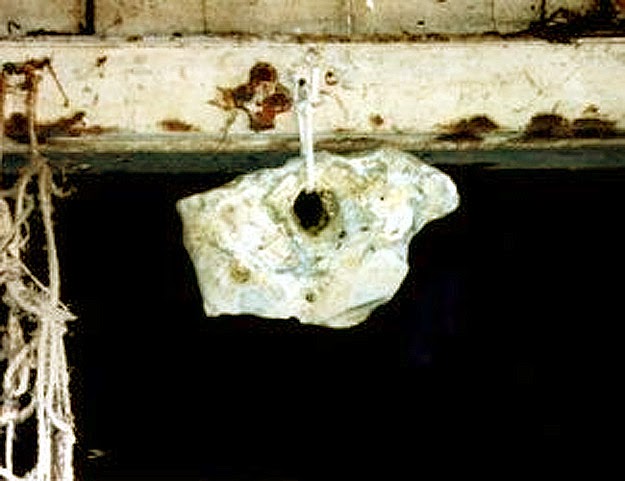 Quite why it was thought a stone with a hole in had these powers, no one is entirely sure. Their curative properties can be explained as deriving from the associated beliefs that the ailments listed were commonly thought to be caused by the entities the stone also repelled - for example an old term for suffering from nightmares was 'hag-ridden' referring to the belief that witches caused nightmares. But why dobbie stones had these protective properties in the first place remains a mystery.

Possibly the protective powers are linked to another common belief about them - namely that if you look through the holes, you will be able to see into the supernatural world. Hence various places have legends stating that if you looked through the hole in a dobbie stone, you could see the spells woven by witches, the unseen imps up to no good, and reveal the invisible world of the faeries.

The fact that all holed stone traditions are very clear on the point that the hole must be natural and not man-made for the dobbie stone to be effective is surely relevant somehow. Possibly in ancient times it was thought that as these holes were natural wonders, they therefore had the power to reveal other hidden wonders of the world. And hence it is a short step to theorize that a person who could see the invisible world could have power over it. Hence hanging up a holed stone could have been a warning to those unseen denizens of the supernatural realms - a way of saying don't try your tricks here are we will discover you! 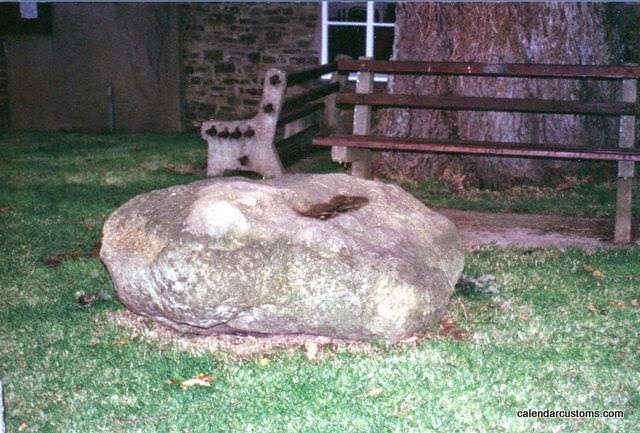 In several places in Britain and Northern Europe there are large megaliths with holes in them, the most famous being Mên-an-Tol in Cornwall. However not all of the large rocks that have been employed as dobbie stones have holes in them, and the Devil's Stone falls into this category. However these large non-holed dobbie stones do have a natural bowl-like depression in them, as does the famous boulder of Shebbear. And in times gone by offering to placate the local spirits and faeries were left in these natural offering bowls, usually milk or honey or bread. However scholars suspect that in very early times, these offerings to appease the supernatural powers may have been somewhat bloodier...

And it is theorized that this practice emerged from primitive peoples seeing a stone with a natural bowl shape in it and assuming that the local spirits of the place intended it to be used for offerings. Much like the smaller holed dobbie stones, it is a case of the natural world providing a means to communicate with the spiritual one. And it is interesting to note that the dobbies which give these stones, both large and small, are invariably seen as natural spirits inhabiting the countryside, and more interesting when a dobbie adopted a place and served as house elf, it too was welcomed and placated with gifts of milk and bread left out overnight.

One cannot help wondering that perhaps the practice of hanging up a dobbie stone was possibly derived from an older piece of hedge magic, a way of perhaps binding a dobbie to place, creating a guardian sprite to watch over your home and animals. But whatever the long lost origins of these customs are, should you discover a stone with a hole in it, picking it up and bringing it home may well be a very useful thing to do. 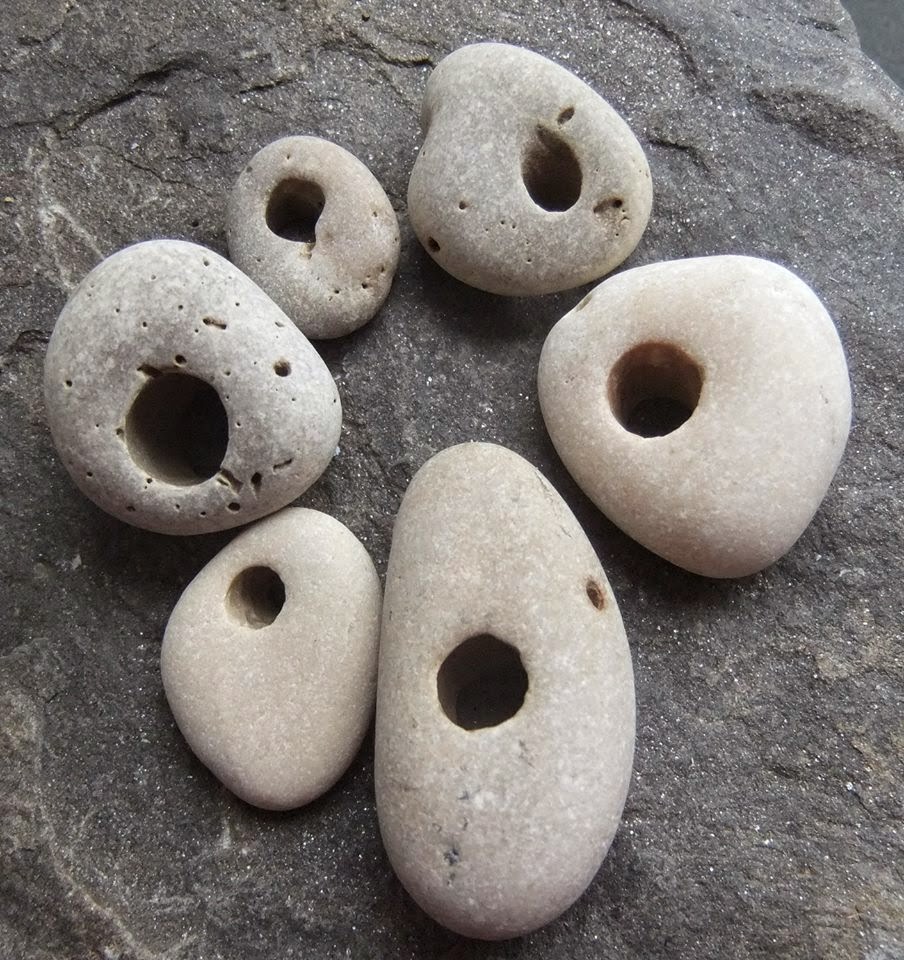