FOLKLORE ON FRIDAY - The Rampages of Robin Redcap 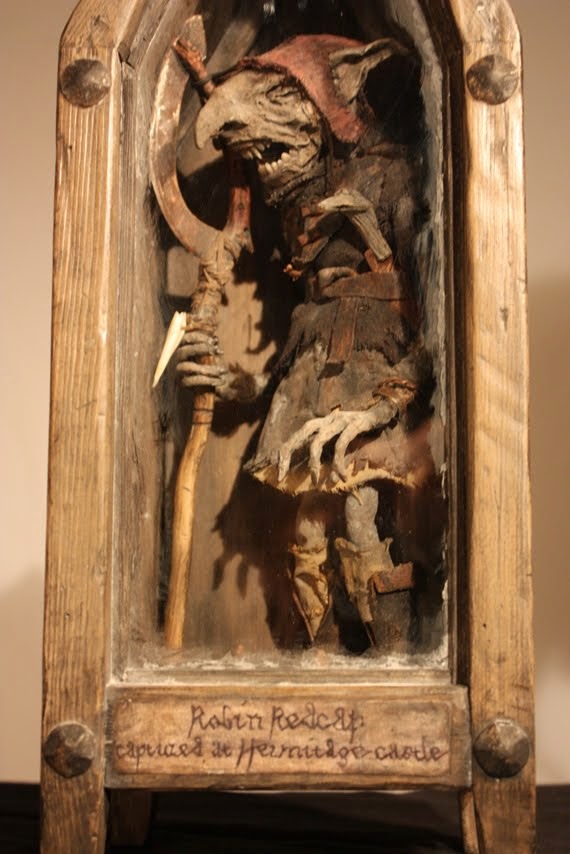 Up and down the borders of England and Scotland, legend tells of a particularly nasty species of faerie, sometimes called powries or dunters but most infamously, the Redcaps. Short, wizened and extremely vicious, sporting sharp teeth and eagle like talons, these twisted little horrors wore iron boots and were armed with heavy pikes, and were said to infest castles and keeps in the borderlands, lying in wait to ambush travelers. Their preferred gambit was to roll or hurl boulders at their passing victims and then drink the blood fresh from the mangled corpses. And their name comes from their custom of dipping their hats in the spilled blood. Furthermore it was said that should that blood ever dry completely, the Redcap would die.

Despite their iron footwear, Redcaps were terrible fast - few of the victims could outrun them. However they could not abide the sound of holy words, and so on hearing the recitation of passages from the Bible, the Redcaps would flee at great speed, leaving behind one of their teeth.

The most famous of these bloodthirsty sprites was Robin Redcap. In the 1300s, Hermitage Castle in Roxburghshire was home to Sir William de Soulis, a cruel and evil man who according legend practiced the black arts and gained a familiar spirit, a Redcap named Robin whose bloodthirstiness encouraged de Soulis to greater evils. Hermitage Castle was so filled with murder, torture and rape that it was said the very weight of such great sins were pushing the castle into the very earth, as if the stones were trying to hide from the sight of God.

Eventually the locals could stand no more and rose up against their cruel tyrant. However Robin Redcap had conferred upon de Soulis a curious power - thanks to the goblin, and at the price of his soul, de Soulis could not be harmed by "lance and arrow, sword and knife" nor would ropes bind him. However siding with the locals, the King of Scotland's army took arms against de Soulis and despite his magickal invulnerabilities, de Soulis was still captured - from despite Robin's powers preventing the King's men from binding him, they instead rolled him up in a sheet lead. The King decreed he was to be put to death, so de Soulis was taken to a circle of standing stones, Ninestane Rigg, just outside Hermitage Castle.  A huge cauldron was set inside the ring of ancient stones and a great fire was lit beneath it. And thus when the flames grew hot enough  "They plunged him into the cauldron red/And melted him, body, lead, bones and all."

When his master perished Robin Redcap disappeared, however it is said the devilish goblin had amassed a treasure hoard which lies hidden to this day in Hermitage Castle, and the terrible sprite has been seen several times over the years, presumably still watching over his hoard...


Illustration - a mummified Robin made by Mr Jacob Petersson
Posted by Jim Moon at 17:43