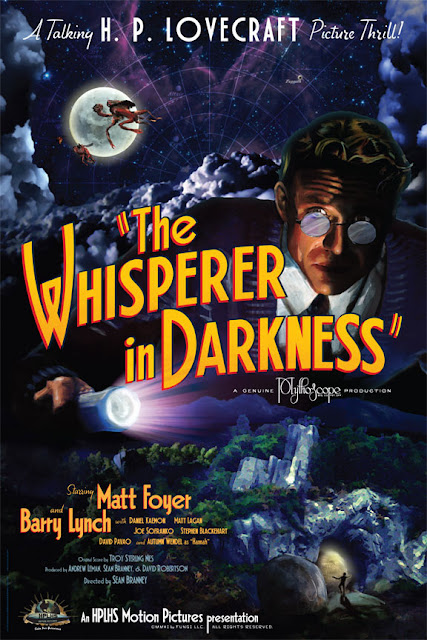 The Whisperer in Darkness is one of HP Lovecraft's most famous tales, one of his later works that blends horror and science fiction to ground-breaking effect. However as influential as Lovecraft has been on both the horror genre and pop culture in general, screen adaptations of his work have been somewhat scarce - or rather screen adaptations that bear any real resemblance to the tales they are alleging to bring to screen is perhaps somewhat nearer the mark.

A case in point is a previous attempt to film this story, 'Whispers' in Brian Yuzna's HP Lovecraft's Necronomicon (1993). Like many purported HPL adaptations, this segment in that early '90s horror anthology takes some elements of the tale, but in such a loose fashion that most would not connect it  to the original source text. And sadly this is all too frequently the result of many screen adaptions of tales from the Old Gentleman of Providence, with many Lovecraftians feeling that the best pieces of cinema that capture the ethos, tone, and imagination of his work have actually been movies that have been loosely inspired by his stories, such as John Carpenter's In The Mouth of Madness rather than films bearing either his or his stories' names.


However Lovecraftian cinema isn't a complete wash-out and indeed in recent years we have seen some excellent movies derived from his writings. In 2005, a group of dedicated fans - actually Lovecraft LARPers - HP Lovecraft Historical Society  (or HPLHS for short) undertook a hugely ambitious project to film one of his most celebrated works, The Call of Cthulhu. While still only a fan short clocking in at 47 minutes and made for a tiny budget of $50000, it was extremely faithfully to the source, but the movie's inspired masterstroke was to make the film as it would have been when Lovecraft's seminal tale of Elder Gods was first published back in 1928. Hence it was it was silent, filmed deliberately scratchy black and white, and used vintage special effects technology. The results were fantastic and HPLHS Call of Cthulhu (2001) was a huge success and hailed as an instant classic. 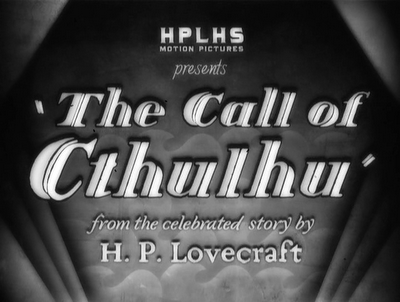 Now spurred on by this success, HPLHS's next feature The Whisperer in Darkness (2011) was an even more ambitious affair, with a bigger budget and a full feature length running time. Like its predecessor, this too is shot in gorgeous black and white, using their patent Mythoscope to recreate the look of a period movie. However as the original tale was written in the 1930s, this time the movie is a talkie and tonally takes its cues from the genre films of that era. Hence we have alien technology as Ken Strickfaden would have envisaged, stop motion Mi-go Willis O'Brien style, and a far more pulp feel.

Again the movie is quite faithful to Lovecraft's original tale, as you'd expect from die-hard Lovecraftians, however as the story comprises mostly of a series of letters and a conversation, the screenplay had a good deal more work to do to turn this classic tale into a feature length movie. For while the story is one of Lovecraft's longer pieces, it is still a work of short fiction and hence some expansion has been necessary. But rather than pad out the original text - a move often leading to flabby films with thin narratives - instead directer Sean Branney and writer Andrew Leman instead have opted to follow Lovecraft closely, telling the complete story (with some minor additions) on the screen in the first two acts, and then adding their own new continuation of the tale in the third.

Obviously this insertion of new material is the most controversial aspect of this production, with some feeling that these sort of additions to the text are diluting the power of the tale. And I can understand this purist view, especially when the sections of the movie so beautifully bring the story to the screen. However structurally with the third act effectively being a bundled sequel, the new material does no great violence to the original tale, and that third act is such glorious fun, personally I find it hard to start quibbling over its non-canonical status. 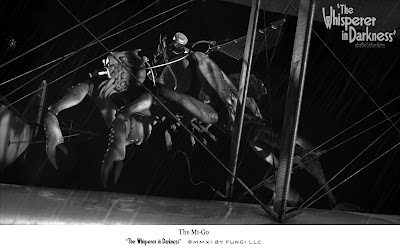 The movie gives us Lovecraft's story and then delightfully takes us into new territory, that while being completely fresh is faithful to Lovecraft's themes. But the fresh material also allows The Whisperer in Darkness  to recreate the dynamics of the 1930s horror movies it is also paying homage too, so it has a last reel complete with an exciting chase and a battle with the monsters. Yes, there's more action than you generally expect find in Lovecraft's stories, however its not entirely out of keeping with the Old Gentlemen's work.

For while there is the well-worn cliche that all his tales end with a hapless narrator just going mad and/or being eaten, At the Mountains of Madness with a daring escape while pursued by a shoggoth, and in The Shadow Over Innsmouth we have the FBI raiding his invaded seaport and torpedoing its aquatic horrors. So then, the thrills and spills in the last act of this movie can be rightly be considered Lovecraftian. Furthermore the climax of The Whisperer in Darkness mirrors exactly the kind of thing that frequently occurs in Cthulhoid role playing games, and with the last act echoing several classic Chaosium Call of Cthulhu adventures, the movie is also a tribute to that classic tabletop RPG that over the years has brought legions of new readers to HP Lovecraft's works.

Hence if you adore Lovecraft, pulp fictions and old SF/horror movies, The Whisperer in Darkness is a must-see. It's a brilliantly literate and loving crafted piece of low budget film-making, showing the HPLHA really spreading their wings. And I for one can't wait to see what they will produce next.