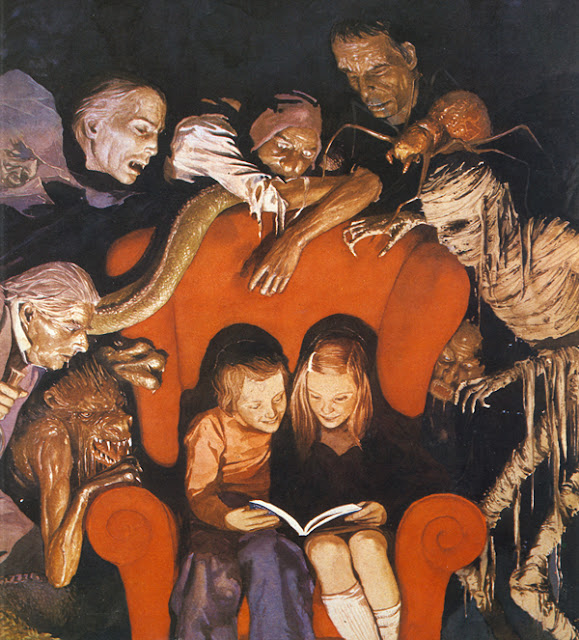 Whenever I receive visitors, their first reaction is almost invariably "You have alot of books don't you!". And indeed I do - I am only half joking when in my introductions for HYPNOBOBS I refer to my abode as the Great Library of Dreams. Furthermore I am also quite sure that I need not describe to all my fellow bibliophiles  that peculiar mix of surprise, awe and, most inexplicably to me at least, horror that plays across their faces. For like many book lovers, I forget that  a house crammed with over-stuffed shelves of diverse tomes is as alien to many folk as a home without a single bookcase is to me.

Of course in my case there's an additional round of funny looks when they see the titles of the books that are surrounding them in teetering piles actually are... Hoards of anthologies of weird tales, endless horror/scifi/fantasy novels, murder most foul in both fact and fiction, weighty tomes on film history, psychology, philosophy and quantum mechanics textbooks, compendia of ancient myth and legend, and volumes of poetry.

Now all of the above appear to be a rather shocking choice of reading material to many people, especially as there's not a single ghost-written large print biography of some moron who has only ever chased a ball about all his life, or a collection of glossy photos illustrating recipes you'll never ever cook to be found among them to leaven the mix; in short, nothing a 'normal' person should be reading.

However, as disturbing as many find the fact  that I am still reading books they associate with school days i.e. Shakespeare and academic text books, on average it's the books with charming titles like The Doll Who Ate His Mother that raise the most eyebrows. "Ah, so you like all that horror stuff..." they say. And you can just tell that they are often pondering whether it will be rude to ask "So why do you read that crap?"

Yes, it's sad to say but horror fiction is perhaps the least respected genre in all literature, often considered to be just one step away from pornography. And while other sorts of book, such as chick lit, the boy's own adventure stylings of Clive Cussler and his ilk, or anything by Dan Brown, equally suffer under the burden of critical and/or  popular disdain, at least if you;re seen reading them people won't assume that you are a budding psychopath who attends autopsies in your spare time. Even it's kindred genres of scifi and fantasy have better reputations; the former may be nerdy but at least it's scientific, and while the latter may be escapist nonsense about elves buggering about in la-la lands with unpronounceable names that would score well in Scrabble, at least it's not wallowing in sadism.

However this common perception of horror literature is  most unfair. For although there have been legions of trashy paperback originals that indeed do aspire to read like all the most gruesome sections of a coroner's notes, these are not the classics that beloved in the field or indeed representative of the wide range of styles and subjects the horror tale has tackled.

Arguably horror is the most venerable of all genres in fiction. Indeed the very first work in English literature Beowulf, is an Anglo-Saxon epic detailing it's eponymous heroes battles with the night terrors that are Grendel and his even more monstrous mother. And undoubtedly the spooky tale told by the fireside stretches further back into the misty begins of human culture, right back to the most primitive times when the shaman woven tales of the gods and monsters as the shadows flickered on the ochre-encrusted cave walls. 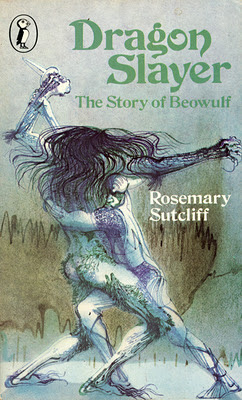 And since the bloody horrors at the great hall of Heorot, the horror story as attracted an impressive roster of literary talents. Throughout history, people have always enjoyed an eerie tale and therefore it should be no surprise that so many of the great masters of literature have penned an uncanny story or summoned up a ghost or two in their pages. Indeed Shakespeare is riddled with the supernatural; aside from the ghosts in Hamlet and Macbeth, his plays throng with reference to the invisible world and occult signs and portents. And the spectres resides at the heart of what in these secular times is increasingly the definitive story of Yuletide, Dickens'  A Christmas Carol. Furthermore even great figures from history outside literature and art, people as as diverse as Churchill and John Lennon, have add the the canon of weird tales.

Now this long standing appeal of horror is perhaps a subject for another day, and indeed, another article, but  my focus today is on the benefits of weird literature. For what my questioning guests fail to realise is that if it weren't for my love of horror tales, I would have never garnered the academic qualifications I now possess or now read so voraciously and widely.

In this week's HYPNOBOBS - #51 The House of The Nightmare - I recount how I first became drawn to the genre - long story story short - I was terrified of ghosts and turned my terror of the dark into a love of it by reading ghost stories. So then at a young age, I was scouring the library and bookshops for collections of the tales of the uncanny. And at that time, the late '70s and early '80s, the shelves were thronging with not just single anthologies of weird fiction, but whole series of volumes devoted to the genre. 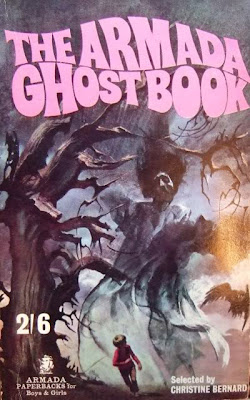 And through devouring the Armada Ghost and Monster books, the Fontana Books of Great Stories and the numerous collections put together by the legendary editor Peter Haining, I first encountered the works of genre greats such as MR James, Ray Bradbury, Edgar Allan Poe, Richard Matheson, and HP Lovecraft - all of whom became contestants for the title of Greatest Author Ever in my fevered monster-haunted young brain. And any title offering a tale by one of these gentleman was a tome to be procured post haste and, as Lovecraft so memorably put it in his sonnet Pursuit, "I could guess what nighted worlds of ill lurked in that volume I had coveted"...

But furthermore it was in the pages of such collections that I also first was introduced to the works of such giants of classic literature such as Dickens, Chekhov, Defoe, Kipling, Dylan Thomas, Aldous Huxley, EM Forester, HG Wells and Guy De Mauspassant, to name but a few. And having enjoyed their contributions to weird fiction, I began exploring what else they had wrote.

And so then when English Literature classes turned from worthy approved children's titles to the annals of great literature, I had no problem tackling, for example, the heavy Victorian prose of the likes of Thomas Hardy, for I was by then already well versed in dense vocabularies and archaic modes of writing. And having read  all the great gothic novels such as Dracula, Frankenstein, The Phantom of the Opera and Wuthering Heights I had no fear of long books with small type.

Now it is a most unfortunate state of affairs that the way that our education systems teach literature seems to have in the majority of cases, the disastrous effect of actually turning people off reading as a pleasurable activity rather than engendering a life-long love of books. And indeed, as sad as it is, it is more thanks to my love of weird tales that I am the well-read and (hopefully) intelligent man I am today than the efforts of my teachers, who ironically didn't approve of the horror volumes I was reading back then. However it is thanks to reading John Wyndham and Mr James at the age of ten that I have an appreciation of the works of Wyndham Lewis and Henry and William James.

Of all the genres of literature, few other categories of fiction can boast so many heavy-weight names in its ranks. And certainly horror opens the most doors, and as we have seen, not just cobwebbed swathed portal to nitrous vault either. But the most important portal it may open is the one marked 'Imagination', and to enjoy any story it must open this particular door.

A tale or novel may be as worthy as they come, but if they fail to engage the imaginative faculties of their readers, to paint pictures on the mind's eye and populate the mind with its characters, then there will be no pleasure in turning the pages. You may be as clever as you wish but if your book is dull, then not only will you ensure the reader will never finish it but possibly drift away from reading all together...

The imagination is a tremendously important force and it is through it's exercise that we have progressed as far as we have as species. And so to harness terror and dread that in themselves are some of the most harmful emotions to both our personal well-being and society, and to transform them into mighty engines of imaginative pleasure is one of the great virtues of literature. As Robert Aickman so wisely wrote in his introduction to the Fontana Book Of Great Ghost Stories -

Ghost stories are exercises of the imagination. Their importance lies partly in the fact that in all of us the imagination needs to be exercised, and today gets desperately little scope, so that society is in danger of madness in consequence...

Indeed as the philosopher Pascal famously observed the sum of evil in the world could be greatly reduced if men could only to sit quietly in their rooms. And frequent visits to the land of fiction is the ideal way to achieve this... 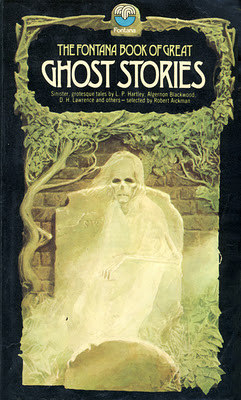 Other articles in this series can be found here -