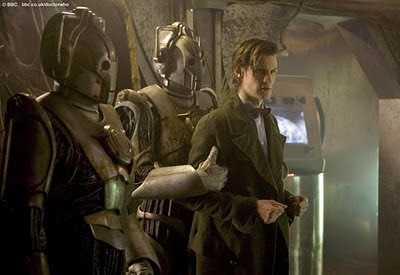 Well there's not too much to add to the spoiler-free review, however there are a couple of items worthy of comment!

Firstly, and perhaps most importantly for old school Who fans, was the return of the Cybermats! Now for those of you who don't know, these little cyber-infiltration units first appeared back in the Second Doctor era, making their début in the classic adventure Tomb of the Cybermen. 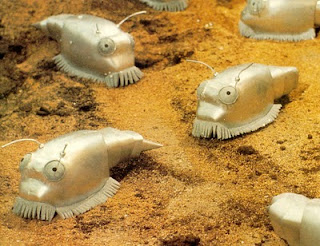 And despite looking insanely goofy with their googly eyes and oh-so-1960s antennae, the little critters proved such a hit that they quickly made a second appearance in The Wheel In Space. However despite an upgraded design (most notably the eyes were made, well, a little less googly), this was the last time we were to see them for quite some time, although apparently they were originally pencilled in to appear in The Invasion too. 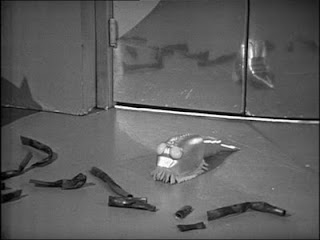 In fairness, however this wasn't due to the Cybermats being an unpopular creation, but due to the fact that the Third Doctor never tangled with the Cybermen (although one of the silver giants did appear in a cameo appearance as a denizen of the Miniscope in Carnival of Monsters and this Doctor did eventually battle them in the 1980s reunion story The Five Doctors).

Cyber-appearances were thin on the ground too during the Fourth Doctor's reign. However Tom Baker did encounter them once in his first season in Revenge of the Cybermen and the Cybermats were back too, albeit with a radical redesign... 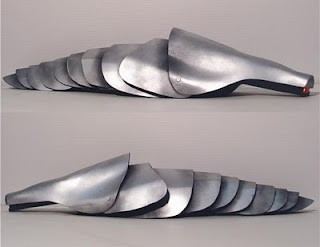 ...Yes, I know, they do now look like some species of hideously prehensile martial aid!  I'm not sure I should mention that their prime function in this story is spreading diseases... Anyhow, moving swiftly on! The Cybermen would return to plague to the Fifth, Sixth and Seventh Doctors, but sadly they no longer brought their pets with.

However the Cybermats would make reappearances in various Doctor Who audio dramas, novels and comics - evidently the concept of the Cybermen having these quasi-animals, and perhaps those googly eyes,  hold a deep appeal. So then, it was really only a matter of time before they made a reappearance in the new series - they'd been mentioned in The Almost People and played a part in the adventure game Blood of the Cybermen, so the stage was set to bring to a new audience. 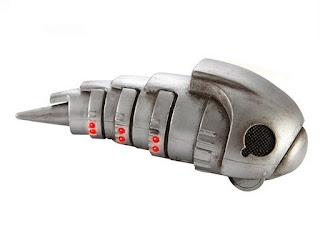 The new design is a nice synthesis of the previous versions, but with a rather pleasing though somewhat disturbing twist - a set of very organic and nasty looking teeth! Not only did the reveal of these biological components provide a decent shock for Cybermat lovers old and new but also was a rather well thought-out  addition, as the Cyber-race are flesh and steel cyborgs after all.

And I think it safe to say these little beasts have proved to be a big hit, and not only with old fans who are delighted to see them back in a cool new form, for it looks like a toy Cybermat will now be top of many children's Christmas lists this year *.

So then, moving on from silver rats, the other issue for this Spoiler Zone is the possible niggle I mentioned in the previous review, which I can now reveal concerns the final confrontation with the Cybermen. Now the fact that the silver giants were defeated by an emotional overload has had alot of folk rolling their eyes and muttering about a sentiment over sense RTD style ending.

However interestingly, I've noticed that this finale seems to play out better with viewers who have children, and this is a key point here. For while it is something of a scifi cliché that the cold hostile machines are defeated by a surge of human emotions, the strength of the parent-child bond is a far more valid source of feeling than say, the Tenth Doctor's affection for Rose. Firstly there's a subtle but rather nice all the same thematic parallel woven into the plot - basically it's human reproduction versus Cyber reproduction.

And secondly this pay-off is set up carefully in the story, rather than just chucked in for some sentimental fireworks  - for example the climax of The Satan Pit and the Doctor's out of the blue "I believe in her!" routine. Yes, it's still sentimental but it's alot more profound than the Doctor and Rose sitting in a tree K-I-S-S-I-N-G or his Tinkerbell return from Gollum in The Last of The Time Lords.

Thirdly, it's not like the Cybermen haven't been defeated like this before.Essentially Craig overloading their emotional circuits is a callback to the old Cyber-classic The Invasion, where Tobias Vaughan's cerebratron  mentor device does exactly the same thing. And certainly it's far better than the late period original series Cybermen who were immune to most weapons but promptly fell over when encountering  a small amount of gold!

But all that said, I do have a quibble with it. And it's simple that this final confrontation in the Cyber-ship just feels slightly too rushed. As I've outlined above the defeat by emotional overload is played for and won in the plotting, however I think the reason it doesn't work for some people is the fact that it plays out so quickly and hence can come across as an RTD magic trick deus ex machina.

Now I've said it before, and no doubt will say it again, but I really do think that Doctor Who needs it's running time extended to a full hour. And those extra ten minutes, would give the stories that bit of extra breathing space to retain all those little moments that can help to build dramatic weight. Now in the case of Closing Time, I don't necessarily think the episode needs another ten minutes, but I got the distinct impression that the Cyber-climax was hurried to make room for the coda which sets up the big season finale.

And speaking of which, these closing scenes certainly seemed to smooth over any feathers ruffled by the Cybermen's demise. So it is River is the Astronaut! And what;s this in the Next Week preview - Pterodacyls! Pyramids! Daleks!

I suspect the next spoiler-free review is going to be a bugger to write...

* And probably a great many folk in their middle years too :)

This is the closest I've come to a squee since the reboot brought back old favourites. I could never have predicted how chuffed I would be to see the Cybermats back :-)