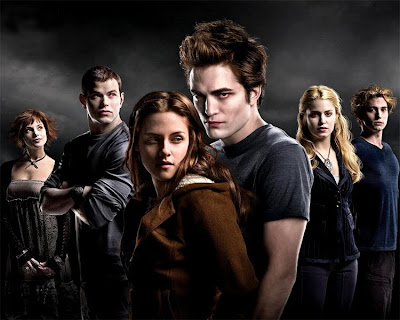 Currently, the vampire, that glamorous creature of the night, is in rude health; if you are at all interested in genre material or even just an avid consumer of pop culture, at the moment everywhere you turn, you’ll find a bloodsucker or two. Of course their present ubiquity is largely down to the series of novels by Stephenie Meyer, the Twilight Saga.
Now these hugely successful books and the subsequent movie franchise have spawned a massive and rabidly devoted fanbase, boasting numbers that go beyond a mere cult following and can legitimately be called a phenomenon. However not everyone is as enamoured by Meyer’s sparkly vampires and indeed many unaffected by the spell of the Cullens have been very dismissive of the books, films and their devoted fans.
Of course, decrying such a phenomenon, rubbishing the material and poking fun at the fans, is nothing new, particularly if it’s emanating from one of the fantasy-based genres. And much like the Harry Potter whirlwind – arguable the parent phenomenon for Twilight - there’s been no shortage of armchair critics keen to proclaim to the world that it’s a vast morass of badly written tosh and poorly made movies, and that generally getting very, very annoyed that the whole shebang is so popular.
However there’s a key difference in the reaction to the ascendency of Meyer’s creations to JK Rowling’s, and that is while the latter has been mostly defended in geek circles, in the case of the former, usually fantasy-friendly types have waded in, tooled up with critical stakes and hammers, alongside with the mainstream pundits. Indeed that usually staunch ally of the undead, the horror world, has generally sported the same nose wrinkling disdain and disgust one sees when a serious rock fan encounters Justin Bieber, or when the average man in the street steps in what my uncle used to call a ‘dog egg’.
Is this hostility justified? Is the Twilight Saga really something to scrapped off the soles of the sneakers of pop culture? Or is a case of artistic snobbery, that old story that goes if a certain work proves to be insanely popular with the young and/or wins a legion of female fans, then it’s automatically empty, vacuous and fully deserving of the torrents of contempt vomited upon it by the ‘serious’ devotees of the art?
As so often is the case in such critical spats, there’s been a deluge of venom from folk who have never even read the books or seen the films. But to readdress the balance and uphold the honourable maxim of “if you ain’t seen it, you can’t slag it”, the Boys from The Black Dog Podcast, Lee and Darren, those brave explorers of le cinéma merde, decided to chart a course into the shadowed realm of the Twilight movies. Having not seen any of these myself and being a loyal Black Dogger, I couldn’t let our heroes journey into the night alone…
And having watched all three movies produced so far, I discovered I had far more to say than could be encapsulated in the usual piece of audio feedback. So as a companion piece to the Black Dog marathon, here are my results of my own vampire autopsy in full...
The Anatomy of A Vampire
Vampires have been with us for a long time, indeed tales of predatory supernatural beings that drain life or suck blood abound in nearly every culture and stretch back to our earliest legends. And indeed Twilight is not the first time a craze for all things undead has swept the Western world. While many regions have their own tales of vampiric entities, many are somewhat different to the vampire we are familiar with, as you may see here. And it wasn’t until the 18th century, that the vampire as we now know him, became a cross-cultural figure. In the 1720s, many newspapers carried reports of vampire epidemics in Eastern Europe (for example this case) and soon the salons of Europe were a-buzz with discussions of these strange reports. Intellectuals of the day debated the possibility of beings rising from their graves to menace the living; with volumes and treatises with titles such as De Masticatione Mortuorum in Tumulis Liber (‘The Book of The Chewing of the Dead in Their Tombs) appearing, and the likes of Rousseau and Voltaire weighing in on the debate.
But while the titans of the Age of Enlightenment found little in the accounts of vampires to detain them for long, the popular imagination thrilled to the tales of these nocturnal predators and soon the diverse folkloric beings such as the English Revenant, the Teutonic Alp and Irish Dearg-Due were being shuffled into the shade of the vampire umbrella. And it wasn’t too long before the vampire was beginning to appear in art and fiction.
And though it would take another century or so before the fictional vampire would begin to take on all the characteristics we know today – for the undead of folklore are markedly different from their print and screen cousins – the forebears of the Count and his undead brood are clearly recognisable is the first media they appeared in, poetry. And in the context of Twilight it’s worth noting that these vampiric verses, from the early The Vampire by Heinrich August Ossenfelder to the later Bride of Corinth by Goethe, featured a strong romantic angle rather than being poetic tales of terror. 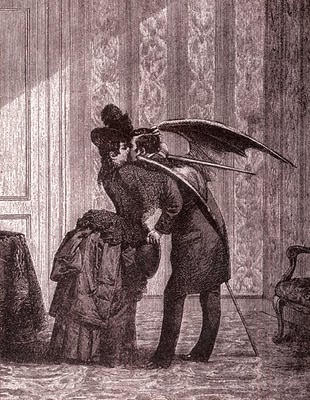 The Vampire's Kiss by Max Ernst
Similarly when the vampire began to appear in dramas and in prose, they were often rising from the grave not just to drain life but to seduce their victims. And it’s not until the 19th century, do these fictional undead start blood sucking, breaking into bedrooms and generally becoming more Satanic than erotic. Indeed the turning point at which the vampire has fully metamorphosed from a fantastic romantic figure into a blood soaked horror is Stoker’s Dracula.
Now the point of this little (un)natural history of the vampire is to demonstrated that far from being a corruption or watering down of an iconic creature of the night, the treatment of vampires in Twilight is actually a return to their earliest fictional appearances. And let’s be frank here, a large proportion of the bile spewed in the direction of Meyer’s creations is down to the fact that many see her romantic focus as being just plain wrong for vampires.
But romance and eroticism has always had a place in vampire fiction, and lest we forget Twilight is next logic step on from two of the more popular recent entries in the undead genre; Edward Cullen is clearly the bastard son of the decadents found in Anne Rice and his tangled relationship with Bella has an obvious precedent in the romance of Buffy and Angel.
Indeed considering how long and strong this vein of romance runs in vampire fiction, I’m frankly amazed something like Twilight that places a relationship with a vampire in the milieu of teenagers, and emphasises love over horror, did not come along decades earlier.
So we can stake this major objection to Meyer’s franchise right here and now and leave it to die screaming in the light of dawn. There’s nothing wrong, heretical or blasphemous about the so called paranormal romance of Twilight - tenderness is as part of the vampire’s fictional make-up as is the Satanic evil of Count Dracula, or the inhuman brutality of Brian Lumley’s Wamphyri.
And with that stumbling block well and truly demolished we can proceed to the film with unprejudiced eyes…
NEXT TIME – Three films, one man, no hope!
Posted by Jim Moon at 19:29