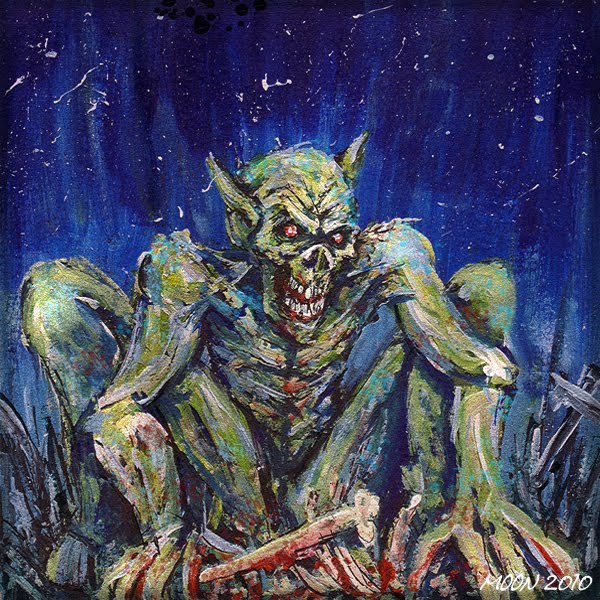 Join Mr Jim Moon once more by the fireside for some talk about ghouls, the original cannibalistic humanoid underground dwellers, and a reading of HP Lovecraft's classic tale Pickman's Model

Dig For Victory - The Glory of MINECRAFT ! 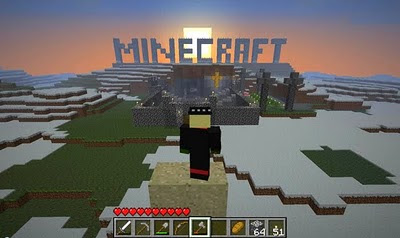 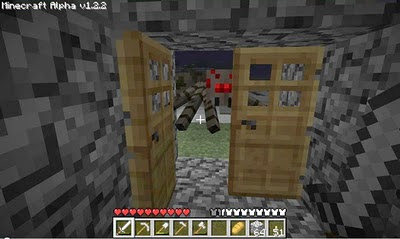 "Sod off! I'm trying to build an aqueduct!"
When you die you respawn and there are no limits to the amount of lives you have. Now some might say that this effectively takes away any challenge, but believe me dying is to be avoided. You see, when you die you drop all the equipment and goodies you’ve gathered, which is a major pain when you’ve worked for ages to create some high quality armour and diamond tools and are loaded to the gills with precious materials. Usually most of it will be lying at the site of your death to pick up again but it is a major headache to reclaim it if that location happens to be far away from the fixed point where you always respawn and/or in an area crawling with monsters.
But while the assorted monsters provide the necessary degree of challenge for a good game, the real fun comes with the creativity. To begin with, a tremendous amount of imagination has gone into the game design, such as a very clever system of crafting different items by combining them in different patterns on a 3 x 3 grid in the inventory. And in terms of gameplay, it’s great fun to try out different combinations of things to and see what appears. But also the game really fires your own imagination – once you get your living arrangements sorted out, do you want to go exploring, delve into dungeons, start farming or perhaps build a giant statue of Homer Simpson?
The genius of Minecraft is that you can do all these things and more. It combines the best elements of RTS, god sims, first person shooters and RPGs but also manages to be a canvas for your creativity. And almost equally addictive as the game itself is looking online at what other people have created in their blocky Edens. YouTube is awash with videos of folk showing off their endeavours - for example, here's a fellow who is building a 1.1 scale replica of the New Gen Enterprise! Impressive stuff to be sure but this team project - a recreation of York Minister in Minecraft - is even more breath taking. Check out these shots - here's an exterior view and this is the choir and altar inside. However to see really see the full beauty of this epic Minecraft construction, check out this video that shows it's construction and tours the finished edifice. It is truly incredible what wonders you can create in this game!
One word of warning however, Minecraft comes with no instructions and you will need to regularly consult the Minepedia wiki to identify items you’ve found or things you’ve encountered. However I’m sure that eventually the game itself will incorporate a tutorial and tool tips. So then, when starting out I would recommend checking out this First Night Survival Guide.
Also if you want to see the game in action and gains some handy advice for how to play, I highly recommend watching SeaNanners' series of Minecraft videos on YouTube. Not only are they are wonderful introduction to how the game plays and a great source of tips, they are also highly entertaining, and often hilarious. 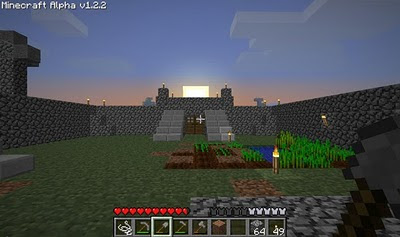 Dawn chez Moon
As I said earlier Minecraft still isn’t actually finished. However it is still fully playable, with the updates being tweaks and additional fun stuff. For example, a major update was released this Halloween which along with adding the ability to make jack-o-lanterns out of pumpkins, introduced a whole other dimension, the Nether to travel to via magic portals. This spooky realm is the Minecraft equivalent of Hell - full of new strange creatures and resources.
And if you do buy Alpha, all subsequent updates and upgrades are free. But as the game is still being developed, Minecraft is currently going for half price which is just under a tenner. Now this is an absolute bargain, but in all fairness, it will still be a steal at £20 when it’s finished.
Why? Well it’s simply the sheer amount of time you can lose playing this game – these days most big name games are often only delivering 20 or 30 hours of gaming before the story runs out. But with Minecraft, as it’s a sandbox game, the only end is when you’ve decided you’ve had enough, and oh boy do you get a lot of game time out of Minecraft - I’ve only had the purchase version for four days and already I’ve had well over 30 hours of gameplay out of it and I’m still just getting to grips with the basics of the game!
But aside from delivering the very best value for money, Minecraft is just an absolute joy to play. I don’t know about you, but I’ve found that over the years increasingly mission and level based games often end up uncompleted in my hands for the simple reason that after a while the game just starts to become more a chore than a fun challenge. Let’s be honest, often in a shooter or RTS you end up wishing they’d just ditch the *ahem* story line, which seems to involve each progressive level becoming more of a massive pain in the arse, and just let you play with all the toys in the game world.
But Minecraft let’s you completely off the leash, with the great god Notch giving you a world of your very own and saying ‘Go ahead, play!”. You make your own story in this game, and whether it turns out be a tale of being the architect of wondrous castles, a farmer, a delver in the dim secrets being the earth’s crust, or even a landscape artist, it’s never anything less than complete fun.
Call me cynical but the bigger the games market becomes it seems the less game content we are being delivered - as games studios always have their eyes on flogging you an expansion pack or a revamped version the following year. Minecraft feels like a return to the simpler values of old – born of a desire to create a fun filled game that you can happily play with for weeks rather than just a handful of hours. And this desire to simply make an excellent game shines through in the myriad ways you can amuse yourself in a world of brightly coloured blocks.
In short, Minecraft is a real triumph of rewarding gameplay over flashy gimmicks, and proof that one man with imagination is still more than a match for bloatware titles made by vast development teams. It’s also a massive victory for independent development and distribution. But perhaps best of all Minecraft is a gigantic win for gamers everywhere.
*”Put your slippers on!!!” – my Mum, virtually every day as a nipper
Posted by Jim Moon at 16:09 No comments:

So asked FILM INTEL and here's our anwser!
Right then, GREEN LANTERN looks fun but we're really not sure about the suit - CGI aside not entirely sold on the dark green.

RED RIDING HOOD looks pretty but doesn't seem to have captured a proper medieval tone - all seems a bit music video! We suspect the words 'missed opportunity' may figure heavily in reviews...

YOUR HIGHNESS however looked far more like a proper ye olde fantasy world and contrast with the foul mouthed humour worked well. Yes we laughed alot and are looking forward to this one! And we sure we're not alone in that it brought memories flooding back of teenage D&D sessions.

Clear winner though had to be COWBOYS & ALIENS. Looks gorgeous and a lot more intriguing than the lazy sounding mash-up titles suggests. This could be the best genre hopping Western since VALLEY OF GWANGI! 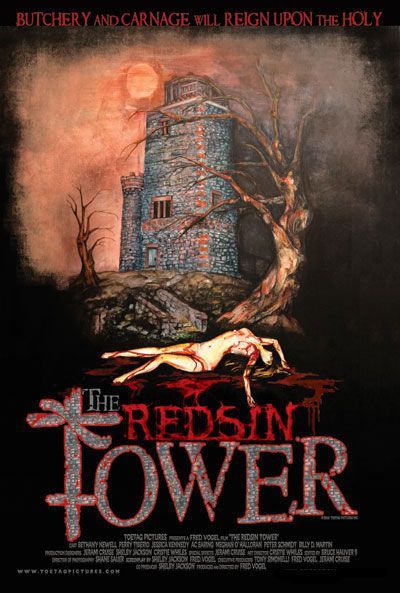 Mr Jim Moon takes a look an underground horror flick from the infamous Toetag Pictures ... So ladies and gentlemen, please take your seats for a tour of The Redsin Tower... 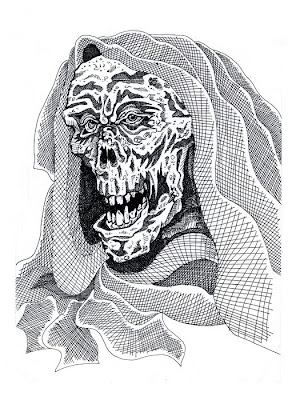 As Mr Moon has been poorly this week, here's a sketch inspired by The Creep, from the classic King & Romero anthology flick Creepshow, to be going on with until either a new 'cast or slab of rambling appears.

Abnormal service will be resumed shortly...
Posted by Jim Moon at 10:15 1 comment: 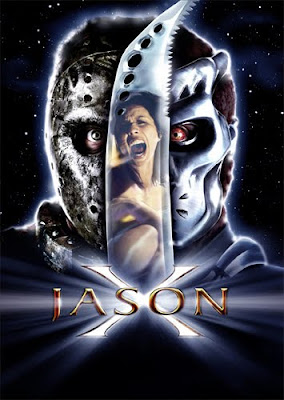