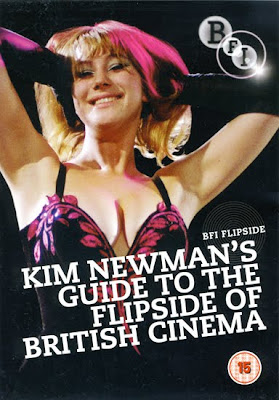 To film buffs Kim Newman probably needs no introduction. However for the rest of you, he’s a well respected UK critic and broadcaster, whose astonishing knowledge of cinema and distinctive dress sense have graced many a documentary and has penned countless books and articles on film and television (visit his site to see exactly how much this gentlemen has produced over the years.

However Kim is also a dyed-in-the-wool fan of genre fiction, whether in print or on screen, and his erudition and incisive wit has made him one of the most intelligent and entertaining commentators around, and needless to say much respected in this parish. So naturally when I discovered that the British Film Institute was releasing a disc entitled Kim Newman’s Guide To The Flipside of British Cinema, the credit card was out before you could say “Overdraft limit? What overdraft limit!”

But thankfully, for my own and my bank manager’s blood pressure, this documentary was to be released with an RRP of £1.99, and is only available at the BFI store or at HMV.The disc is part of the BFI’s Flipside releases, a line of obscure British film titles, remastered and released on DVD and Bluray, and this particular entry, numbered 000 in the Flipside catalogue, serves as an introduction to this continuing range of reissues.

So then this is a sampler disc, but what you get for your money is –

Now don’t panic if you’ve never heard of many of these titles, as Kim himself hadn’t before becoming involved in the Flipside project. However despite some of the films being new discoveries, he still as passionate and erudite as ever.

In Simon Winder’s idiosyncratic socio-cultural survey of James Bond through the decades, The Man Who Saved Britain, during a tangential ramble about obscure film retrospectives, he remarks -

In practice there are no entirely rubbish films: that there really are pleasures of design, dialogue, atmosphere, narrative that are unconquerable - and that these pleasures mutate and mature over time in unexpected ways. A worthless 1950s American comedy becomes a dazzling parade of clothing, slang, sexual expectations, sofa colours, cocktail choices and glimpses of city streets, all virtually invisible to its makers and to its first time audiences. A banal, production-line Weimar Republic slice of life drama teems with buildings, faces, aspirations, worries, pleasures all preserved effectively by magic, sheltered forever from any knowledge of Hitler’s rise to power.

And this is pretty much the same tack Kim takes in looking at these films. Yes, they are often exploitative flicks or failed experiments but despite all their short comings, but he presents a convincing argument for the worth of these forgotten gems. Whether we are talking about a rare non horror outing for cult director Pete Walker (Man of Violence), a rock satire from Peter Watkins, director of the controversial and long banned The War Game (Privilege) or Spike Milligan’s surrealist comedy take on a post-nuclear apocalypse world (The Bed Sitting Room), Newman argues enthusiastically that somehow these films capture elements of the Britain of the time that have eluded the accepted classics of the period.

And it is the fact that there is a thesis of sorts explored and illuminated throughout the running time that elevates the production way above the usual taster disc fare. Rather than playing as an extended advert, this feature can stand up in its own right as a film documentary which shines a spotlight into what Newman convincing argues is a neglected and too long overlooked area of British film.
However that said, by the end of the feature there will be at least several titles to add to your must see list. Indeed I can see a good chunk of cash disappearing into the BFI coffers over the next few months.

Carousella (1965) – a 25 minute short documentary about Soho strippers which was banned on its first release by the British Board of Censors as head scissor man at the time John Trevelyan believed it was far too positive in its portrayal of the exotic dancers and feared it would serve as a recruitment film for the stripping scene.

However in truth what we have here is a remarkable modern piece of documentary film making. Rather than an austere and patronising look at the world of the stripper; the likes of which was so well parodied by Harry Enfield in his Mr Chumley Warner sketches, what we have is an honest and remarkable non-judgmental documentary that never feels exploitative or leering. Inventively shot in gorgeous black and white, Carousella draws from the nouvelle vague in its construction and tone. And in drawing its inspirations from the likes of Truffaut and Goddard, the film has aged remarkably well. Indeed its positive portrayal of the girls still feels somewhat fresh and novel as even today a documentary about stripping would still lean heavily towards depicting the crime, misery, vice and violence in the world of adult entertainers.

The Spy’s Wife (1972) – a half hour supporting feature directed by Gerry O’Hara, one of the featured directors of several other Flipside releases. If the Harry Palmer films were an attempt to show a more realistic view of the world of espionage than the Bond franchise, then The Spy’s Wife is the next logical step – an offbeat and down at heel view of the secret agent’s life. It’s a slight but entertaining little tale with a cheeky twist end. It’s beautifully shot and shows O’Hara’s directorial skills to good effect – certainly it made me interested to check out his full length features in the range. It also boasts a fabulous period soundtrack – you know the sort of thing; all walking bass lines, tom toms and twanging electric guitar riffs. If you know your Alan Hawkshaw from your Keith Mansfield, or are a regular visitor to the marvellous Score Baby! site, this feature is worth your time purely for the music alone.

Tomorrow Night in London (1969) – a 5 minute film showcasing the delights of Swinging ‘60s London produced by the British Travel Board to promote tourism. They used to do a lot of this kind of thing, and often ended up deeply ironic – an example most film fans will be familiar with is the old footage at the beginning of the The Full Monty - or unwittingly hilarious such as the infamous Telly Savalas Looks At Birmingham (thanks to Paul from Chinstroker Vs Punter for introducing me to this gem of mendacity). However Tomorrow Night In London is sadly lacking in such unwitting comedy, and is simply a montage of London’s social scene set to music. And of all the bits and bobs on this disc, it’s easily the worst visually, with a lot of print damage and tramlines throughout. However it does highlight what a splendid job the boffins at the BFI have done in restoring the other flipside offering, and I daresay lovers of kitsch will probably find something to enjoy this short offering.

Trailer Reel - And finally the disc rounds off with trailers for all the titles so far released in the Flipside imprint.

All in all, this is a fine little disc, an entertaining trawl through the quirky and murky waters of British low budget film in ‘60s and ‘70s. And for the rock bottom price, you really can’t be robbed – although it may well lead to a significant outlay when you start collecting the other titles out on the range. See you on the flipside!