Friday 13th Retrospective Part 5 - The Beginning of the End? 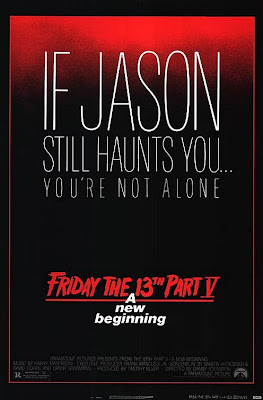 The year is 1984 and Jason is dead once more. However after The Final Chapter raked it in at the box office, in a textbook example of money talking, Paramount decided that the franchise should continue. Hence a year later Friday 13th Part 5 – A New Beginning hit the theatres. And lo, the fans were delighted…

…Until they saw the movie, that is. And then the howls of protest and outrage were loud and long. Louder even than the censorious moral guardians who wanted such films banned. So loud in fact, that my sources in NASA inform me that they can be now heard on Saturn, and officials at CETI are concerned that the first thing an alien civilisation will detect from us is the cryptic message “Fuck Roy!!!”.

Yes, this is hands down the most unpopular film in the series and is routinely nominated as the worst film in the franchise. The director, one Danny Steinman, never helmed another feature and, I’m guessing is this glancing over his shoulder for irate machete toting Jasonites. And what is the reason for all this ire? Well, this episode of the saga doesn’t feature Jason as the killer. He appears but the film has a twist ending in which it is revealed that the slayings have been committed by a copycat killer, the afore mentioned Roy, whose significance is puzzling the scholars on Yuggoth even as we speak.

In hindsight, you can understand the intentions behind the decision not to feature everyone’s favourite slaphead as the author of the carnage. The first movie after all famously didn’t feature Jason as the killer and in this instalment they were attempting to recreate the same murder mystery vibe of the original. They figured as long as there were plenty of killings and some nudity ‘da kids’ would be happy. And though these elements are undoubtedly a part of the appeal, however what the studio failed to appreciate was the popularity of Jason himself.

And there was a precedent for this, which considering its source is harder to understand why the makers of The New Beginning overlooked. In 1982, Halloween 3 – The Season of the Witch was released which bombed appallingly when movie goers found out it didn’t feature another round of stalk and slash with Michael Myers. Screen Nigel Kneale (who asked for his name to removed from the film after they bastardised his script) has a rather telling story about its production –

I said ‘Don’t you want some kind of suspense at the beginning? A zero point from which to build?’ ‘Oh’ no,’ they said. ‘You must start tearing off heads off. We’ve got to keep faith with the kids’.

However as Universal bosses discovered the kids actually do care about story and character, and all the head ripping in the world would not compensate for seeing a sequel that had no connection to the previous two films and didn’t feature the villain they’d paid to see.

While The New Beginning does clearly establish that it is a continuation of the Friday 13th saga by making the Tommy Jarvis character from The Final Chapter its focus, really the audience reaction to a Halloween movie sans The Shape should have really flagged up the fact that not having Jason as the killer would not go down well.

But in all fairness, the movie does deliver more Jason action than it is usually credited with. To begin with, it opening with an excellent scene depicting a returning Corey Feldman witnessing two chuckleheads fresh out of Lobotomy High (where all slasher teens go to school) digging up Jason’s grave and prompting receiving a machete thank you from the worm riddled revenant. Later on we get equally creepy scenes where the grown up Tommy (now played by John Shepherd) is haunted by visions of Jason.

Most of the killings however are shot in such as a way as to keep us guessing as to who the killer really is. It is not until the last 20 minutes we see that the murders are being carried out by what appears to be a returned Jason.

And this is the problem - it’s not that there’s no Jason in this flick – it’s that fans just weren’t happy to discover that the Jason on screen was not the real McCoy, but the Real McRoy, your friendly neighbour psychopathic ambulance driver.

Now considering the very negative reputation this movie has garnered over the years, I was somewhat apprehensive when cracking open the jewel case for this one. I’d only half seen once before it, many moons ago and what I remembered didn’t inspire with confidence: indeed the only thing I remembered with anything approaching clarity was the infamous outhouse scene. The outlook was bleak but what the hell, I’d survived Part 3…

And I was actually very surprised by The New Beginning. Admittedly it’s not the greatest entry in the series – the script is patchy, the characterisation thin and the logic behind the mystery of who’s doing the killings owes more to Scooby Doo than Agatha Christie. But I was rather entertained from start to finish. Sure it’s as dumb as a bag of hammers but it was nowhere near as awful as I expected.

Steinman, while not having much in the way of directorial flair, keeps the film zipping along at a tremendous pace. With a high body (twenty by my count) you’re never much more than five minutes away from the next piece mayhem with some inventive kills (road flare in mouth, leather strap around the head) thrown for good measure. Any characterisation is quickly sketched in between the action scenes and considering the swift production of these films that’s probably a good thing – characters simply don’t have the screen time or enough lines to highlight the deficiencies of either the actors or the script.

And actually there are some good performances in this movie. Though often slammed by fans, John Shepherd puts in a great turn as the disturbed and mentally scarred Tommy and achieves a lot considering his character only has twenty four words in the entire flick. And Shavar Ross (better known to the world as Diff’rent Strokes’ Dudley) keeps plays Reggie the right side of brat, and plays well off the rest of the cast.

While Steinman may be best categorised as capable and competent, he does have some good tricks up his sleeve. There are plenty of call backs to the previous films, such as impalement from below, a body in a bunk bed, corpses both nailed and thrown through windows, a battle in a barn and rain soaked finale. It seems like the script is really trying to prove its Friday credentials.

Another touch I particularly liked was the fact that Roy’s hockey mask is actually different from Jason’s – sporting two blue triangles rather on large red one. And interestingly it’s in this movie that the slow walking, slow stalking Jason first appears. Up until now he’s galloped about the place like a homicidal Duracell bunny, and it’s in The New Beginning he gains his iconic form of locomotion. It’s somewhat ironic as it’s not Jason at all…

Which brings me to the whole matter of the twist ending. Now I can’t really judge how effective the murder mystery element is as I was well aware that the killer was Roy before the film’s original theatre opening in the UK. On the plus side though, the film doesn’t actually cheat like the original did by revealing a character we previously hadn’t been introduced to. On the down side though, the exposition from the Sheriff detailing Roy’s rationale doesn’t really add up – from the sound of it we are meant to believe that Roy went on this murder spree to avenge the death of his estranged son Vic. But if this is the case his choice of victims makes little sense, as he seemingly targets several people not connected with the youth care centre. A better interpretation would be that his son’s murder has unhinged him and inspired him to take a leaf out of Jason’s book, and kill every damn thing he meets.

However I suspect the sloppy rationale isn’t the real problem for those who loathe this entry in the series, and furthermore I’d guess that if the movie had had Tommy revealed as the killer, it would still play badly with the fans. The real trouble simply is the feeling of being let down and ripped off when you discover that it isn’t the real Jason after all. And arguably Steinman made a rod for his own back here; the atmospheric dream resurrection that opens the film and the ghostly Jason plaguing Tommy are so effective, fans were set up for the real Jason to rise from the grave.

And the close of the movie is somewhat botched. It’s put together effectively enough but the final scene of Tommy donning the hockey mask is just echoing the close of The Final Chapter with its shot of a positively psychopathic looking Corey Feldman, and leaves you with a sense of being back to square one plot-wise. Did they really think we’d accept Tommy Jarvis as a new Jason? It’s hard to see where they were going to go with this and thankfully the film’s poor reception ensured that this direction was never followed.

I don’t know whether it’s because I went into this already knowing the twist or simply because I had my expectations set to ‘gutter’ that I enjoyed this episode in the saga. I even enjoyed the outhouse scene, which like the grungy rednecks Ethel and Junior, is there purely for a spot of comedy. It’s not a perfect film by any means and it’s not even a stand out entry in the series. But at the same time it’s nowhere near as bad as Part 3, and if you can put aside quibbles of the real Jason being missing in action, it’s a fun way to pass eighty minutes if you are in the mood for some standard slasher fare.

Finally though, there is a certain irony in that The New Beginning was so poorly received that it nearly finished the franchise. As we will see next time, the next instalment Jason Lives would have to fight its way out of Part 5’s long shadow…