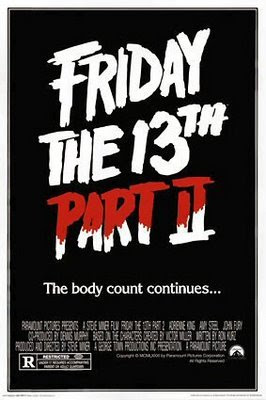 When Friday 13th opened in theatres the critical response was pretty much unanimous – Cunningham’s movie was derided as a new low for cinema. One reviewer, in an act of ass-hattery that today would lead to serious legal action, even published Betsy Palmer’s home address and instructed his readers to send her hate mail for appearing in such a tawdry flick. Critics loathed it, self-appointed moral guardians condemned it, and parents were outraged. But the kids loved it and box office returns far exceeded the dreams of its makers.

So naturally a sequel was quickly put into production. Interestingly, the original idea was to make a movie unrelated to the first but hinging upon another tale of terror taking place on the titular date – a concept that would later be attempted by the Halloween franchise with the much-maligned Halloween III – Season of the Witch. However this idea was swiftly vetoed and studio bosses, no doubt with an eye on the success of 1980’s The Empire Strikes Back, decided that continuing the story was a better option. And it was producer Phil Scuderi who came up with the idea that the sequel should centre around Jason…

It’s often claimed that this franchise simply remade the same film over and over again. But Friday 13th Part II does differ from the original; admittedly it’s not wildly different – it’s still basically teens die screaming with sharp things in their heads – but the formula has evolved. There is no attempt at a murder mystery plot here; an early scene sees Paul recounting the legend of the Crystal Lake killings, leaving the audience in no doubt that the unseen killer in the prologue was Mrs Voorhees’ little boy. And while we still get the POV shot games, we also get to see Jason with an Elephant Man style bag on his head carrying out the killings.

And Part II adds the missing term “masked killer” to the slasher equation. In this respect, it could be said that Part II is actually more of a Halloween rip-off than the first is. Certainly in losing the whodunit angle, we have a movie that far better fulfils the original’s remit of doing Halloween but with extra gore.

However just as the first movie drew more on Psycho than Carpenter’s film, Part II also delves further back into horror history and borrows from The Texas Chainsaw Massacre. There's some minor lifts in that, like Tobe Hooper’s film, Part II features a wheelchair bound character that nicely breaking audience expectations, gets killed. And final girl Ginny even attacks Jason with the iconic power tool. However it's the last act’s extended chase sequence through the woods where you can really see the Chainsaw influence.
Now the 2009 remake did pick up some flak from fans who felt that Jason was being turned into Leatherface. But in this film, Jason’s debut as slasher, there are clear parallels with Hooper’s psychopath. To begin with both are essentially scary rednecks and are both characterised as being child-like to the point of retarded. In terms of movement, Jason resembles Leatherface far more than Michael Myers - another common complaint about the remake was the fast Jason, but in this film he runs and scrambles after his prey. Finally his tumble-down shack in the woods with his mother’s decayed head on an altar surrounded by corpses echoes the death fetish décor of the Sawyer’s home.

It’s quite interesting to note how different Jason is in this movie. His portrayal as a degenerate backwoods psycho, complete with dungarees, plaid shirt and special pitchfork attacks, is a far cry from the calm killing machine of later films. The sack he wears may not be as iconic as the hockey mask but it is marvellously suggestive – the fact that there’s only one eye hole cut in it really has you wondering what the hell is under there. But importantly, this treatment of the character conveys the sense that Jason is a seriously mentally defective man, and this edge of reality makes him all the more very menacing.

And because Jason works so well in this incarnation, I quite understand why they retained so much of it in the remake. As we’ve already seen several criticisms stem directly from the influence of this movie’s Jason, and there is one more that needs to be mentioned. In the 2009 version, Jason uses the occasional traps, which have had fans howling in protest. But I would direct you to Scott’s death in Part II – after his stalkery clothes stealing, he blunders into a rope snare which leaves him hanging upside down and promptly gets his throat slit. Now although in his dialogue, he blames Paul and ‘his wilderness bullshit’, I think there’s a case to be made that Jason laid the trap. Firstly, the training courses haven’t actually started yet and it makes no sense for Paul to leave traps randomly lying around the camp. And secondly, this movie is big on set ups – plot devices such as the spear, chainsaw and Ginny’s unreliable car are introduced well before time – hence I tend to think that if we are expected to think that the rope trap was set by Paul, we’d have been shown it being done.

But what of the movie itself I hear you cry! Well new director Steve Miner, a man with a career that can only be generously described as patchy, acquits himself pretty well. The pace of the movie is noticeably quicker and slicker than its predecessor. The original runs at a typical 1970’s pace with a long set-up before the mayhem begins. However Part II kicks right into the action with the prologue where Jason despatches Alice. Operating at classic slasher tempo, you are never too far away from some action, with Miner steadily building up the pace and delivering a thrilling 20 minute finale with Jason hunting down Ginny. And like Cunningham before him, he lenses a lot of shots that convincingly emphasise the wilderness setting, hitting that important sense of isolation.

The killings are effective though there’s nothing as memorable as the deaths of Kevin Bacon or Betsy Palmer in the first film, which I suspect was more to do with concerns over the MPAA than Carl Fullerton replacing Tom Savini. And even so, cuts were made to ensure the movie got a certificate. I don’t know whether it was due to the censoring of the kills, but Miner has the final shot of the kill scenes burn out to white which is a nice stylistic flourish.

Also I think on balance that the characters have more depth than the first movie and the performances are a cut above too. Now obviously we’re not talking Mike Leigh stylings here, but they behave more like real people than the average shreddie, and the script does attempt to make the kids likeable (something we’ll be seeing a lot less of in future instalments). Ginny (Amy Steele) in particular is an excellent final girl, who instead of the usual hapless falling over and screaming, demonstrates courage, intelligence and determination. The final face-off between her and Jason in the shrine to Mrs Voorhees is sheer class - her stratagem to defeat him by impersonating his mother works well as the script has bothered to flesh out her background in child psychology.

Among fans, it’s often a toss-up between this and the first for the crown of best Friday movie. Indeed, many prefer Part II for it’s quicker pace, higher production values and scary depiction of Jason. Personally I think it’s nearly the better film but for a couple of niggles…

First up there’s the oft debated question about Jason. Is he alive or dead? In the context of this movie (and despite later instalments appear to contradict it), I think you have to conclude that he is alive and his appearance at the end of the first film was a dream or hallucination. But if he didn’t really die in 1958, how the hell has he survived in the woods so long? And why didn’t he ever contact his beloved mother? Especially considering how she’s been lurking around Camp Crystal Lake setting fires and murdering counsellors all these years. However if you ponder why he wears a mask and/or the version of his ‘death’ from Freddy Vs Jason, you can construct a rationale for why he disappeared into the wild woods and spurned human company. But at the end of the day, it’s not that big a plot hole and the movie moves fast enough so you don’t really have time to question it.

That is, unless you think he’s dead, in which case you’ve got a huge gaping continuity abyss to deal with. According to Paul, Alice disappeared 2 months after the end of the first movie so how in the name of Christ did he grow from a scabby kid into a full grown redneck mutant giant in just 60 days? Did he send off for one of those muscle building courses advertised in comic books and really go for it???

But ignoring the questions of revenge-fuelled zombie metabolisms and the abilities of the disabled to survive in forests unaided, my major quibble with Part II is the ending. Like the first, they go for the “phew its all over …. OH SHIT IT AIN’T!” final shock. However in this case it’s a bit botched. Although having Jason burst into the cabin in his unmasked glory is a great jump scare and looks terrific, the problem is we see him dragging off Ginny. But then Ginny awakes and Paul is missing, which leaves us wondering what the hell happened. Instead of a disturbing final mystery, we are left with an annoying question. The scene isn’t set up well enough to make sense of it as a dream – there’s no clear point at which it could have started - and you can’t help thinking why didn’t they just have Jason grab Paul.

But quibbles aside, this movie is the textbook slasher. It delivers the same suspense and thrills as the first but does enough differently to deserve to be called ‘Part II’. In short, it delivers everything a good sequel should.

And it has been claimed that this movie’s success was a contributing factor in the ‘80s outbreak of sequelitus. Even though the late 70’s had given us follows ups to blockbusters like Jaws and The Godfather, it’s worth noting that this flick predates even Halloween 2. So it’s fair to say that Friday 13th Part II opened the way for making sequels to smaller genre-based movies.

And of course, it gave the world Jason, who audiences were to keen to see him return. Hence work began on a 3rd instalment and Steve Miner, having done a bang up job on Part II, was called upon to helm it. What could possibly go wrong?