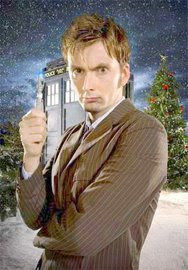 So it's been announced that David Tennant is leaving Doctor Who after the four specials in 2009.

When it was first announced he would taking on the role, my first reaction was "well, he's a bit young looking for the part". However I then remembered I'd had the exact same thought when Tom Baker took over the role, and we all know how well that turned out.


And indeed by the time "Tooth and Claw" (his third episode) had aired, I was in doubt the character was in very safe hands indeed. The common opinion (in my manor at least) was that although Ecclestone had played the role extremely well, Tennant had topped him - he wasn't just playing the Doctor, he WAS the Doctor!


And so I for one will be sorry to see him go. But he’ll have done 4 years, and 4 series (if we're counting next year's specials as a series), which in the Doctor Tenure League Table places him at a very respectable 4th place (do any numerologists out there want to make anything of all those 4s?).

Email ThisBlogThis!Share to TwitterShare to FacebookShare to Pinterest
Labels: Doctor Who