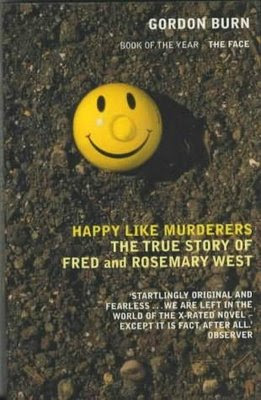 Gordon Burn's Happy Like Murderers (Faber & Faber 1998) is a very difficult book. At several points during reading this, the book was put down for several days and it was touch and go whether I'd return to it. But return I did, and eventually finished it. And I can't say I was glad to either - on one hand, it was good to get to the end of an exceedingly tough book but even after you finish it tends to linger in the mind for a good long while.

Anyhow, to the book itself - basically this an account of the lives of Fred and Rose West, the notorious UK serial murder couple. First thing to note, is that it is an account of their lives and not just the crimes they committed. It is closer to biography than most true crime books.
Secondly it it written in a style somewhere between a biography and a novel. This isn't to say that this is a fictionalized account of the proceedings, but it is does use a good deal of literary flourishes that are more commonly found in a novel.

When I first heard about this book, I was unsure of how this style would work. My feeling was that too much narrative and desription might overwhelm the facts of the case and possibly stumble into the tar-pit of unfounded speculation and outright fabrication in creating some scenes. However I can report that Burn has done an excellent job in crafting this work and manages to illustrate the events rather embroider them. Stylistically, Burn uses the repetition and variations of certain key phrases that sketch in atmosphere and psychological themes. Some readers may find these echoes in the text annoying, but I found them to an elegant device which highlight the progression of the West's crimes, illuminate the links between past and present events, and to reiterate recurring impressions and opinions.

Also it must be noted that this style does not in any way dilute the horror of the facts. For all the 'artistic' flourishes, the book never provides a comforting fictional veneer of the events of Cromwell Road. Neither does Burn go down the tabloid route. There isn't reams of sensationally written 'reconstructions' of the murders or pages of details from autopsy reports. The murders themselves are dealt with rather succintly - as there is scant actual detail about them. Fred West only really spoke about the specifics of disposing of the bodies, and the forensic evidence was limited due to the age and condition of the bodies discovered.

So what made this book so hard to get through? Although details of the murders are few, there is a lot known about life at 25 Cromwell Road, in the main from the recollections of three of the West's children. For this book, Burn extensively researched and interviewed family, friends and co-workers and has built up a detailed picture of The West's lives - not just the major events but their day-to-day routines over the years. And it is this emerging picture that is so upsetting to read.

Basically the Wests created within Cromwell Street a pocket universe which revolved around sex and sadism. The murders really are only just one part of a larger nest of horrors. Both Fred and Rose came from families where abuse; physical, sexual and psychological, were rthe norm, and their own household perpetuated this. Burn handles this material with the necessary sensitivity and steers a course away from lurid detail, but reading about how they not only abused their own children, but allowed and encouraged others to do so, year after year is very harrowing.

If you wish to understand the motivations and possible background triggers for the West's murders, this book does paint a very detailed picture. However it cannot be said to be the only book about the West you need to read.

The problem is that the actual investigation, arrest and trial are only very briefly examined in the final chapter. And although Burn has avoided speculation, and rightly so in the main, there are some issues where I felt some commentary was necessary. For example, the question of how many more murders, other than the twelve that went to trial, were committed really needed to be mentioned more fully. Similarly the issue of whether or not Rose was party to the murders also warranted remarking on.

Hence a reader who makes it to the end of this book, may be have to cast about for another account to get the complete picture. Now I'm in this boat, and though I feel I should while the facts from Happy Like Murderers are fresh in the mind, to be honest, right now I really don't want to read another book on the Wests.

So in conclusion, I would recommend this book if you have an interest in the West murders, but with the following reservations - that firstly it's highly upsetting and secondly will not give you a full view of the case.