FOLKLORE ON FRIDAY - The Ghost by the Gretna Green 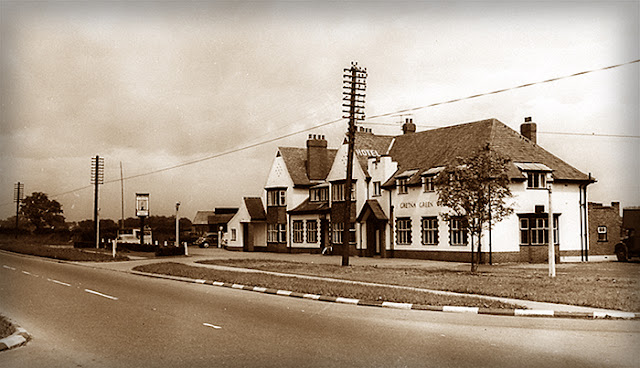 Some time ago I wrote a series of articles (which I later turned in to a podcast) on the assorted ghost stories associated with Aycliffe Village in County Durham where I spend a good portion of my childhood. One of these local ghosts was an example of a very common sort of spectre, the Phantom Hitcher. In the Aycliffe version, a young woman dressed in white is seen by the side of the road and hitches a ride, only to later vanish from the back of the vehicle.

Now the interesting thing I uncovered was that while the version I heard in the mid 1970s usually placed the lady in white near the village church and travelling in the direction of Darlington, the story actually dated back to the days of coaches and horses. Back then the A167 which runs through the village was the old Great North Road, and in the days when the coaches ran, the ghostly lady would hitching a ride north and vanish before reaching the nearby village of Rushyford a few miles up the road.

The village is also home to another well-known phantom, the Grey Lady. And over the years, aside from the oft-repeated creepy tales told about both these local ghosts, sightings of a white female figure have been reported in the Aycliffe village area. And recently a reader got in touch to relate his sighting of this strange white figure. It was seen a little to the north of the village, near what was once the Gretna Green pub, and is now back in business as the Gretna Hotel. His account is as follows -


I was with my friend Chris at the time, and both of us were about 9 year old. Both of us were living near to Neville Parade in Newton Aycliffe. Strangely we were out 'ghost hunting' and rode our bikes over to the Gretna pub which was derelict at the time. We spent a bit of time looking around before heading back over the road (A167). There is a path leading through a small field and then some woods back to the houses. Halfway up this path we stopped to look at a rag which was caught on some barbed wire on the fence that ran along the path (still in ghost hunting mode). After a few seconds I looked ahead into the field and saw a white figure kind of floating towards us. I shouted at Chris to look but he took this as an attempt to trick him or something and promptly rode off on his bike, so I don't think he saw it which was very frustrating at the time! I remember looking up again at this thing and it was a bit closer. I pretty much got straight on my bike and rode off as fast as I could.

So the thing is basically similar to what the other people have described. It was about 30 years ago so my memory is a bit blurry but I remember it being all white, wearing flowing, kind of raggy clothes but no distinctive marks. And the main thing was it had a white face with no facial features at all, which was really weird. Could a veil possibly explain this? It was kind of moving its arms slowly, and moving slowly towards me with very awkward movements from what I remember. Just really weird. It wasn't too far away either, maybe 30/40 feet away. Oddly, at the time I didn't think it was a ghost because it didn't strike me as what a ghost should look like. It didn't look very human, but rather humanoid - if that makes any sense - mainly due to having no distinctive features and the white face area. So I just told people I saw a kind of weird creature/alien/ghost thing.

Now people have obviously said I was 'ghost hunting' so my childish active imagination got the better of me. and I too have thought this could be what happened. That is, until recently listening to you podcast and reading the comments about other people's similar experiences in that specific area. So maybe I did really see something after all? I wonder now that maybe because I was ghost hunting I was more perceptive than I usually would have been. But maybe it was coincidence. I've had a lot of weird stuff happen to me over the years so maybe I'm just more tuned in to these things than some other people. Maybe this thing appeared to me because I was kind of asking for it and it somehow knew. And I just happened to be in a spot where something was hanging around and was able to pick up on that? Or maybe something there is causing people to hallucinate? Or maybe someone dressing up to scare people? Who knows! But at least now know I'm not the only one who's seen weird stuff there!

Very intriguing, I am sure you will agree. Now what struck me as particularly interesting is the detail that the figure lacked a face, for this would appear to be a common feature in most of the reports of the white ghost. Andrew Green in Ghosts of Today lists several encounters with a seemingly female figure dressed in a long garment and a hood but with no face visible within, and often described as moving oddly or even floating. It would seem a similar figure has been seen in the south end of the village near the church, in the surrounding fields, on the road heading north of the village, and even a good way up The Great North Road.

For those who may wish to investigate further, we should note that the area described in the above account has now been built on, and where there was once a field where a young boy saw a strange figure in white are streets of houses. One wonders if any of these residences have reports of unwelcome guests in white... 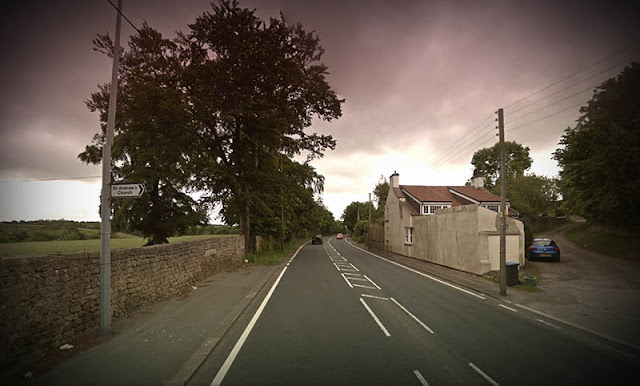