THE 'ORRIBLE 'OUSE OF TERRIBLE OLD TAT #27 - To the Planet Zeto and Beyond! 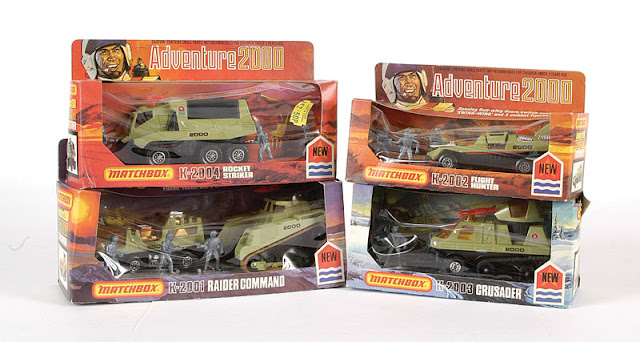 Welcome once again to the 'Orribe 'Ouse of Terrible Old Tat! Please step inside, but be careful! We've got the toy box out again and the floor is covered with little diecast metal cars at the moment! Now then, over the last few weeks we have been chatting about the Matchbox Adventure 2000 range, and this time, as you might have guessed from the traffic jam/war zone on the carpet, we're continuing the tale of these exciting little SF vehicles

Now Matchbox had been making toy cars and trucks since roughly the pre-Cambrian Era... Or 1953 at least. They had made pocket-sized, and indeed pocket-money priced, versions of all kinds of automobiles, and had even branched out into ships, planes and tanks. However Adventure 2000 saw the venerable toy makers making a bold new foray into a whole new genre, heading into the world of SF, and jolly exciting it was too. First  released in 1977, the initial range comprised of the K-2001 Raider Command (super cool all singing, all dancing all killing, all terrain vehicle), K-2002 Flight Hunter (flying space sports car), and the K-2003 Crusader (laser tank thingamajig). Coming complete with little plastic figures of space soldiers, this range were a huge hit for Matchbox, and as we saw last time, even took a starring role in a classic Judge Dredd comic.

As it was soon clear that they had a winner on their hands, naturally Matchbox were keen to expand the range, and therefore created a second wave of new vehicles for the Adventure 2000 line in 1978. The first addition was the K-2004 Rocket Striker, another very cool looking armoured truck with missiles mounted in a roof compartment. Now this was a nice looking vehicle, and a very neat addition to the range to be sure, fitting in nicely with its metal brethren. However in fact, it was a little bit of cheat, for this model hadn't been especially designed for the range. In fact, the same model had been doing the rounds since 1976 as the K-111 Missile Launcher in the Matchbox Battle Kings series - a range dedicated to modern military hardware. Basically the only change was that now the vehicle was a more olive shade of green and had the Adventure 2000 decals on it. But that said, it did fit in well, and you can never have too many missile firing vehicles, can you? 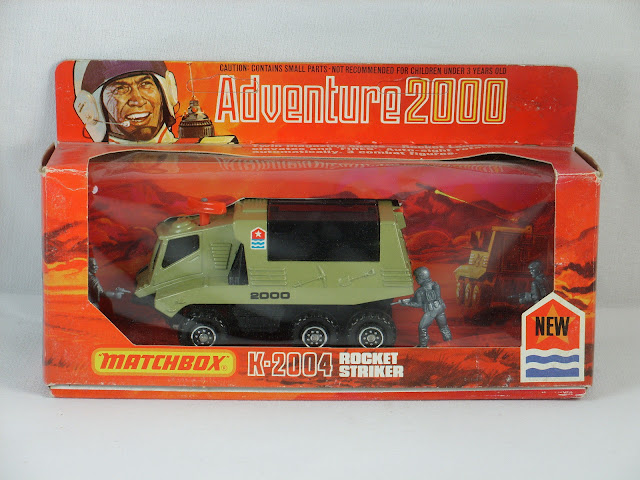 However Matchbox didn't stop there. For this new addition to the range was also available in a bumper pack with two other smaller vehicles. This was the K-2005 Command Force set, which comprised of the Rocket Striker plus the three smaller craft. These were the Rescue Hover Craft, the Planet Scout, and the Cosmobile. Now actually all of these three smaller craft had also previously appeared in different colours in earlier Matchbox ranges too. The Rescue Hover Craft was originally the plain old Hovercraft in the 1976 Matchbox 75 range, while the Planet Scout and Cosmobile had appeared in funkier paintjobs in the 1-75 range in, you guessed it, 1975. Plus this pair had also been moonlighting in the Super Kings range since 1978 too.

Also around this time, for probably the usual no good reason, some versions of the range came out with magenta tinted windscreens rather than the typical orange. As you might expect, these are somewhat rarer and hence go for larger prices if you're thinking of starting to collect this range. However there were more radical changes to come!  In 1979/1980 the brief flavour blurb that outlined a sketchy backstory for the range was changed from some vague talk about a future war to this - “The interplanetary commission prepares for an expedition to planet ZETO”!

And what did this mean for the range? Well, primarily it meant that the militaristic olive livery that had served the range so well since 1977 was now ditched in favour of a presumably more interplanetary deep metallic blue. Again this latest and indeed, last iteration of the range is considerably harder to find these days. This last wave of the Adventure 2000 range also added a final new vehicle which is one of the rarest of all these Matchbox models - the K-2006 Shuttle Launcher.

Now this last entry in the range was largely very similar to the K-2003 Crusader, however instead of a rotating laser turret, this half tracked behemoth sported a MASSIVE red plastic launcher on the the top. However this didn't fire piddly little Nemesis rockets like the Raider Command, but a HUGE round flying saucer! And of course, because of the highly breakable nature of the plastic launcher coupled with the tendency of flying saucers to get lost under sofas or in gardens, it is now very rare to find one of these babies intact out there in the wilds of either Planet Zeto or the even more hazardous environment of Ebay!

Sadly it seems the range was retired around 1982, but for a good half decade kids had had the hardware to wage ferocious future wars, skirmish with ravening muties, and explore strange new worlds with these wonderful models. Obviously thanks to its appearance in 2000 AD, the Raider Command is highly prized by Dredd fans, but all these unofficial die-cast progeny of the Landmaster are very appealing to collectors. They were so popular that they even inspired a rival range from competitors Corgi... but that is a tale for another day!