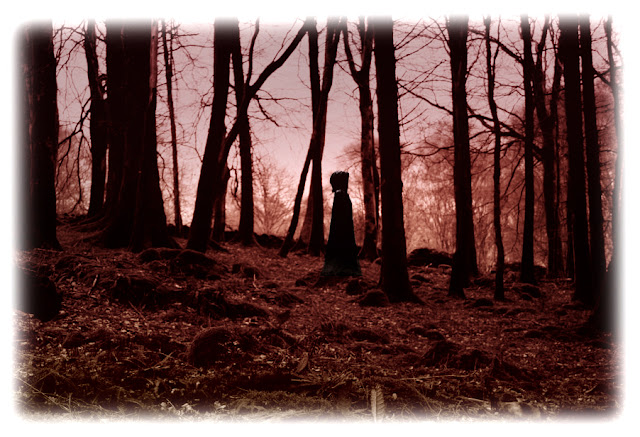 Over the past month, we've been investigating the tale of the Black Lady of Bradley Woods. We have looked at this well-known ghost's origin story, traced how various aspects of the legend have evolved over the years, and how this particular ghost story is actually still changing even in the 21st century. In fact. thanks the Black Lady legend appearing on the internet it would seem that the story is actually still gaining additional elements, with a notable example being the claim that there is an informal folk ritual to summon up the Black Lady.

In recent retellings of the tale, such as the one found on the Creepypasta Wiki,  it is alleged that if you go into Bradley Woods upon New Year's Day and call out "Black lady, black lady, I've stolen your baby" three times, the spectre will appear. However most write-ups of the Black Lady legend also claim that this particular bit of lore is another recent addition to the mythos. Now the Creepypasta Wiki version appears to have been posted first in October 2013, however this version was copied and pasted, more or less exactly, from an entry posted on another website Urban Legends Online. And this earlier article (which you can find here) by "Storyteller" who claims to live locally, was posted a couple of years before on September 13th 2011.

Now another, later version can be found on the website Lincolnshire Info which details historical places to visit. In this article on the Black Lady (which you can find here), which was posted June 11th 2014, you find the summoning recounted again, but this time with a slight difference -

Most people in the village believe that if you go to the woods on Christmas eve and say, “Black lady, black lady, I’ve stolen your baby” three times, the black lady will appear to you.

So then this later retelling has the special date for the summoning as Christmas Eve rather than New Year's Day. And the change in dates is interesting, for it mirrors some of the variations in the actual origin tale of the Black Lady. For as we saw in the first part of this series, some versions of the story place the tragic events of the Black Lady's origin as occurring on New Year's Day, while others allege it all happened one Christmas Eve long ago.

Now having discovered a variation,  I carried on looking for other mentions of the summoning to see if there were further variants. Naturally I was also searching for versions which predated the Creepypasta and the Lincolnshire Info articles. And apparently there had been an earlier version of the legend posted, but one on a now-defunct site Mysterious Britain.co.uk. However thanks to some web wizardry, I was able to locate an archived version of the page which was written by Paul A McHugh and posted in July 2011. And this version also gives the date for the summoning as Christmas Eve. However curiously, in this article's retelling of the Black Lady origin tale , the date of the tragedy occurring given is New Year's Day.

Naturally this begs the question whether the Christmas Eve summoning date is genuine lore, or just an error. For logically you would think that the summoning rite should occur on the anniversary of the tragedy. And it is easy to imagine that a writer might accidentally transpose the two holidays - for that kind of simple error is a very familiar to anyone who writes. However on the other hand, folklore is not known for kow-towing to logic at the best of times, and it is not uncommon for legends to contradict themselves. Plus generally speaking, the spooks and spectres of folklore often manifest annually upon a Christmas night - all over the British Isles there are tales of ghosts who only will appear on Christmas Eve or Christmas Day. And given the widespread nature of this Yuletide tradition of hauntings, it is actually perfectly plausible for the Black Lady legend to contain two seemingly contradictory dates.

So then, I continued to search for an older account that might shed some light on the matter. And on the site Ghosthits.com I found what appears to be an even earlier version. Now I have had no luck in working out exactly when this first appeared, but judging from the dates found in the rss feed for updates to the site, it was certainly published before June 2011, making it the earliest version so far. However this is not the usual version of the summoning rite we have seen repeated so far, but a far more detailed version, and one with some radical differences. You may read the full article here, but here is the relevant section for our investigation -

When my mum was a child she lived near Bradley Woods and this is one of the places she used to play. This was in late 1940’s. My mother’s story. When we were children we used to go to the woods and several of us would spread out and call her. We used to say “Black Lady, Black Lady we have your baby” and we used to shout this in turn. When the grey mist came we used to follow it through the cutting to the side of the church (St Georges, a Norman church). When she got to the church she would fully appear. She was a young lady and she was dressed in grey and she would disappear through a door at the side of the church, although there was no door there.

Now there are several interesting points here. Of course, as we are looking at the folklore of the Black Lady, we need not concern ourselves with the question of whether the spectre actually did appear when called. What is important for us is that local lore claims that she would. Secondly, it is interesting to note that while the rhyme is more or less the same - there is only a minor variation in the wording - there is no prescribed date or time for carrying out the ritual. However while there isn't an specific date for this version of the summoning, it is instead more closely tied to a particular location. And more intriguing still is the fact that this account alleges that this summoning lore was common knowledge to local children in the 1940s, despite accounts of it only seeming to surface in the 21st century.

This kind of dating issue is one of the key problems for folklorists, for folklore often exists as an oral tradition, and therefore a piece of legend or lore may have been in circulation decades before anyone formally writes it down somewhere. Now given that this account is the earliest mention I could find of the summoning, I don't think we have any particular reason to doubt its veracity. Had it appeared later, there could be a suspicion that it was an embellishment of the later lore. However given the dates, the reverse could well be true, with the later, and briefer versions being been spawned from some clumsy paraphrasing of this little article. But equally, the shift from being tied to a certain place to a certain date could well be down to the natural drift that occurs in folklore passed down through several generations, or simply multiple versions being told at the same time in the area.

However what is particularly intriguing about the above report from the 1940s, is the fact that it chimes very closely with details of tales told of the Black Lady that are not usually recorded in write-ups of the legend. Several alleged sightings of the Black Lady describe her as dressed in grey, and there are other reports of her appearing as mist. Furthermore in the comments on local historian Rod Collins' article on the Black Lady, there is even a report, dated as occurring in the 1950s, of some local boys encountering something terrifying in the lane by St George's Church that leads into the woods.

It is enough to make you wonder whether there really is something haunting Bradley Woods... However I think it is more than fair to say that the Black Lady has certainly haunted the imagination of local folks for generations, and given how tales about her are not only still spreading, it will be many years before this particular ghost is laid to rest. 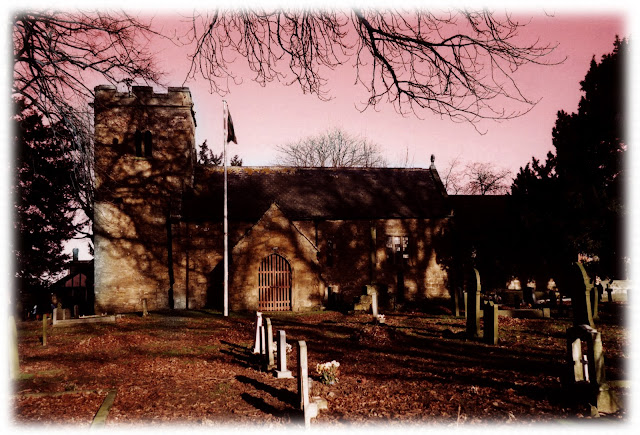