FOLKLORE ON FRIDAY - The Stones Are in Town! 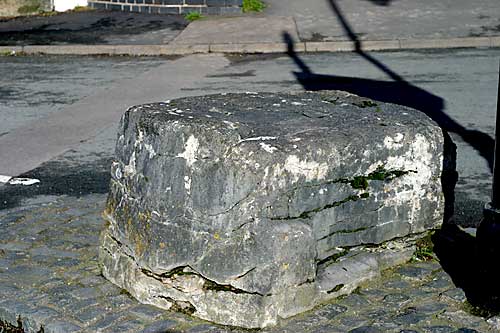 Last week we began exploring the curious legends of stones that move by themselves, and this time we are looking at two more such rotating rocks, both of which can be found in heart of English villages.

In the lee of the Malvern Hills in Herefordshire, just near the border with Worcestershire, lies the little village of Colwall. And as you drive through the village, you will see, literally in the middle of the road, albeit on a traffic island, a large squarish stone, known unsurprisingly as the Colwall Stone. As is traditional for such prominent rocks, there are local legends that is was the work of giants, or had been dropped by The Devil. However another tale claims that every night, at the stroke of midnight the Colwall Stone turns itself around, and according to some versions, Old Nick Himself comes to do the turning. Quite why the stone turns, and indeed why it should be one of the Devil's chores, local lore never actually explains. Much like many of the old stones we are discussing in these articles, in previous times when archaeology was much younger, it was guessed that the stone was some relic of our pagan past. However in the second edition of The British, Roman, and Saxon Antiquities and Folklore of Worcestershire published in 1852, the pioneering antiquarian and folklorist Jabez Allies writes -


There is a large block of limestone called Colwall Stone, situated by a cottage (formerly named the "Old Game Cock"), on the road-side at Colwall Green. Some have supposed that it was placed there in ancient times as a memorial of some event, or as evidence of some custom; but, upon my visiting the spot in 1846, I learned from a person in the neighbourhood, that his late father, Francis Shuter, and others, about seventy years ago, got it out of the limestone quarry, in a copse at the foot of the Wytch, and, assisted by a strong team of oxen, dragged it to its present locality; but whether it was brought there in lieu of a more ancient memorial I could not learn. It is four feet long, three feet broad, and two feet six inches thick; and I was informed that the landlord receives one penny a year rent for it.

And before we go any further, I should point out that the Wytch is a nearby place and not a local hag! So then, it is quite probable, given the local source mentioned by Allies, that in fact the stone had only been in place since around 1770. While we cannot rule out that the current stone was a replacement from an older monument, the fact that at that time rent was changing hand for the stone, one does wonder if it was some crafty ploy to give Colwall a bit of history and attract some antiquarian tourists. Certainly around this period there was a growing interest in Britain's past, and giving your home turf a bit of ancient history, the more mysterious the better, was a shrewd way to attract visitors.

However deliberate tourist trap or not, the tales about Colwall stone appear to be the standard lore that grow up around ancient megaliths ie left by giants, turning themselves. And given the stereotypical nature of the legends attached, and the extreme thinness of their details, I do rather suspect the stone, and the associated lore too, to be an 18th century *ahem* recreation,  rather than an authentic ancient site. 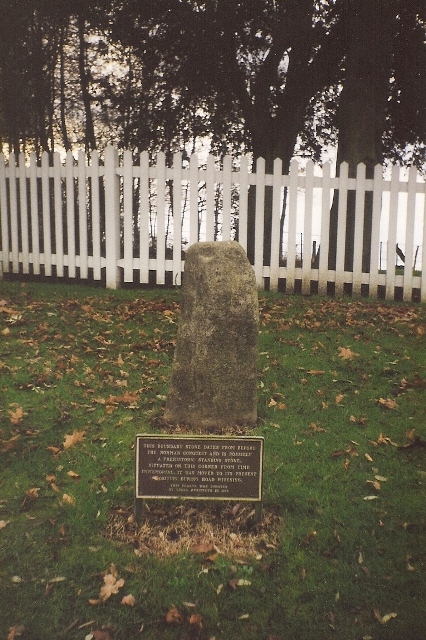 Another stone that has been presumed to be an ancient megalith but is actually thought to be a more recent addition to the landscape is found in the village of Pyrford in Surrey. This small standing stone sits by the side of a road and is now thought to be a boundary stone, and dating from no further back than Norman times. However this stone too is repute to revolve at cock crow or when Pyrford church clock strikes twelve. Again there are no other details or any other attached stories, so I rather suspect that this is another case of a local stone having common legends from other megaliths grafted onto it. Indeed this theory that the lore surrounding the stone has been transplanted is strongly supported by the fact that the only church in Pyrford, St Nicholas', doesn't actually have a clock!

However in an article Scraps of English Folklore, XII. (North Bedfordshire Suffolk, London and Surrey) by Barbara Aitken, published in  Folklore, Vol. 37, No. 1. (Mar. 31, 1926), her research conducting in the early 1900s turned up some rather more interesting local lore about the stone -

A gardener, a resident in Pyrford but not a native, said, "I expect it was put up in remembrance of someone being killed. There's a cross scratched on it, so I expect it's like kicking a cross. Don't you know that? I've been in many parishes, and they always kick a cross in the road where anyone's been murdered or killed in an accident." Here he made a cross in the dust with his foot. "If a man's been killed in an accident on the road, the policeman'll always kick a cross; and some people keep on kicking a cross in the same place year after year. There've been several people killed on Pyrford Rough, but no one seems to trouble to keep up the crosses."

Now that sounds far more like authentic local lore - indeed so far I've been unable to find more examples from other regions of this particular little tradition. While historians think the Pyrford stone is mostly an old boundary stone, this folk rite of kicking a cross would seem to indicate that rather than being considered some ancient relic with supernatural powers, this stone was thought to have more mundane connections, a community memorial for a death on that road.

However as fascinating as all of the above is, all it really tells us is that in the popular imagination the properties of revolving and turning were such a common feature of legends surrounding standing stones that this sort of story almost automatically becomes attached them, regardless of their actual history or folklore, in a similar way to how old empty houses quickly gain a local reputation for being haunted despite no one ever reporting ghosts and spectres there. But still we are no closer to uncovering the origins of these strange tales of rotating rocks. Next time on Folklore on Friday we shall look at some more ancient stones and see if we can shed any more light on this little mystery...

Further to my comment about the enormous stone (about the size of a transit van) in the field down the road. I mentioned the curious boulder to a relative. It sits beneath an enormous exotically shaped beech tree draped across a small river and is blessed with many low, extremely climbable branches. Thus it was extremely popular with generations of children until they tired of the old ways and presumably retired permanently to their games consoles.
He claimed that a school friend fell from an overhanging branch and smacked his head off the huge stone. Although unharmed, if a bit dazed, he was reportedly struck with a sudden attack of gigantism soon after. I presume the tale to be partly apocryphal.
ST.CLAIRE

As a keen cyclist, I sometimes like to take trips to my hometown and spin round all my childhood haunts. The village is surrounded by woods, marshland and farmland- ideal for young explorers. But not any more, it seems. All the little trails, short-cuts etc circumnavigating these are long gone. The woods, save one propminent, well manicured one loved by dog walkers, are visited only by the very occasional cyclist or runner, possibly trying to hang onto the only part of their childhood still within reach. The landscape is changed forever.
Even the track worn into the grass that bisected the main park has disappeared, a casualty of the dropped-off-at-school-in-the-car era.
And yes, there are humungous and seemingly out of place rocks. Abandoned, possibly forever by disinterested children. Except the ones related to me, that is...