FOLKLORE ON FRIDAY - The Riddle of the Churchyard Yew I 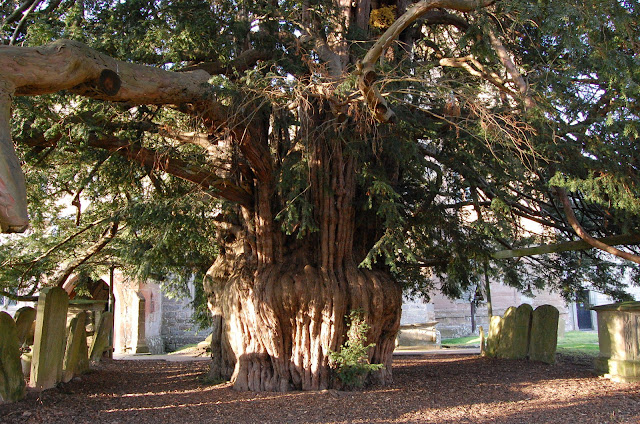 Come away, come away, death,
And in sad cypress let me be laid.
Fly away, fly away breath,
I am slain by a fair cruel maid.
My shroud of white, stuck all with yew,
O, prepare it!
My part of death, no one so true
Did share it.


A traditional feature in many churchyards in the United Kingdom is the presence of an ancient yew tree or two. And as attested by the quote from Shakespeare above, the yew tree (Taxus baccata) has long been cultivated in our graveyards, and borne an association with death and all things funereal. To summon up another literary example, the graveyard at St. Oswald's Church in Grasmere boasts eight yew trees planted by William Wordsworth himself. However the reason quite why this particular tree has been a favourite to plant in cemeteries for many centuries has been the subject of much debate over the years.

One of the first often proffered reasons is pure practical: in his epic work Observations on the Statutes (1766), the lawyer and antiquary Daines Barrington, has this to say on the planting of yews in churchyards -

Trees in a churchyard were often planted to skreen the church from the wind; that, low as churches were built at this time, the thick foliage of the yew answered this purpose better than any other tree. I have been informed, accordingly, that the yew-trees in the churchyard of Gyffin, near Conway, having been lately felled, the roof of the church hath suffered excessively

And indeed, there is a statute by King Edward I that does mention the planting of trees for this very purpose. However  in his article Yew Trees in Churchyards, which can be found in the volume Antiquities and Curiosities of the Church (1897) edited by William Andrews, the Victorian scholar TN Brushfield M.D. notes that the statute in question does not make a specific reference to yew trees, and moreover is actually concerned with the cutting down of trees in churchyards rather than a policy of deliberately planting them. Furthermore Dr Brushfield goes on to sagely remark that -

If even intended to act as a shelter from windstorms, a number would have been planted either on the side of prevailing winds, or a belt of them would have surrounded the edifice.

So then, we can dispense with the screen idea, and move swiftly on to the next oft-cited theory for having yews in churchyards. This next notion posits that yew trees were planted in churchyards so that the local parish would always have wood for bows and arrows. However in the same essay, Dr Brushfield neatly skewers this theory too, noting that -

The remarkable fact that the English yew did not yield the best bows, may be noted here. Stringent regulations were laid down in several statutes, to require merchants to import bow staves from foreign parts simultaneously with other merchandise. In the time of Elizabeth, the price of “each bow of the best foreign yew” was 6s. 8d., while that of an English one was 2s. Spanish bows were then considered by far the best, but history shows that they were required to be used by English archers to make them fully effective as weapons of war.

In addition to these very pertinent historical facts that argue against the bow theory, later connoisseurs of yew lore have noted that the usual single tree planted in a churchyard would not yield enough wood to be terribly useful for making weaponry anyway. Now one of the fascinating things about yew trees is their exceedingly long lifespans, and many of the oldest have been quietly growing by churches and in cemeteries. For these trees have avoiding being felled for timber or being cut down when land has changed owners. Indeed it is widely accepted that many of these churchyard trees are a thousand years old or more. And therefore as many churchyards yews are reckoned to be old enough to have been around when the long bow was a standard weapon of war, it is very telling that they show little if any sign of ever being harvested for this purpose. And in support of this, no parish records have ever come to light that detail either the harvest or sale of yew tree timber.

However this does demonstrate that the tradition of planting yews in our burying grounds is undoubtedly ancient. Now the third commonly cited explanation takes us into more sinister territory, for the yew is a tree with a dark reputation. And rightly so, for the leaves, sap, and even the wood of the yew tree are very toxic, and so it has been theorised that yews were planted in graveyards to discourage cattle or sheep from wandering in and grazing around the graves. However once again, the actual number of yew trees usually found in cemeteries rather argues against this theory. For a typical old churchyard will only be home to one or maybe two ancient yew trees, hardly enough to an effective botanical barrier for even a small churchyard, and are often located far from the edges of the graveyard. Another problem with this idea is the fact that exactly how toxic the foliage of yew trees are to livestock is somewhat unclear, with mixed reports coming in down the years, and even accounts of yew leaves being used to bulk out winter fodder for cattle with no ill effects. However perhaps most damningly, there is the fact that many churchyards have ancient walls surrounding them to do that very job in the first place.

Another perhaps more appealing theory moves away the allegedly practical reasons for yews in churchyards, and looks to more esoteric ideas. According to this different line of thinking, we are looking at the problem the wrong way - the real question is not why we plant yews in graveyards but why do graveyards appear around yew trees. For this particular theory states that yew trees were an important part of worship in British paganism and hence when the Christian missionaries came, they built their churches at the sites of the old temples, and hence ancient churchyards come with an ancient yew. 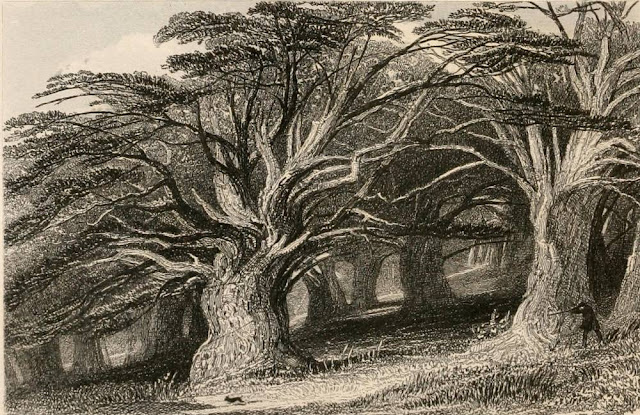 Now we do know that this kind of site conversion did take place. In fact at the dawn of the 7th century, we have a letter from Pope Gregory I written to the Abbot Mellitus, in which the Pope has these instructions for St. Augustine -


Tell Augustine that he should be no means destroy the temples of the gods but rather the idols within those temples. Let him, after he has purified them with holy water, place altars and relics of the saints in them. For, if those temples are well built, they should be converted from the worship of demons to the service of the true God. Thus, seeing that their places of worship are not destroyed, the people will banish error from their hearts and come to places familiar and dear to them in acknowledgement and worship of the true God.

And indeed there are many attested examples in Northern Europe where churches have been built on former pagan sites. However all the same, many scholars have taken exception with this explanation - partly because they claim there is a lack of botanical and archaeological evidence to back it up, but mostly because we know very little of the beliefs of the pre-Christian Britons. And hence the idea they venerated the yew tree is pure supposition. According to the Oxford Book of English Folklore (2000) by J Simpson and S Roud a more likely scenario is that -


the custom of planting yews in churchyards seems to have come with Christianity to Ireland and wales, in imitation of Mediterranean cemeteries with cypress and laurel

However once again, as soon as one finds a promising theory, it is not long before problems with it surface. In this case we ironically have the same lack of direct evidence that undermines the paganism theory. But a more obvious problem is that it mistakenly supposes that the planting of cypresses in European burying grounds is an exclusively Christian custom. For long before the rise the Christianity the cypress and the yew was associated with death and funerals: in the Classical world its branches were woven in wreathes to venerate Pluto the god of the Underworld, while in ancient Greece it was associated with Hecate, another Underworld deity. Now interestingly, long before Pope Gregory, the Roman empire had pioneered the practise of site conversion; for it was standard Roman practise to erect new temples at the native places of worship, usually finding an equivalent in the Classical pantheon to the local deity they were supplanting. So then given that Classical culture was spread far into the north of Europe thanks to the Romans, it would seem a more likely bet that the tradition came with them several centuries before the missionaries set out.

However why were these trees so closely associated with death and funeral rites in so many cultures? Next time, we shall explore the sinister associations of the yew tree and hopefully get closer to the heart of the riddle of yew trees in churchyards...